Remembering Bloody Sunday: Kevin Boyle and the lead up to 'the Derry march', January 1972

The civil rights march in Derry on 30th January 1972 and which would ultimately become known as ‘Bloody Sunday’ was first suggested by Kevin Boyle, an executive member and press officer for the Northern Ireland Civil Rights Association (NICRA). Born in Newry, Co. Down, in May 1943, Boyle was a central figure and witness to the rise of the Civil Rights Movement in Northern Ireland. Boyle’s biographer, Mike Chinoy, also positions Boyle at the centre of the rise of the human rights movement, not just in Ireland but internationally. A skilled orator, lecturer, barrister and academic, Boyle was the first full-time Professor of Law at NUI Galway (then UCG), in 1977, before becoming the founding director of the international NGO, ‘Article 19’, working on Freedom of Expression in the mid-1980s.

Boyle held numerous roles through the 1980s and 1990s, reporting on human rights abuses for Amnesty international, from South Africa, to Somalia, and the Gambia, as well as taking many cases to the European Court for Human Rights at Strasbourg. Later Professor and director of the Human Rights Centre at the University of Essex, Boyle’s (who died in 2010) vast archive is located at NUI Galway Library. Within it, are records not just of the NICRA (main executive committee and regional branches), People’s Democracy, and files of personal correspondence from the years and months through the late 1960s and 1970s, all which documents Northern Ireland political and social history from Boyle’s direct viewpoint and experiences.

At the outset of 1972 a programme of events, including marches, was drawn up by NICRA. It was Boyle’s idea to hold a march in Derry on the last Sunday of January 1972. North Derry Civil Rights, of which I was vice-chairman, would organise, one week before the Derry event, a march on the Magilligan internment camp. Since access by road was banned, the march went along Magilligan beach, where John Hume, who was to be our main speaker, confronted the British army commander on the beach near the camp. Those British soldiers were members of the infamous parachute regiment that would wreak such havoc in the Bogside eight days later ‑ Bloody Sunday.

Boyle was not present on the day of the march in Derry on 30th January 1972. In his statement to the Saville Enquiry Boyle outlined his memories of the lead up to the march. Boyle’s archive provides a remarkable insight into Boyle’s own role but also his memories of the events leading up to Bloody Sunday in 1972.

The inaugural meeting of the Northern Ireland Civil Rights Association took place in 1967. Boyle became active in the group in the following year. “ . . . after the march in Dungannon on 5th October 1968 . . . After that, the People’s Democracy (“PD”) was established by the students (of Queens University, where Boyle was then a lecturer) and I made the conscientious decision to join. PD was essentially an alliance of student socialists and the unaligned.” In the period following this and up to 1972, Boyle recounts “a polarisation” in public opinion. Boyle took a more public role and spoke at demonstrations, such as in Armagh. Becoming more disassociated with PD following the Apprentice Boy’s march in August 1969, Boyle took greater interest in the NICRA from the middle of 1970. (Boyle had previously been elected to the NICRA Executive in 1969 at the NICRA AGM held at St. Mary’s Hall, Belfast).

By December 1971, Boyle recounts the NICRA plans to hold more marches but also while recognising the risks that such events would bring. “It was clear the Rent and Rates Strike was not having the desired effect, and that we needed to do something more . . . the question of marching was mooted”. Boyle clarified that while some disquiet among the NICRA Executive as to where the marches would be held, “the decision that we took in December 1971 was taken reluctantly against an increasing background of violence. However we felt the pressure against the authorities needed to be stepped up”.

A meeting of the NICRA Executive was held on 14th January 1972, where plans for the Derry march were discussed. A date of 16th January was first discussed for the march before it being eventually postponed until 30th January. Boyle discusses the early planning of the March in more detail, from its stewarding to its route and rerouting through the city of Derry, being aware of risks from Unionist protesters against the Civil Rights march. “We would have been concerned that sectarian violence would result from the confrontation and this is probably why we chose to ensure that the march went to Free Derry Corner and not to Guildhall Square”. As Boyle further clarified, despite being central to the early planning of the march, and on wider matters of civil disobedience and peaceful protest during his time with the NICRA, what would unfold on ‘Bloody Sunday’ was not within the expectations of the Executive, nor did Boyle travel to Derry for the march:

At the time, no one had a sense that something major was going to happen at the march in Derry. For example, I was not present at the march, having stayed in Belfast to catch up with some academic work that weekend.

“At the time”, Boyle concluded: “We had no sense of a premonition of serious trouble at the march". When later pressed about his 'conscience' as regards the events on Bloody Sunday, Boyle responded in a considered manner, that:

What my conscience, how my conscience responds is, is something I'll have to decide for myself, it's a very complicated question. The point I would like to make is that twenty thousand people came to the streets of Derry yesterday. It wasn't three or four hundred people, determined militants who have no sympathy in or with the people. The whole of the Bogside and Creggan communities were on the streets in Derry, they wanted to be on the streets. That seems to me the best answer to those who say that it was irresponsible to organise demonstrations. The people themselves responded and they are the people that we in the end of the day feel responsible to.

In Hugh Logue’s article about Kevin Boyle, he reminds us of the findings and conclusions of Lord Saville and the enquiry into the events of Bloody Sunday and regarding those involved in organising the march:

Lord Saville’s verdict could not have been starker: “The firing by Soldiers of 1 PARA on Bloody Sunday caused the deaths of thirteen people and injury to a similar number, none of whom was posing a threat of causing death or serious injury.” And, he was equally clear: “No blame was placed on the organisers of the march, the Northern Ireland Civil Rights Association.

Boyle’s archive provides a remarkable window into the tragic history and memory of the killings of the civil rights marchers by members of the British parachute regiment. As we approach the 50th anniversary of Bloody Sunday’, a series of blog posts will examine the material held within Kevin Boyle’s archive, and which offers new insights into the lead up to and response in the wake of Bloody Sunday in Derry in January 1972. 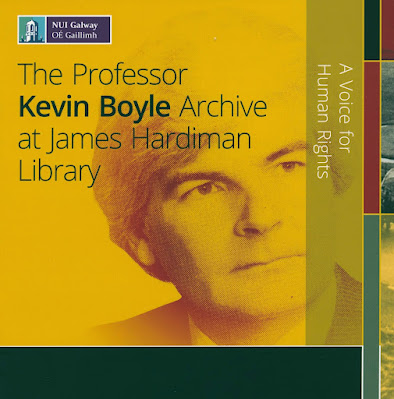