The Challenges of Audiovisual Archiving 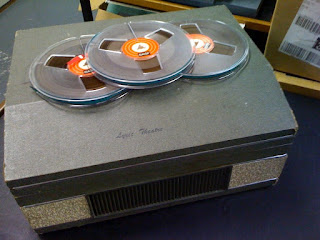 The Lyric Theatre archive holds over two hundred audio reels as part of the collection. These are mainly recordings of productions from the 1950s until the 1970s. Also included are reels with music and sound effects for various plays, as well as some miscellaneous recordings of radio programmes and the like. These reels will become a very useful resource for researchers, being as they are enduring records of the end-product of all the hard work of the company from its earliest days right through to its peak. However, archiving audiovisual material is a very different beast than working with traditional paper-based archives, and requires special efforts to ensure the long-term preservation of the material.
The reels were mostly recorded on the Lyric’s own reel to reel player (see pictures). The reels themselves have been stored fairly securely in the intervening years, with many still being housed in their original cardboard sleeves and boxes. These reels are artefacts in and of themselves, and have to be preserved as such. However, archivists are also responsible for making the information contained therein accessible. This can be achieved through digitising the reels, which will be a major project in itself. 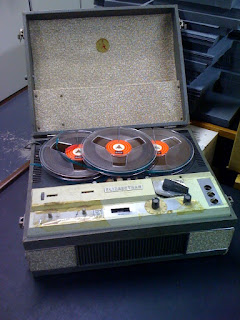 Digitisation of such material is time and labour intensive, but there is a strong case to be made for doing so. Most analogue formats are obsolete (or very close to being so), and it can be difficult even to source the necessary equipment to play them. From a preservation point of view, the longer they go without being digitised, the more the sound quality may have deteriorated. Analogue magnetic media (reel tape) has a life expectancy of just 30–50 years. Converting them to digital audio files makes them accessible to researchers and archivists quickly, conveniently and, if necessary, in a variety of formats. Finally, it also removes the need for physical handling of the reels – they can be stored safely in the archives while still being available for research.
It is hoped that the digitisation of the Lyric Players Theatre audio reels will begin in early 2011.
Sarah Poutch
Posted by NUI Galway Archives at 9:24 AM