In a week when Fine Gael is very much in the headlines, it’s perhaps a good time for a post on one of their most prominent supporters from the world of arts and literature, playwright John B. Keane. Keane was yet another of Mary O’Malley’s correspondents, writing to her in relation to the staging of his plays at the Lyric Theatre. He also sent her a copy of Man from Clare in 1963.
Keane, famous as a publican as well as a playwright, was born in Listowel, county Kerry in 1928. After being educated locally he worked in the UK for several years before returning home and establishing himself in the drinks trade. His eponymous pub is still in family hands to this day. It is of course though as a writer that he gained national and international recognition, writing such classics as The Field, Sive, and Many Young Men of Twenty. The Lyric produced The Field in 1966 and again in 1969, early recognition of a play which remains enduringly popular today. Brian Dennehy has recently received strong reviews for his portrayal of the lead character, the Bull McCabe, in the current Joe Dowling production of the play at the Olympia Theatre, Dublin.
As mentioned earlier, Keane was a lifelong supporter of the Fine Gael party. As well as dramatic works he also wrote essays and novels, and was a member of Aosdána. The presence of this correspondence in the archive demonstrates the Lyric’s seeking out and fostering of Irish talent, a tradition which continues to the present day.
Sarah Poutch 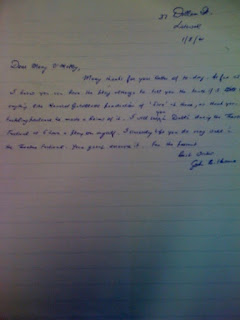 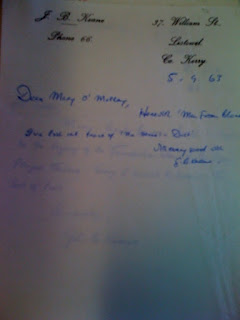