A real find this week is the Galway Arts Festival archive is the earliest press cutting in the archive. Taken from the Connacht Sentinel, 21 March 1978, the article is titled “Arts Group appeals to city councillors”. The article outlines the case for assistance and funding to the Galway Arts Group which is organising the first-ever Galway Arts Festival. Founding member of the Galway Arts Group, Ollie Jennings, who later went on to hold the post of Festival Director until 1991, made the appeal to Galway City Councillors to support this venture as the Arts Council had allocated a grant of £1,000 to establish an Arts Festival in Galway.
The requirements such as a venue to act as Festival headquarters, to establish a dedicated Arts Centre for Galway City and establish an annual Arts Festival are stated as being the key goals of Jennings and his group. The deliberations regarding funding from the various Galway city councillors is detailed and makes for an intriguing insight into the planning by a few of an event for Galway that would turn into one of the biggest annual Arts Festivals in Europe! 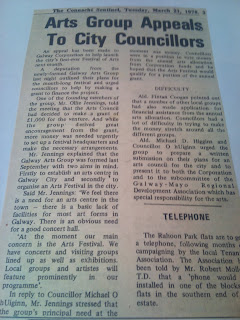