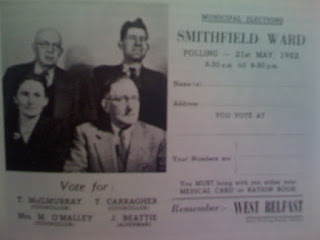 Mary O'Malley is best known as the founder of the Lyric Theatre and as a director, but she also maintained a deep interest in politics throughout her life. A lifelong supporter of the Labour Party, she stood for election to Belfast Corporation in 1952 as a councillor.
Belfast in the 1950s was of course rife with sectarian tensions. In her autobiography Never Shake Hands with the Devil, O'Malley writes of the perils of canvassing these areas, where one could ascertain a house's loyalty by looking for either a china John Bull in the window, or a picture of Robert Emmet! O'Malley was successul in her campaign, being elected with the highest vote out of the six contesting candidates despite being the only woman.
She was to find political life difficult and frustrating, being ostracised in certain quarters for her southern Irish origins and her republican views. However she was able to help in some areas, as we shall see in a forthcoming blog post.
Sarah Poutch
Posted by NUI Galway Archives at 10:42 AM