What brings together a Cork rebel executed one hundred years ago this week, the man who commanded the firing squad and esteemed Galway professor Liam Ó Briain appointed here at the then-UCG in 1917? As I write this, in May 2016, as the main period of 1916 commemorations winds down, it is hard for those of us in the historian’s trade to avoid the Easter Rising – even in our downtime! So it was that during my sojourn this past weekend in my native Cork that I happened upon a play entitled Thomas Kent: 1916 Rebel written by Ferghal Dineen and Eoin Ó hAnnracháin and produced by Cork-based company Lantern Productions https://twitter.com/lanternpro. 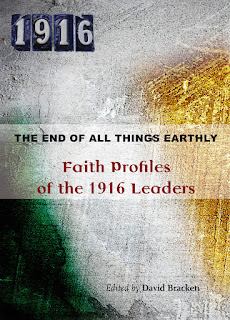 The play tells the story of the Kent family of Castlelyons Co. Cork, two of whom, the brothers Richard and Thomas Kent died as a direct or indirect result of a dramatic dawn firefight at the family farm at Bawnard on 2 May 1916. The play runs at the Everyman Theatre in Cork up to Friday 13 May 2016  and if you are near Cork this week, go. As one post on Twitter said ; ‘Laughter, tears, absolutely capitivating. Amazing work’.  I must admit an interest: Kent has been of interest to me these past months since I was asked to write a piece on his religious faith for an interesting new book, The End of All Things Earthly: Faith Profiles of the 1916 Leaders (edited by David Bracken and published by Veritas)

And the link to NUI Galway, you might well ask? It comes, indirectly, through our current exhibition A University in War and Revolution: the Galway experience now in its second month here in NUI Galway in the foyer of the James Hardiman Library.

One of the significant figures who features in the exhibition is Liam Ó Briain. Ó Briain was himself an Irish Volunteer who knew many of the executed leaders especially Seán MacDiarmada and  Michael Mallin who were executed in the same week as Kent. He lost his teaching job at UCD’s French department for taking part in the Rising, fighting at Stephen’s Green. Released from Frongoch prison camp in 1917, Ó Briain secured a post as professor of Romance languages at University College Galway (today NUI Galway) in 1917. The relevance to the Kent story in Cork though is a chance encounter in 1925 between Ó Briain and the British soldier in charge of the firing squad that executed Thomas Kent at Cork Detention Barracks on 9 May 1916.   Price, the solider whom Ó Briain met in Reigate, Surrey, in summer 1925, was the brother of Hereward T. Price, a British academic and old friend of Ó Briain’s, who had been a lecturer at Bonn University in Germany when the Irish academic has been there on a travelling scholarship in 1914.

Price’s brother, as a Royal Navy man stationed at nearby Queenstown, maintained he was in in charge of the firing squad in Cork in 1916. Price shows apparent regret for what he had to do. Ó Briain’s account –written in Irish and appearing in Last Words, a collection of material on the executed leaders’ final days put together in the 1960s by the Kilmainham Gaol Restoration Committee - states that Professor Price’s brother had remained quiet during Liam’s visit to his friend’s home in Reigate but made a startling confession to the Irish visitor as he accompanied him to the local railway station to catch his train. Apologizing for his awkward silence, the soldier Price, brother of Ó Briain’s colleague, said to him: ‘I was thinking if you knew a certain thing about me you might refuse to sit in the same room as me.’ Price told Ó Briain that ‘your business in Dublin caused a rare shake-up in the forces in Cork and, to make a long story short, I found myself in charge of a firing squad, the squad which executed one of your men.’ It was indeed Thomas Kent -‘ aye, that was the name’- and when asked how he died, Price added: ‘Oh, very bravely, not a feather out of him.’

Alongside the family dramas of the deaths of Richard Kent and policeman William Rowe and the execution of Thomas Kent in Cork in May 1916, the brief encounter in Reigate involving Galway professor Liam Ó Briain casts once again a human light on the dramatic events of the Rising and its aftermath. All the more reason, then, to visit our free exhibition in NUI Galway in the coming months!