In the archive we can see the role of Organisers in the 1950s is to spread the work and word of Muintir na Tíre in communities and to from guilds. There were approximately six organisers employed by Muintir na Tíre during this time. Each week the Organiser had to submit a report to Headquarters with regard to the weeks work and note if a new guild was formed. Below is a repot from O. Reilly who covered Tipperary, Kilkenny, Kerry, Kildare and Meath. These reports give a great insight into the communities that Muintir na Tíre engaged with and the issues that were facing guilds. 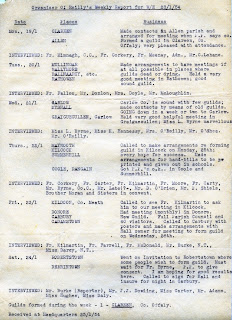 In the 1970s Community Development Officers were employed in the E.E.C. Pilot Project. Funding for the pilot project came from the European Social Fund. The project was focused on training community development workers in rural community work which led to employment opportunities through local enterprise. The project also focused on developing community councils, identifying community needs, organising local resources, linking of local resources to those available at higher levels and seeking to accommodate the local projects within the plans and programmes devised at statutory, regional and national levels of administration/organisation [Tierney p.158]. The Community Development officers advised on the creation of community councils and the identification of the needs and objectives of rural-urban societies. They operated in defined locations and worked closely with community council and provided them with training and a professional approach. A copy of Conditions of Employment for Community development officers can be seen below. They also provided weekly reports which are also in the archive. 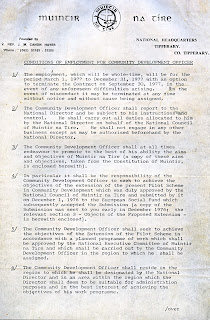 In the 1980s there were two types of employee’s in Muintir na Tíre. One of these was the Community Development officer who continued to focus on community development, supporting community councils and creating new councils. Kevin Hickey was employed by both Headquarters and Cork County Federation and his role and achievements in Cork is described below. 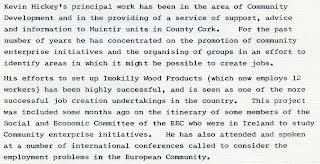 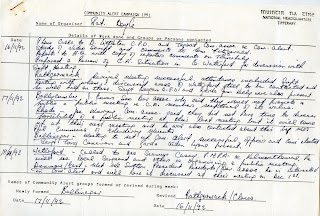 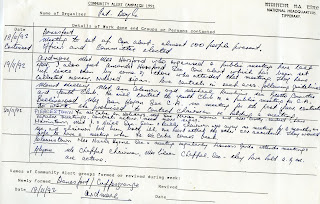 These reports provide a great insight into the development of community alert and the issues facing communities in rural Ireland.

The role of a community development officer to promote the work and word of Muintir na Tíre has been an effective tool for 80 years. This role is one of many common threads in the archive.