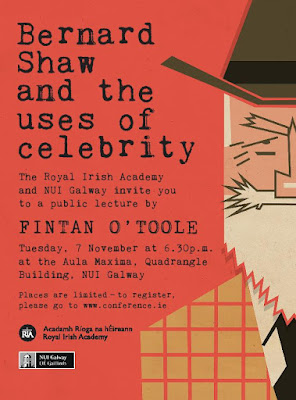 NUI Galway in conjunction with the Royal Irish Academy (RIA) will host a public lecture by Fintan O’Toole entitled ‘Bernard Shaw and the Uses of Celebrity’ to mark the publication of Judging Shaw on Tuesday, 7 November at 6.30pm.

The event will take place in the Aula Maxima at the University and will be followed by a panel discussion on “Making Judging Shaw” moderated by Professor Patrick Lonergan, NUI Galway with Ruth Hegarty, RIA, Barry Houlihan, Archivist, James Hardiman Library and Fintan O’Toole. 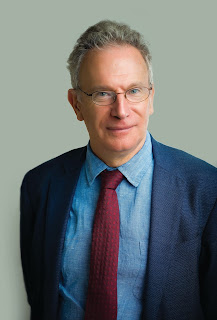 Judging Shaw is the fourth book in the Royal Irish Academy’s award-winning ‘Judging’ series and looks at the legacy of George Bernard Shaw (GBS), Nobel prize-winner for literature and internationally renowned playwright, intellectual and commentator.

The book, written by Orwell-prize-winning journalist Fintan O’Toole, traces the growth of ‘GBS’, the first great global brand, and discovers how Shaw created this most modern of concepts. Judging Shaw brings together a new insights on the making and invention of GBS, the complex relationships Shaw had with both England and Ireland, through times of revolution and after; reconsiders the ‘dark side of GBS’ as well as his death, commemoration and legacies. The illustrated volume features over one hundred digitised archival documents, sourced from institutions around the world, including NUI Galway’s digital theatre collections at the Hardiman Library, many published for the first time and which visualise the great achievements and also wide range of networks Shaw lived and worked in.

Also being unveiled is a new exhibition to coincide with the publication of Judging Shaw. Co-curated by Barry Houlihan of NUI Galway, Ruth Hegarty and Jeff Wilson of the Royal Irish Academy and Fintan O’Toole, the exhibition brings a wealth of archival images and stories from Shaw’s remarkable public and private life, drawing on many experiences such as time spent in the West of Ireland at Coole Park, the home of Lady Isabella Augusta Gregory, Shaw’s political and socialist writing, his theatre as staged in London, Dublin and also in Belfast after his death. The legacy of Shaw is considered in the ‘afterlife of GBS’, how his work was staged in contemporary times and how his life was commemorated. Before he died, Shaw noted those around him were ‘going Shaw-mad!’

The exhibition will be open to the public at the O’Donoghue Centre for Drama, Theatre and Performance, NUI Galway.

George Bernard Shaw has left a vast legacy of theatrical, fictional, polemical, critical and philosophical writing. The first person to win both a Nobel Prize and an Academy Award, Shaw bridges the Victorian era and the contemporary culture of celebrity. The GBS brand came to be recognised globally as referring to an Irish provocateur with a red beard and startling opinions. He was a master of self-invention, a nobody who captured the zeitgeist and one of the first private individuals to understand fully how to generate—and how to use—global fame.

Speaking in advance of the public lecture, Professor Patrick Lonergan, said: “We are delighted to welcome Fintan O’Toole and the Royal Irish Academy to NUI Galway to explore and celebrate the life and work of George Bernard Shaw. This university is deeply committed to preserving our nation’s theatrical heritage through our work in archives, allowing us to offer courses that give our students a unique behind-the-scenes perspective on Irish theatre.  We also are strongly committed to promoting awareness of that heritage through talks, publications, and other activities. This beautifully produced book and the fascinating exhibition that accompanies it will bring huge pleasure to readers and theatre-makers around the world, ensuring that Shaw’s legacies – as a dramatist and a political thinker – will have an impact for generations to come.”


Fintan O’Toole said: “Shaw had an ambivalent relationship with Ireland, but Ireland had a very ambivalent relationship with Shaw. He is by far the most influential, famous Irish person who has ever lived. There is no other Irish person that had the global reach that Shaw had. He is a vast terrain. It is a pleasure to see the book translated into an entirely different medium in the exhibition and one of the things that you see in it is that as well as being a great thinker, a great political activist, great dramatist, as well as that he was one of the world’s great posers.”

Admission is free but places are limited so please register go to www.conference.ie


Posted by NUI Galway Archives at 9:53 AM