An avid theatregoer in her youth, Mary O’Malley collected some interesting memorabilia of the Dublin theatre scene during that time. Two items which have recently come to light are evidence of this. As you can see in these images, the archive contains two small playbills advertising new productions in the Abbey Theatre in 1929 and 1937. 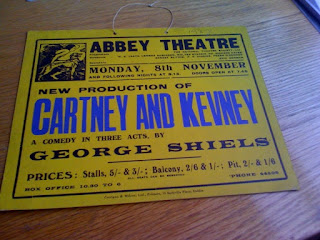 The first of these is a playbill for Cartney and Kevney by George Shiels, produced on the 8th November 1929. The Abbey Theatre archives reveal that this play had an outstanding cast, featuring actors such as P.J. Carolan, Barry Fitzgerald, Arthur Shields, May Craig, Eileen Crowe and F.J. McCormick. The play was directed by Lennox Robinson. The archives note that ballets were also performed on the nights this play was performed, by Ninette de Valois and her pupils. 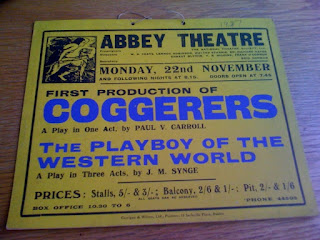 The second playbill advertises the opening night of Coggerers by Paul Vincent Carroll, being part of a double bill with the Synge’s Playboy of the Western World. This production featured Frank Carney, Patrick Considine, Josephine Fitzgerald and Eric Gorman. The director was Hugh Hunt, assisted by Arthur Shields.
Besides being wonderful examples of playbills of this era, these items have resonance in being stored in this particular institution, as NUI Galway Archives houses the Arthur Shields archive. This collection, which also contains much material on his brother Barry Fitzgerald, is available to researchers visiting the library. For those who would like to see more of this type of material, we have recently launched a wonderful online exhibition of images from the Shields collection, which can be viewed here.
Sarah Poutch
Posted by NUI Galway Archives at 12:57 PM