While Halloween may just be passing and the season of Samhain and the month of the souls begins, it is hard to ignore the many films, books and plays designed to scare and thrill readers and viewers. The season of Trick or Treat and ghosts and ghouls is especially remembered in Ireland by those writers and playwrights who inspire to scare. From Sheridan La Fanu to Yeats’ occultism to more recent works by the likes of Conor McPherson have thrilled their audiences by exploring the dark realms of the undead and the unknown. 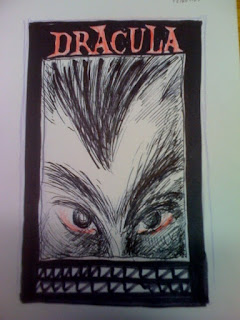 One piece in particular is by an Irishman who gave the world one of the greatest of horror stories. Bram Stoker’s Dracua has terrified young and old for generations. Druid tackled this work in 1986 and in doing so staged a version by the celebrated Frank McGuinness. Starring Sean McGinley, Jane Brennan, Maeliosa Stafford, Michael Ford, Maurice O’Donoghue, Brendan Conroy, Kate Hogan and directed and designed by Monica Frawley, the production explored the original 1897 reflection on the morality of late Victorian times.
The production file in the Druid theatre archive contains the original play programme, flyers, a copy of the script, colour photographs of the set, invitation to the opening night’s performance, press reviews of the production and colour artworks and drawings that were used as draft ideas for the play poster and programme.
In the programme a note by Frank McGuinness describes his thoughts on the evolution of the play: “The first monster s I met were made from celluloid; Frankenstein, Dacula, their brides and curse, daughters and revenge. . .What myth lies behind the powerful hold of Dracula on the European imagination? It is the poetry and power, not the period [of the story] that interests me, for Dracula belongs to a diseased universe, full of blood loss and bloodletting madness. He is not the source but a symptom of that universe, longing for its death.” McGuinness’s version is a powerful production and exploration of moral consequence, a failing human nature and lust for power. Through Frawley’s  hugely skilful design and direction it is a performance that was a success for Druid and not just owing to seasonal influences of Halloween: It was actually produced in April of 1986!

Posted by NUI Galway Archives at 11:43 AM