Signs of the Times


Advertisements are one of the seemingly inconsequential aspects of the historical material which archivists deal with. They are rarely the focus of attention, but personally speaking, they are one of my favourite aspects of archival work. Working with the Lyric Theatre’s programmes has drawn my attention to the history of advertising, and to the archival community’s efforts to preserve them as historical documents in their own right.
Modern print advertising has its roots in the newspapers of the seventeenth and eighteenth centuries, when classified ads of sorts began to appear. These simple descriptions of products gave way in the nineteenth century to illustrations and colour advertisements as technology improved. An early example of a brand which utilised these new tools was Pears Soap. A manager of the company, Thomas J. Barratt, recognised the potential of advertising and exploited it to great effect, eventually becoming known as the father of modern advertising. Pears advertisements based on the painting Bubbles by Sir John Everett Millais were one of the first long-term ad campaigns, running for decades. Other companies strove to create the same level of brand awareness, but lacked the time or creativity to do so. This led to the emergence of ad agencies, which promised results while allowing the companies to devote their time to manufacturing. 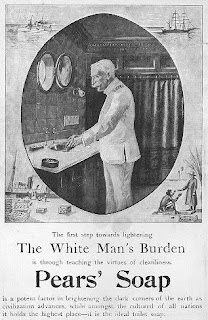 Each subsequent decade has seen the rise in the influence of advertisements. In real terms, we are now bombarded by ads daily – the vast majority of which we do not even notice, having grown so used to them. Looking back on adverts through the nineteenth and twentieth centuries though can be illuminating, throwing light on attitudes and popular opinion of the decade in question (the earlier Pears Soap advertisement on the right is a good example, from around 1890).
There are several websites I would recommend to anyone interested in this area, or indeed in art and the media in general. Since the 1970s the archivists of the History of Advertising Trust, based in Norwich, have been collecting and preserving UK advertising, and their website is well worth a browse. A slightly different but equally interesting project is Ghostsigns, which aims to preserve hand-painted wall adverts. For American advertising archives, Duke University’s digital collections contain a wonderful searchable online archive with images dating from 1840 to 1929. Lastly, the excellent website Vintage Ad Browser has over one hundred thousand digitised adverts available to view by category and decade – don’t click through to this one unless you have time to spare, as you are guaranteed to lose track of it.
Sarah Poutch
Posted by NUI Galway Archives at 10:04 AM