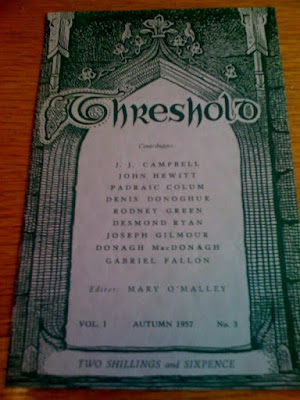 With theatrical productions up and running on a regular basis, Mary and Pearse O’Malley’s attentions turned in 1957 to the possibility of establishing a literary magazine to run in tandem with the Lyric Players Theatre. They felt that the theatre’s achievements were receiving scant publicity from the mainstream press and wanted to rectify this. Attracting more publicity was seen as the key to alerting the writing community of the existence of the company, and encouraging new works from them to produce. As well as this, Mary O’Malley saw it as a chance to fill the vacuum of literary magazines in Northern Ireland.
Mary became editor of the fledgling magazine, adding this hat to those she already possessed as theatrical director, producer, and local politician. John Hewitt became Poetry Editor. Settling on the title Threshold after the W.B. Yeats play The King’s Threshold, the first issue was published later that year. It contained a short story by Mary Beckett, articles by John Jordan and Roger McHugh, and poems by Pearse Hutchinson and T.P. Flanagan, amongst other pieces.
Threshold was met with positive comments by many reviewers, including those of the Irish Press, the Observer, the Independent and the Irish Times. The editors aimed to publish the magazine quarterly, a goal which was not always met due to lack of funds. Mary paid tribute though to her husband Pearse, calling the magazine his ‘brainchild’ and recognising that the effort put into it was repaid by the fact that the project introduced the Lyric establishment to many contemporary Irish writers and critics. These included Thomas Kinsella, John Montague, Brian Moore, Kate O’Brien, Patrick Galvin and Tom McIntyre. Future contributors would even include politicians, with Seán Lemass contributing an article in 1958. The magazine would also have a future Nobel laureate as editor when Seamus Heaney undertook the role in the late 1960s.
Threshold finally ceased publication in 1990, but future posts will explore its impact and discuss some of the contributors to the magazine.
Sarah Poutch
Posted by NUI Galway Archives at 12:26 PM