This week the series of slideshows continues, with some production photographs from the 1960s. As always, we welcome your feedback. Enjoy!

The O'Malley family assiduously kept records of their activities. In the case of their work establishing the Lyric, this means that from its very earliest days, photographs, programmes, and often even scripts and other such useful material were kept for each production. Quite apart from its appeal to academic researchers and drama enthusiasts, some of these aforementioned photographs are simply lovely to look at. The slideshow above consists of just some of the images from the Lyric Theatre archive here in NUI Galway, and are of plays staged throughout the 1950s.
Naturally these images may not be reproduced without permission.

Sarah Poutch
Posted by NUI Galway Archives at 7:53 AM No comments:


This week I've created a slideshow of images from early Lyric Theatre productions. These are from colour slides which have been stored in a Kodak box for over forty years. The earliest images are from productions at Derryvolgie Avenue, the venue within the O'Malley family home (1951, 1964). As production needs expanded the theatre experimented with staging productions externally at the King George VI Theatre, also in Belfast. Two of these productions are represented here (1962-3). The remaining images are from the first productions at the purpose built theatre on Ridgeway Street, a selection of plays by W.B. Yeats (1968).

Also of interest in NUI Galway Archives this week is an incredible online exhibition on Arthur Shields and family created by our digital archivist, Fergus Fahey, with assistance from Dubheasa and with an introduction written by Adrian Frazier.
I hope you enjoy the slideshow and as usual, please feel free to contact the archives staff with any research queries you might have.
Sarah Poutch
Posted by NUI Galway Archives at 3:48 PM No comments:

John B. Keane and 'Sive' - The Irish Dramatic Tradition

It speaks volumes about the skill and talent of John B. Keane as a playwright and also to the quality of local theatre in Ireland in the 1950’s,that the Listowel Players were the first English-speaking amateur drama group to perform on the stage of the Abbey Theatre. This particular bastion was the final and often unassailable frontier for so many Irish playwrights and actors alike. For Keane, his personal desire to see his works produced on the national stage proved an emotional journey.
Outside of Dublin, the midlands town of Athlone was to become a hub of theatrical activity when it began to host the annual All-Ireland Drama Festival in 1953. The finals comprised of nominated participants who were successful in regional heats nationwide. Festivals like those held at Scarriff, Charleville, Roscommon, Castleisland, Mountmellick, Enniscorthy and Glenamaddy, to name but a few,  were the first stop for many local and community groups determined to strike for glory in Athlone. When a young assistant pharmacist returned to Listowel in Co. Kerry from England and bought a pub, none could predict the success he and his many works would have.
John B. Keane settled in Listowel with his wife Mary. Keane recalled sitting down to write at 1:00am one morning and seven hours later, he had in his possession a draft of his new play, ‘Sive. ’ In this Spring of 1959, John B. Keane was unknown outside of his native Listowel. However, when the local Listowel Drama group began to present ‘Sive’ at amateur drama festivals, Keane’s name would soon find its way into the national headlines. 1959 would become known to many as ‘the Year of Sive’.
Success would follow this play wherever it toured. Reports from a production in the Clare Drama Festival in March 1959, taken from The Irish Independent describes ‘Sive’ taking first place in Scarriff, with adjudicator Michael O’ hAodha remarking that ‘Sive’ was, to his mind, “the greatest contribution to the Irish amateur movement since M.J. Molloy’s ‘The Paddy Peddlar.’
A report from The Kerryman newspaper, 28 March 1959 described the volatile scenes outside the theatre in Limerick city where “Sive was greeted with unprecedented enthusiasm. The house was full and the doors were locked half an hour before the curtain went up.”
All Ireland glory would follow for Sive and it took top honours at the Athlone festival in 1959.Sive would continue to succeed. Following its initital rejection by the Abbey Theatre, the Listowel players were invited to perform at the Abbey but contractually as an amatuer company - an unprecedented step in Irish theatre.
Sive was loved nationwide. Its tragic beauty and commentary on an overbearing patriarchal  and clerical- driven state, obsessed with maintaining a moral highground and traditions touched a point with an eager audience. The celebrated actress Siobhan McKenna saw Sive at the Olympia theatre, Dublin and declared the play would even be a success on Broadway if a backer could be found. McKenna described the play as ‘the most exciting play I had seen in a long time. The characters, the language and the absolute honesty of it, gave a true picture of Ireland, without insulting or ‘plamasing’ it”.
Some years later, in 2002, even after the passing of Keane himself, Sive, the play that brought Keane to the attention of the country, would again be produced and toured nationally. Druid Theatre Company staged Sive and toured it to Galway, Cork, Clare and Dublin. Directed by Garry Hynes, the production starred Anna Manahan, Derbhle Crotty, Ruth Bradley, Eamonn Morrissey, Barry Ward and others. The Druid theatre company archive holds the production records for the touring production of Sive. The playbill contains full cast details, original articles by Keane and commentary by Colm Toibin. Flyers, invitations and large posters present an iconic of the much loved Keane who had died prior to the production. The press files provide numerous reviews from Irish publications of the Druid production and provide a barometer by which to judge the public reception. The journey of Sive from Listowel in 1959 to the professional stage where it still remained in 2002 is a remarkable story and one that will always enthral audiences.
For more information on Sive, its history and legacy, listen to a special dedicated episode of RTE series, ‘From Stage to Street’ which discusses the legacy of Sive: www.rte.ie/radio1/stagetostreet/ and http://www.facebook.com/#!/FromStageToStreet
Posted by NUI Galway Archives at 9:45 AM No comments: 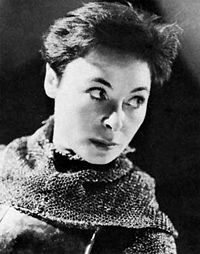 As my last post described, NUI Galway has acquired several important theatrical collections over the past decade or so, and is in the process this year of making them fully accessible through a cataloguing project. The aim is to create a cohesive body of collections for researchers of Irish theatre.and related topics. One collection which really illustrates the links between these archives is the Siobhán McKenna papers.
The gaeilgeoir and actress was born in Belfast but raised in Galway and Monaghan. She debuted on stage with An Taibhearc in 1940 as a teenager, and there followed an illustrious acting career. McKenna received Tony Award nominations for her roles in The Chalk Garden (1955) and The Rope Dancers (1958). But it is her definitive role as the eponymous St Joan by George Bernard Shaw that she is best remembered. Her portrayal was acclaimed as the best in memory by theatre critic Elliot Norton. First and foremost a stage actress, McKenna nonetheless appeared in several films, including Dr Zhivago. She died in 1986 at the age of sixty three. 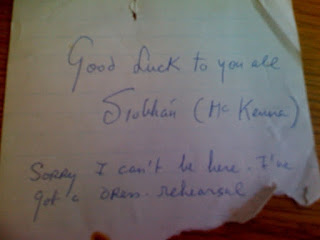 McKenna’s papers are currently being catalogued, but the links between this collection and that of An Taibhearc, the company with which she started her career, are clear. As well as this, there is a note from McKenna to the Lyric Players, written on their opening night at the Dublin Theatre Festival, wishing them luck. These are only the most obvious of connections; it will fall to researchers to discover more amongst the archives when made available.
Sarah Poutch
Posted by NUI Galway Archives at 7:49 AM No comments:

NUI Galway’s archives seeks to protect and preserve records of enduring value, and over the past number of years has placed particular emphasis on seeking to collect the records of individuals and institutions linked to the theatre and to literature. These archives are combining with courses such as the MA in Drama and Theatre to make NUI Galway an increasingly significant centre of learning in this field.
In September of 2010 two project archivists joined the existing Archives team of Kieran Hoare and Vera Orschel to proceed with a specific theatre listings project. Five months into this project, it’s time for an update!
The main collections concerned are the Lyric and Druid theatres, as well as the Irish language theatre company Taibhearc na Gaillimhe. Another collection being catalogued concurrently is the Siobhan McKenna papers, and the short-term future will see the archives of the Galway Arts Festival and the performance company Macnas join these numbers. Another very exciting theatrical collection which has been acquired by the University will be launched soon.
As of the end of January, cataloguing on the Lyric is well underway and will continue throughout the year, as will the Taibhearc and McKenna listings. Project archivist Barry Houlihan has done sterling work on the Druid archive, which is now complete, and will be moving on to the Galway Arts Festival collection shortly.
We are very excited at the progress being made and at the prospect that these important records will be made fully accessible to researchers by the end of this year. Watch this blog (and our Twitter feed) for more updates during the remainder of this project.
Sarah Poutch
Posted by NUI Galway Archives at 8:00 AM No comments: