The James Hardiman Library at National University of Ireland, Galway, hosted a seminar on Tuesday 4 October which told the story of the Abbey Theatre Digital Archive, created by one of the largest theatre archive digitisation projects undertaken worldwide. It reflected on challenges faced, lessons learned, new opportunities and impact on academic mission, library and archives.All talks have been recorded with audio podcasts available at the following link:https://digital.library.nuigalway.ie/islandora/object/nuigalway%3Aabbeydigitalseminar Slides from many of the presentations are available here:http://library.nuigalway.ie/about/events/past/digitisingtheabbeytheatrearchive/ 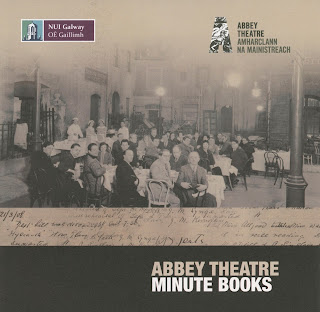 Posted by NUI Galway Archives at 10:34 AM No comments:

Welcome to this podcast from the Archives of the Hardiman Library, NUI Galway. This episode features a conversation with Professor Frank Shovlin, who shares his experiences and thoughts from extensive research carried out on the archive of writer, John McGahern.

In this conversation Frank discusses his engagement with the archive of the archive John McGahern and how that archive has influenced Frank's research.

Posted by NUI Galway Archives at 2:53 PM No comments:

Can Ireland Afford to Fatten a Sacred Cow? #ExploreArchives

Fifty years ago in the late 1960’s, Ireland was commemorating the 50th anniversary of the 1916 Rising. As with this year’s centenary celebrations, Ireland’s citizens contemplated the direction our nation was taking, considering issues like our nationhood, our place in the world, and the Irish language and its revival.

There were some who objected to the elevated status the Irish language received in school
curriculums and in public sector recruitment, on the grounds that Irish was not the principal language spoken in the state, and the large amount of time devoted to teaching it compromised the standard of education received in schools. An organisation called the Language Freedom Movement (LFM) was established who believed the State had an unrealistic attitude towards the Irish language, and noted there were few opportunities to speak the language in everyday life, while Irish-speaking areas were shrinking due to economic circumstances leading to emigration.

The Irish language became a highly emotive issue through the 1960s, and the growth of television broadcasting during this decade amplified the reach of the debate.

The LFM organised many public meetings, which tended to descend into total chaos. A public meeting organised in 1966 was advertised by a provocative poster, shown here. It depicts a bloated cow named ‘Gaelic Language Policy’. The cow is sprawled on an armchair named ‘Irish Education’.  A child is pinned beneath the chair, and the cow smokes a currency note from a large barrel filled with money. 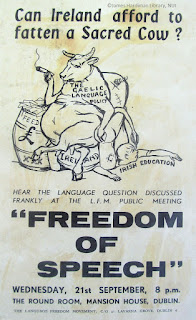 On the night of the meeting, approximately 2,000 people, mostly unfriendly to the organisers of the meeting turned up. An eyewitness commented:

“Union Jacks were waved derisively at the platform. On the platform itself was an Irish tricolour which a member of the audience made haste to seize at the outset, shouting that the national flag should not be displayed at a meeting of this kind. As he was hustled away, a shower of papers was flung at the stage, and a stink bomb was let off. Immediately after this, a fight broke out, involving about 10 men. It was evident there was going to be serious trouble unless something was done to lower the temperature”.

A report from RTE’s Seven Days programme shows some footage from one of the meetings.

The Language Freedom Movement continued their campaign into the early 1970s, with involvement in the by-election campaigns of the late 1960s, and involvement with parents involved in disputes with schools about education standards.

The archive is one of the collections in NUI Galway, which documents their campaigns, and correspondence with members of Connradh na Gaeilge and Gael-Linn. The archive is complemented by other papers relating to the time, notably the archive of Prionsias Mac an Bheatha, who was involved in the other side of the debate.

The collection can be viewed in full in the Archives and Special Collections Reading Room. 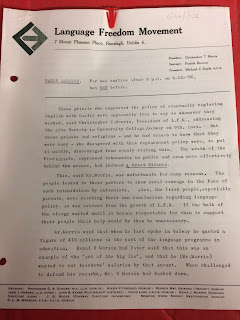 Posted by NUI Galway Archives at 7:12 PM No comments:

Today's theme looks at cars and the history of motoring in various collections. Being able to look back and admire the design and engineering of early cars in the twentieth century also prompts us to look at how the needs of motorists have also changed over the years. Records from the Galway Town Commissioner's ledgers of minutes and correspondence (Collection LA4) show how in 1918, as the War was still ongoing in Europe, a concern for the local Town Commission was the level of damage being caused to local roads owing to the increased volume of army vehicle traffic. Read the entry from the volume in full below: 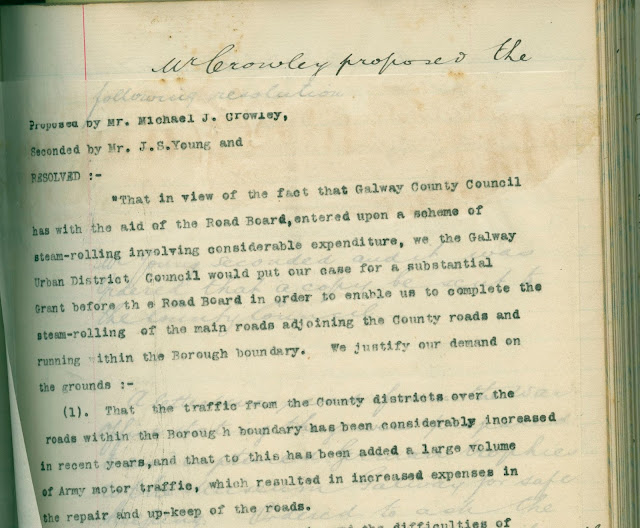 Some other items and images of interest are from the photographic archive of Jean Ritchie and George Pickow. Ritchie was a celebrated American folk singer, who was part of the famous 'Singing Ritchies' family of Appalachia area of America. On Fullbright scholarship trip to Ireland in the early 1950s, Jean travelled around Ireland collecting folk songs from various individuals. Accompanied by her husband George Pickow, their trip records not only the image below of Jean with, perhaps, a Daimler car in 1953. (A positive I.D. on the make and model of the car is welcome!) 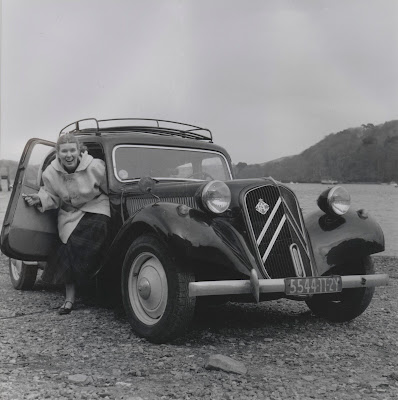 Also of interest within this collection are wonderful images of Dublin's O'Connell street in the early 1950s. We are used to seeing Dublin's streets choked with traffic today but we can but imagine the quite recent past of the 1950s where bicycles far outnumbered the number of cars on Dublin's main thoroughfare. These images show another side of Irish society, before the motor car became the primary mode of transport in today's society. It is also of the period between when Dublin's original tram system was removed and today's modern LUAS was reinstalled onto Dublin's streets. 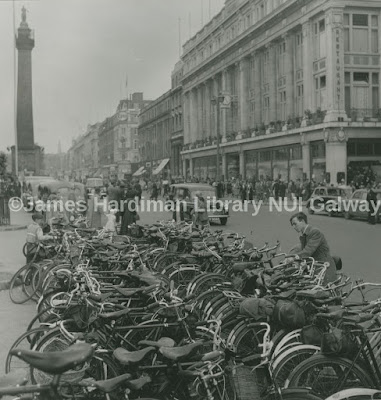 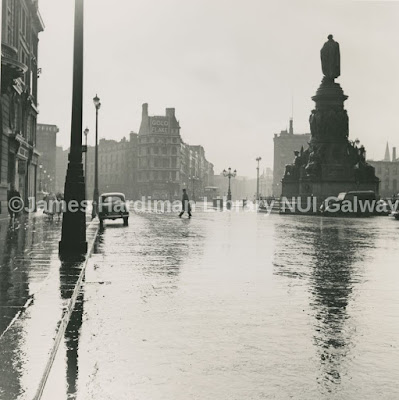 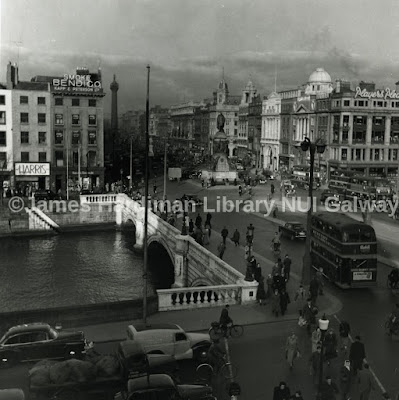 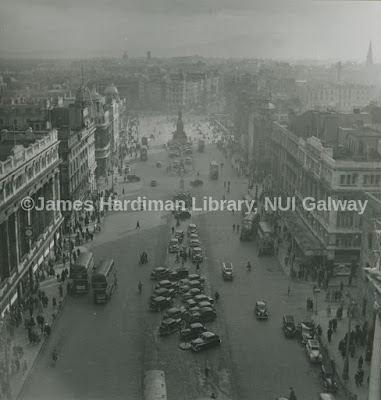 Did a Hollywood star come to UCG in 1928? - Explore Archives

The visitor book of Queens College Galway/University College Galway is a record of all guests and notable visitors to campus for the years 1877 - 1928. A simple volume like this was in use when the campus comprised only the Quadrangle building we know today but carries huge significance within the hundreds of signatures within its pages. The book covers a span of years that was revolutionary, in many senses, in Ireland and for the University with its place within the network of 'Queen's Colleges' of Ireland and the U.K.

Through the years the book was in use, it witnessed the growth of the University, the rise and fall of Charles Stewart Parnell, the reign and later death of Queen Victoria, the 1916 Rising which had ripple effects across the west, the first world war which saw staff and students of the college enlist and also die on the battlefields of Europe, the 1918 Election, and other major events through the Revolutionary period in Ireland, through to the late 1920s.

The book has been on display in the Archives and Special Collections Reading Room for much of this year as a centre-piece of the exhibition, "A University in War and Revolution: 1913 - 1919". A truly unique occurrence happens in August 1899 when both Pearse brothers, Padraig and William, sign the register as visitors to campus. It is a rare occasion in history where both brothers' signatures are signed side-by side.

However, another curiosity occurs at the very last entry in the book. Dated 1928 is the signature of 'Douglas Fairbanks', Hollywood, Cal[ifornia]." There is no available information as to why Fairbanks, one of the most celebrated actors of his generation at the time was at UCG. Fairbanks was married to actress Mary Pickford at the time, who had Irish roots. Was he here as a guest of the President of the University or an academic? Was he on holidays in the region at the time? Or was the signature a prank by a student of the day?! Any film buffs out there who might have any clues, do let us know.

Posted by NUI Galway Archives at 3:52 PM No comments: 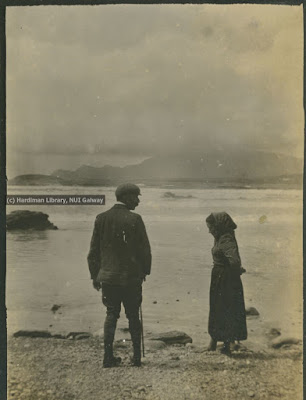 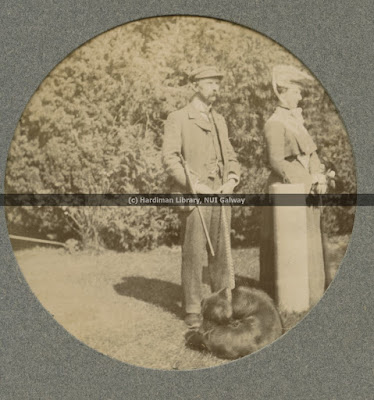 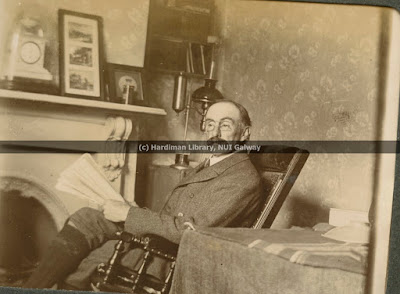 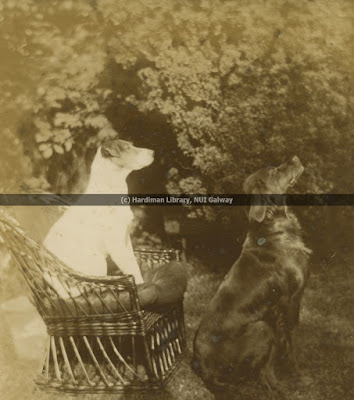 Posted by NUI Galway Archives at 10:22 AM No comments: 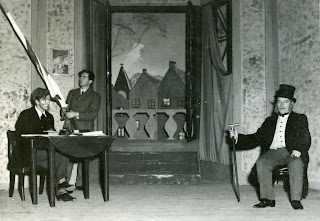 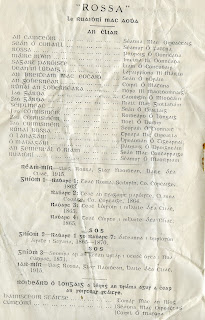 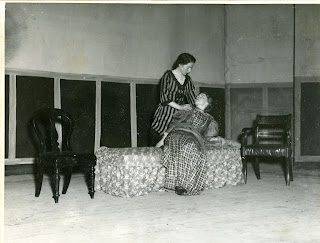 Lasairfhíona Ní Mháille, Imelda Ní Dhonnachadha (200x150mm)
[James Hardiman Library Archives: Taibhdhearc Collection:T1/E/50 (2)
﻿
The play opened and closed with Padraig Pearse's graveside oration, with the action moving from Cork, to Dublin, to England and America in the next three acts. 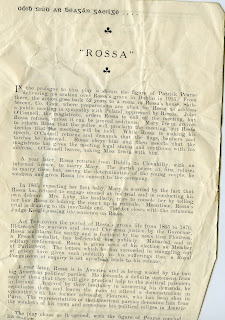 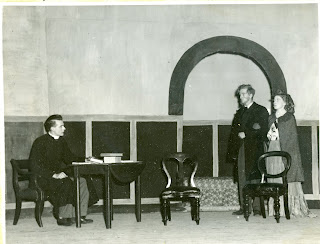 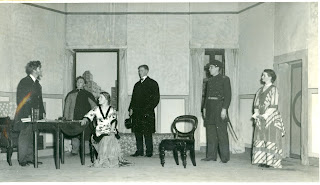 Posted by NUI Galway Archives at 9:58 AM No comments:

'Explore Archives' Week 2016 - Where We Started

This week is the national 'Explore Archives' week. Archives services and repositories all over the country will be delving into their collections and sharing some new stories and rare items from their collections.All this week the Archives of the Hardiman Library will share some highlights and seldom seen items from our collections. Our archives range in date from the late 15th century to present day and cover a wide range of topics from the development of Galway city, the culture, landscape, language and music of Connemara and the West, great Irish writers, theatres and actors, as well as more modern records stemming from the years of conflict in Northern Ireland.For this first post we go back to where we started. Queen's College Galway, as we then were known, was founded in 1845 and opened its doors to a first cohort of students soon after. Our first Librarian was James Hardiman, historian and book collector and our University Library still bears his name today. The University Quadrangle is a proud link to this early University heritage and you can look back at a recent programme of Building Ireland (avauilable on the RTÉ Player) where the architectural history and original plans of the Quadrangle are featured.
Here are a selection of images exploring our University history and we will share more posts exploring our wider archives throughout this week. Stay tuned for more stories from the Archives! 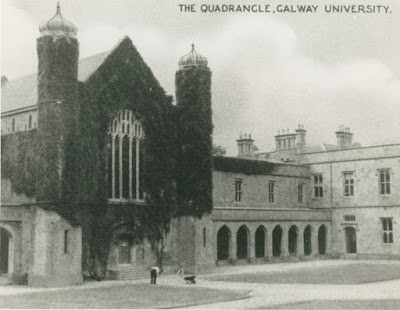 Posted by NUI Galway Archives at 11:49 AM No comments:

To coincide with Before 1916: Robert Lynd and visions of Ireland to come, a seminar taking place in G010-G011, Hardiman Building, on 4 November, a selection of publications by Robert Lynd, Tom Kettle, Katherine Tynan, Stephen Gwynn and other contemporary writers is on display in the foyer of the James Hardiman Library. 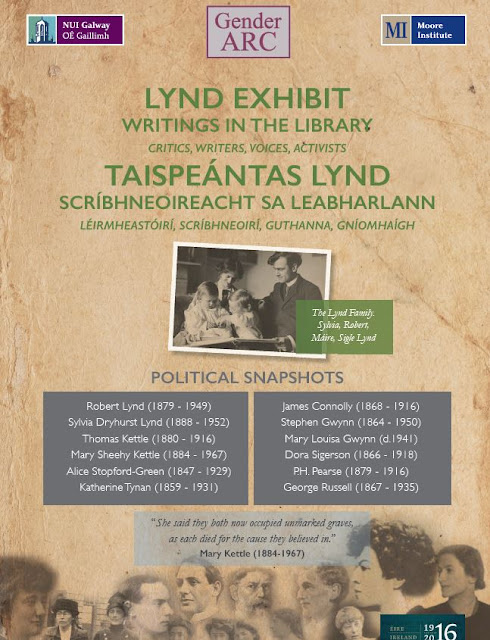 Posted by NUI Galway Archives at 3:07 PM No comments: