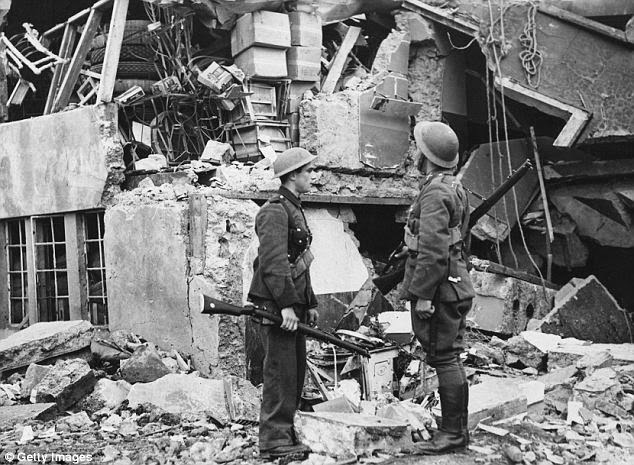 A great conference upcoming here on campus at NUI Galway, coming at the 75th anniversary of World War II, will focus on it's place in an Irish context, known as 'the Emergency'. With renowned international and Irish keynote speakers including Robert Fisk, Brian Girvin, T. Ryle Dwyer, Mervyn O'Driscoll and Michael Kennedy, as well as a wide range of academics and scholars, it promises to be a really interesting two days. For full conference details click here.
Posted by NUI Galway Archives at 11:59 AM No comments:


Spotted on the online film archive of British Pathè recently is this gem of a film regarding the return of the historic mace and sword of Galway City. The sword and mace, both beautifully crafted by local silversmiths in the early 17th Century and early 18th Century respectively, with the great mace being presented to the town of Galway by Edward Eyre, Mayor of Galway, in 1712.


When Galway Corporation was dissolved in 1841, and as the Pathè film recounts, the then Mayor of Galway was owed considerable salary in arrears and he was given the two insignia." The items were later sold to an art dealer by the daughter of the Mayor and the mace and sword were eventually bought by American newspaper tycoon, William Randolph Hurst. The mother of Hurst, Phoebe Elizabeth Hurst, neè Anderson, was of Irish lineage with her family having connection to Galway.

Prior to this transaction of sale of the mace and sword, it was noted in the Galway Observer, January 28, 1933, that: "It is learned that the Galway Urban Council has been in communication with a Government Department and has represented to the latter the necessity for purchasing the Sword and Mace of the Old Galway Corporation and housing these in the National Museum. The Government reply, while non committal is couched in sympathetic terms.

Through the recent reports in the public Press in reference to the discovery of the Sword and Mace of Galway Corporation and their presentation probably when recovered to the National Museum, the epithet "Blakes of Galway" has come again into popular prominence says the "Tuam Herald" the student of history may remember these historic emblems occupied at one time their allotted positions in the local Council Chamber, until 1841, when through the passing of the Municipal Corporation Act the Corporations of Galway was dissolved. At the time financial stringency was so acute that the salary £8,000 due to the Mayor, Mr. Edmund Blake was liquidated before the Corporation went out of office by the handling over of the Sword and Mace to the Mayor. When Mr. Edmund Blake died in 1905 the sword and mace came into possession of his daughter, Miss Anne Blake, who decided to dispose of them a few years after. The Civic Emblems were then sold to Mr. Louis Wine, art dealer, of Grafton Street, Dublin, who now possesses them."

The mace and sword were purchased in 1938 by Hurst and did end up going to America to reside in Hurst Castle, San Simeon, California and there they remained until 1961 when they were returned to Galway by the Hurst Corporation, following the death of William Randolph Hurst in 1951, as a gesture to the city and people of Galway. The ceremony to mark this event was attended by a large crowd and took place at the Aula Maxima here on campus of then University College Galway. The ceremony was attended by Taoiseach Sean Lemass and Mayor James Redington of Galway.

Press coverage of the return of the mace and sword from the Milwaukee Sentinel can be read here and Here.

A wonderful and in-depth article on the history of the Galway civic mace and sword, written by past Professor of History here at NUI Galway (then U.C.G.) Prof. G. A. Hayes-McCoy, "The Galway Sword and Mace" and is published in the Journal of the Galway Archaeological and Historical Society, Vol. 29, No. 1/2 (1960), pp. 15-36. (For those of you with Jstor subscriptions it is available to read here)

Today and since their return, the Galway Civic Sword and Mace reside here in Galway and are in the Galway City Museum. Great to have them here at home!

for more on the Archives and Special Collections of the Hardiman Library, click here.
Posted by NUI Galway Archives at 10:57 AM No comments:

Small Nations and Colonial Peripheries in World War I: Europe and the Wider World 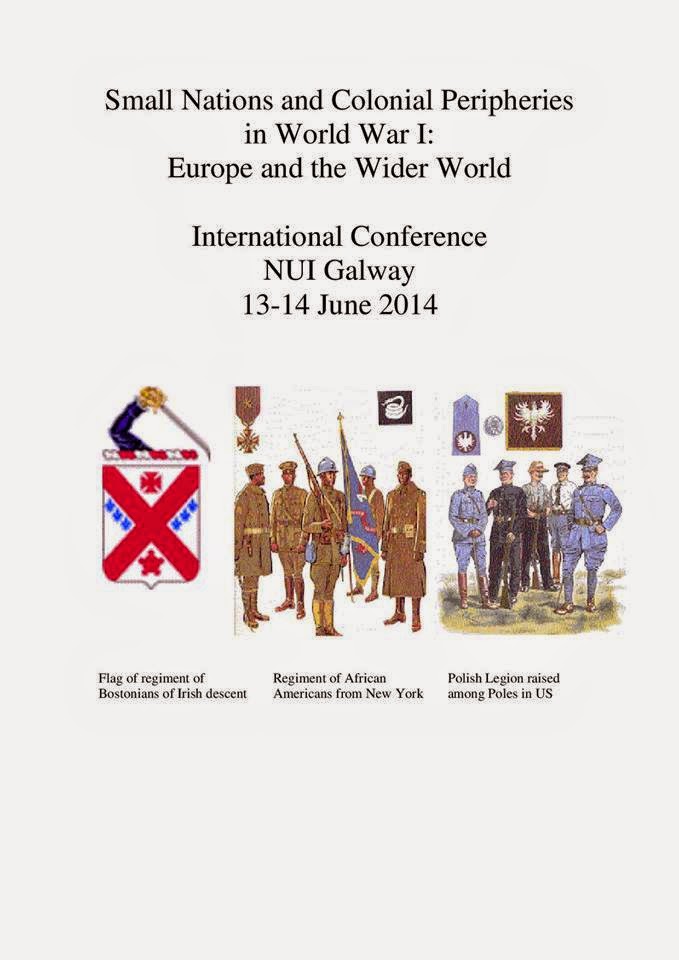 Here are details of a great upcoming conference being organised by the Department of History, NUI Galway. "Small Nations and Colonial Peripheries in World War I: Europe and the Wider World". The conference will provide a forum of debate for transnational and comparative approaches to the history of small nations and Europe's colonial peripheries in World War 1 in the context of the epochal changes brought by the collapse of large imperial states. 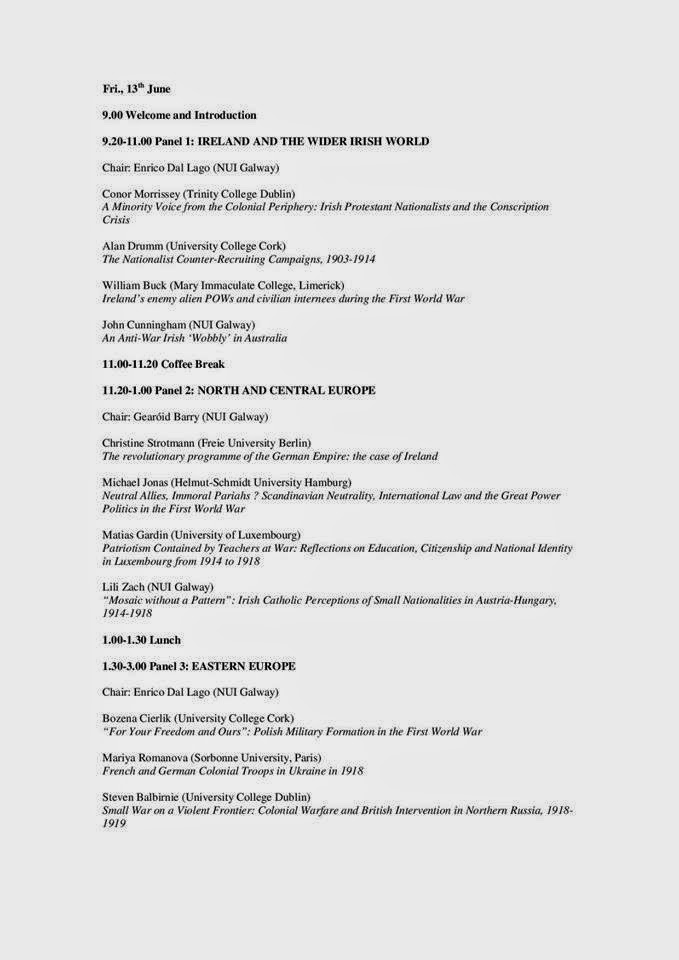 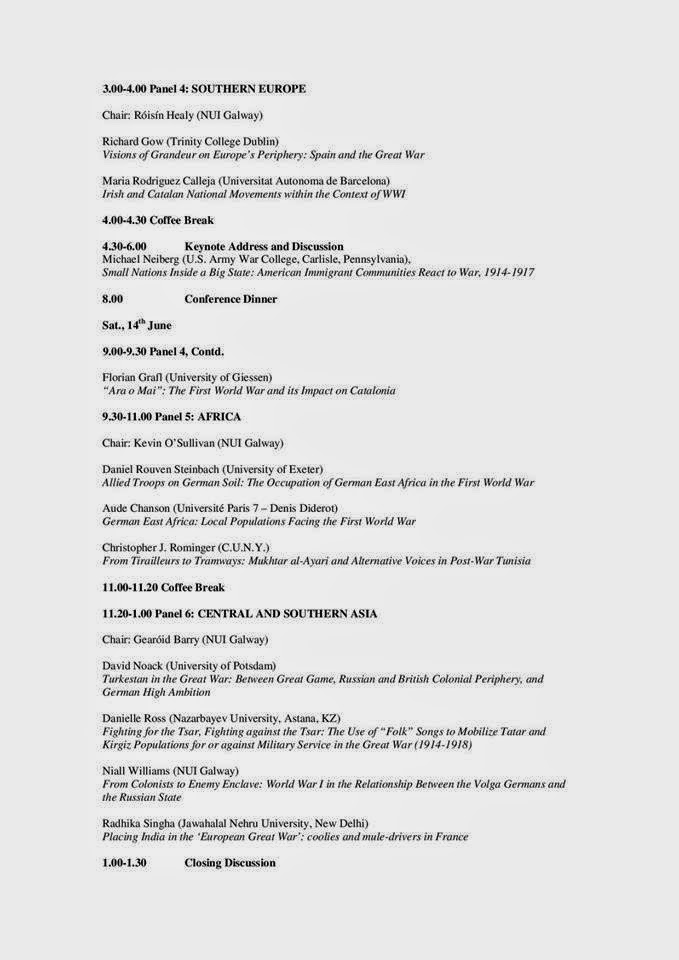 On the 1st May the Hardiman Research Building was officially launched by Minister for Education, Ruairi Quinn, T.D. The Hardiman Building is an exciting development and a key departure on campus that will unify research and unique resources in the Hardiman Library and with Humanities and Social Sciences at NUI Galway.

Located next to the Hardiman Library, the new Research Building comprises the new home for Archives and Special Collections, Digitisation, Research Support and other Library services as well as creating a collaborative space for research through the Moore Institute for Research in the Humanities and Social Studies and the Whitaker Institute for Innovation and Societal Change. The Moore Institute is a leading voice in digital humanities, medieval and early modern history and literature and travel and cultural encounter. The Whitaker Institute, honouring the enduring contribution of public servant T.K. Whitaker, is the largest national business and social science institute on the island.

Part of the launch of the Hardiman Building is a showcase exhibition, "Performing Ireland: A Digital Journey Through Irish Theatre", the first from the ongoing major digitisation project of the archive of the Abbey Theatre. More on the Abbey Theatre archive can be seen here.

You can read more on the exhibition and the launch in the Irish Times here and also watch RTÉ news coverage here. 'Morning Ireland' on RTÉ Radio 1 also carried a feature on the Abbey Theatre exhibition and this can be listened to here.

Here are a selection of images from yesterday's launch of the Hardiman Building.

Posted by NUI Galway Archives at 10:15 AM No comments: