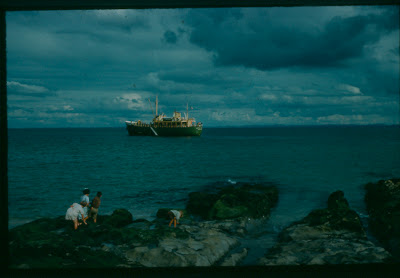 A new exhibition is opening at the James Hardiman Library, NUI Galway, to display and share some of the treasures and unique material of the J.H.L. Archives and Special Collections and also of the Galway Harbour Commissioners.

A display of archival material relating to the history of Galway Harbour, takes place in the foyer of the James Hardiman Library, NUI, Galway from the 29th June - 13th July. Containing material from Galway Harbour Commissioners and from  a  varied cross section of the holdings of the James Hardiman Library, the display will chart the growth of Galway's harbour from medieval times to the present day. The exhibition is open 8.30am - 10pm Mon-Thurs, 8.30am - 5.30pm Fri, and 10am - 5pm Sat. 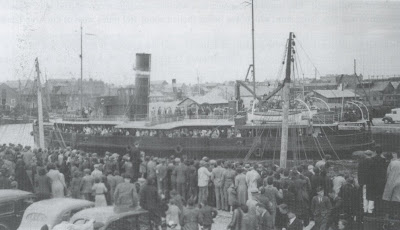 Posted by NUI Galway Archives at 2:44 PM No comments:

Arthur Shields - Actor and Rebel: A life in pictures

This wonderful exhibition of photographs, documents, and publications circulates around the also wonderful figure of Arthur Shields (1896-1970).


Shields was the son of Adolphus Shields, labor organizer, writer for The Freeman’s Journal, and friend of James Connolly and William O’Brien. His mother was of German ancestry, and the parents were by upbringing Protestant—in practice, the family were secular and socialist.


Shields had three wives, two of whom acted for the Abbey Theatre: Basie McGee, who acted under the name 'Joan Sullavan,' and Una 'Aideen' O'Connor. His third wife Laurie Bailey Shields, an American journalist, was instrumental in collecting additional material for the archive after Arthur's death


His daughter by Aideen O’Connor was Christine Shields. Sara Allgood was her godmother. It was Christine who kept this archive, and ultimately, with other members of the Shields family, gave it—free of charge—to the National University of Ireland in Galway.


When one looks at the spectacular pamphlet of photographs of Sackville (O’Connell) Street before and after Easter 1916, it is helpful to know that Arthur Shields, then just 19 years old, fought with the Citizen Army in the General Post Office, and, having taken refuge in Henry Street, was one of the last rebels to surrender. He was interned thereafter at Frongoch camp, Wales. His military service—by other accounts, marked by bravery under fire—was something about which he never bragged, or hardly, spoke.


The brothers Shields were close friends of Sean O’Casey, and took instrumental roles in the first productions of his ‘Dublin trilogy.’ Arthur Shields was through the 1920s and 30s, the Abbey’s chief ‘handsome lead’; his brother Barry Fitzgerald was the company’s most popular comic actor. Arthur Shields frequently directed plays for the Abbey, and more particularly for George Yeats's 'Dublin Drama Leagure'. In the 1930s, when the Abbey undertook a succession of half-year tours of North America, it was Arthur Shields who handled their management on the road.


These tours won the Abbey a fond welcome in towns and cities across the continent. Broadway producers and Hollywood directors also expressed their interest. John Ford, the great Irish American film director, met with the company in Hollywood, and decided to use some members in The Informer(1935) and all the main players in The Plough and the Stars (1936). Thereafter, Barry Fitzgerald remained in the USA as a film star. Arthur Shields was cast in subsequent movies by Ford. He also was invited to direct plays by Paul Vincent Carroll on Broadway in the late 1930s. By the end of the decade, he and his partner Aideen Shields had left the Abbey for the USA.


The Shields brothers played in well over 100 movies before they returned together to make The Quiet Man, directed by Ford, in County Galway in 1951.


After the death in Dublin of Barry Fitzgerald in 1961, Arthur Shields—suffering from emphysema—spent more and more of his last decade with his stamp collection and his library of Irish and world literature. Joyce and Tolstoy were favorites, but his lodestar was Yeats. Precious volumes from that library are also part of the Shields Family Papers.

You can view the online exhibition of 150 images from the Shields Archives here: http://archives.library.nuigalway.ie:8080/digi/exbos/T13

The full catalogue of the Shields archive is available here:
http://archives.library.nuigalway.ie/cgi-bin/FramedList.cgi?T13

Remembering the Eucharistic Congress of 1932

Catholic Eucharistic Congresses are gatherings of ecclesiastics and laymen for the purpose of celebrating the Holy Eucharist. The 31st International Eucharistic Congress was held in Dublin, 21-26 June, 1932. It was the premier international Catholic event. The 1932 Congress was hugely significant in terms of asserting the identity of the Irish Free State as a leading Catholic nation. It was the largest public spectacle in twentieth-century Ireland. There was even an act passed by the Government specifically for the event. It was called the Eucharistic Congress (Miscellaneous Provisions) Act, 1932. It was timed to mark the 1500th anniversary of St. Patrick. 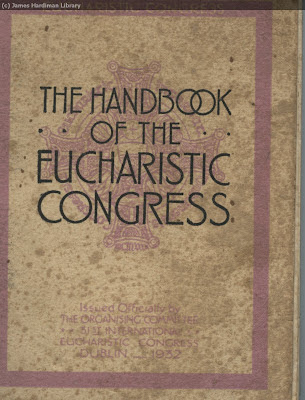 This handbook contained a programme of events throughout the city of Dublin. 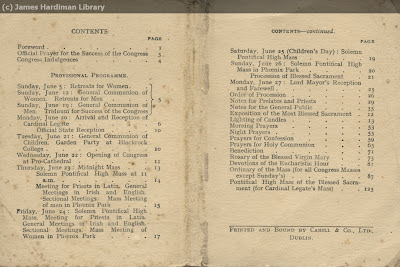 Also among our holdings of Archives and Special Collections here at the James Hardiman Library are photographs taken by an unidentified photographer at the Congress, including scenes from religious events, parades and informal photographs of clerics from around the world in Dublin: 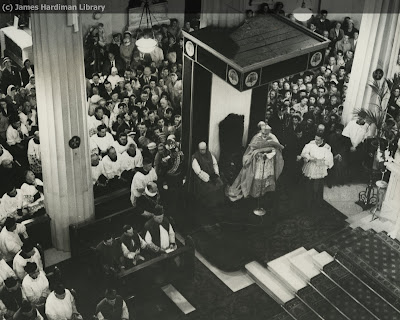 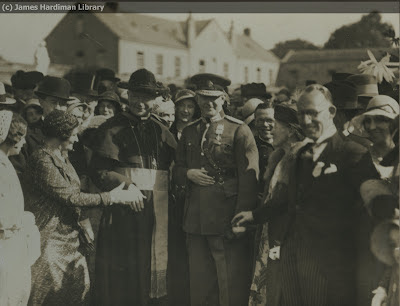 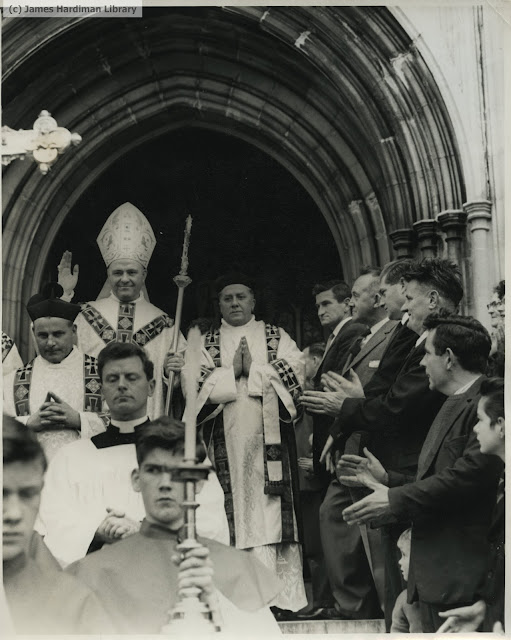 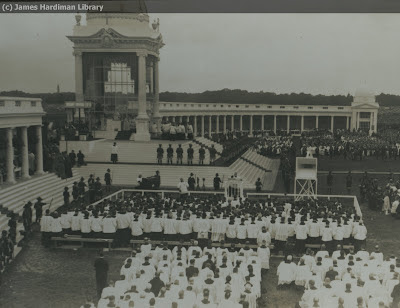 Thomas Kilroy's "The O'Neill" staged this week in 1969 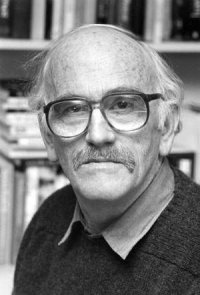 Forty-three years ago this week saw the first production of Tom Kilroy’s play “The O’Neil” on the Peacock Stage of the Abbey Theatre.


“The O'Neill”, Thomas Kilroy's first stage play, was written in 1966. It dramatizes the fate of Hugh O'Neill, Earl of Tyrone (c.1540-1616), whose defeat by the English at the Battle of Kinsale in 1601 led to the final dissolution of the ancient Irish order of government and the Plantation of Ulster. The Thomas Kilroy Archive is one of our featured collections here at the James Hardiman Library. The archive of Thomas Kilroy, held here at the James Hardiman Library, NUI Galway, features numerous drafts and version of the play, a French translation of the play, correspondence between Tom Kilroy and numerous individuals concerning the play including Ernest Blythe, Tomas McAnna, Cyril Cusack, Hilton Edwards and Kilroy’s agent Margaret Ramsay.


“The O’Neill”, Kilroy’s first play and still considered by many to be one of his best and also one of the most important in Irish theatre with its themes of Anglo-Irish relations under the main focus of Kilroy’s attention. 'What call had you coming here thinking to change us? We have our ways, our laws, and our language, the same as the English have, and we're proud of them . . .'
A review of the original production, published in the Irish Independent, 31 May 1969, from Desmond Ryan is included below.
A feature interview with Tom Kilroy marking the occasion of the completing of the cataloguing of his archive is available on the James Hardiman Library website here
The full descriptive list of the Kilroy archive is available here

Posted by NUI Galway Archives at 4:12 PM No comments: