I have discovered some records relating to Muintir na Tíre Limited during the appraisal and arranging of the Muintir na Tíre archive. This includes the minute books from 1931 – 1937 and some published material. 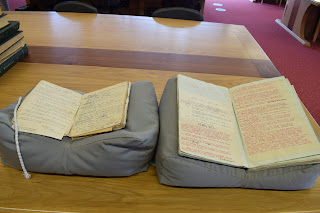 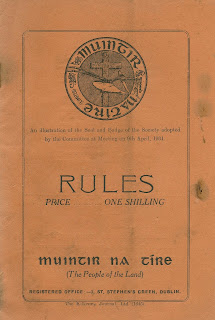 Muintir na Tíre Limited believed in rural self-help. The ideological basis for Muintir na Tíre Limited was the encyclical Rerum Novarum. In this the Pope was calling for greater harmony between the social classes. In Ireland this was seen as the relationship between farmer and labourer. This vision was set out by Reverend Hayes in an address to a meeting of delegates at Commercial Buildings Dublin, 7th May 1931 and published in the below booklet. 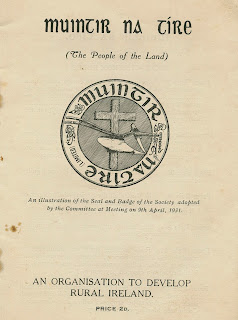 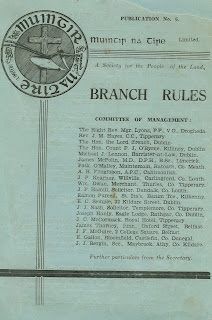 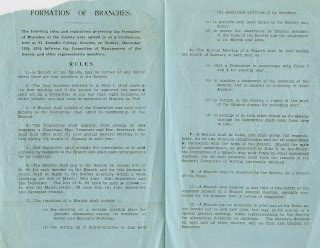 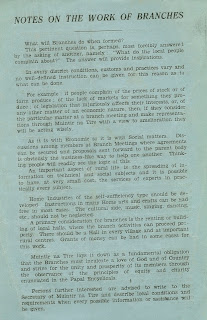 The most successful activity of Muintir na Tíre Limited was the development of Rural Weekends. These weekends were a shortened version of Semaine Sociales held in rural France. Rural weekends developed into the Rural Weeks run by Muintir na Tíre.


Posted by NUI Galway Archives at 11:37 AM No comments:

Martin McGuinness - In Conflict and Peace - From the Archives

The perhaps unknown role that Martin McGuinness played, over many years, in negotiating a peaceful and sustained end to conflict in Northern Ireland can be seen within the archive of mediator Brendan Duddy. Brendan Duddy was born in Derry on 10 June 1936. He became a businessman in his native city, and by the early 1970s he owned and managed two fish-and-chip shops, one in Beechwood Avenue (Creggan) and another in William Street. Duddy knew Martin McGuinness in the 1960s when McGuinness worked for a supplier company delivering burgers to Duddy's shops - at a time when McGuinness's interest in politics was not yet kindled.

At the time it would have been impossible for anyone to predict the central roles both men would play over the course of the following decades.

One section of the Duddy papers pertain to a figure known as ‘Walter'. These items, now digitised and available from the Hardiman Library, reveal the extent of efforts by "Walter"  - the active code-name for Martin McGuinness - and particularly his and Duddy's period of close co-operation in 1993. The files include detailed draft and final correspondence and memoranda sent by Brendan Duddy to McGuinness, which show the level of tense and prolonged discussions regarding the Peace Process of the early 1990s and the later Good Friday Agreement of 1998. The files also include other items such as relevant newspaper cuttings focusing on McGuinness.


Examples include a dossier of three letters from Brendan Duddy to Martin McGuinness, previously sent 21 March - 19 June 1999, copied by telefax to an unidentified recipient in September 1999, detailing the central role and importance played by McGuinness in peace talks. As key mediator in this long process, Duddy, here codenamed as “June”, writes to McGuinness, stating “The War is indeed over and I sincerely hope you can deliver the peace.”. Further letters from Duddy to McGuiness discuss the problematic process of decommissioning of weapons and as recent as June 2006, a letter from Brendan urges McGuinness to “keep driving the Peace Process forward as you have been doing over the last twenty years.” (pol35_585)


The Duddy archive offers an indispensable account of understanding and of previously unknown information about the arduous and lengthy and also at times unsuccessful attempts at stabilising peace in Norther Ireland over nearly forty years. The role of Martin McGuinness in this process can be understood in a broader capacity as this archive is digitally available:

On Tuesday, February 28th 2017 members of the Flynn family visited NUI Galway to view the archive of Flynn and Lehany Coal Mines Limited.  The Flynn family very generously donated the archive to the University. The company was established in 1949. Its archive, one of a very small number on mining in Ireland, is a significant source of information about the mining industry, State energy policy, the operation of the company and the social and economic history of the mines at Arigna.


The Flynn and Lehany company operated the coal mine of Glackaundareagh, Altygowlan, in the central part of the Kilronan mountain in Co. Roscommon from its foundation in 1949, and subsequently at Gubbarudda.The company worked on contracts with hospitals and other public buildings through the 1950s, and it was a supplier to the coal-burning ESB power station atArigna after that station was built in 1958. The power station closed in 1989 and the site is now a quarry operated by Hillstreet Quarries Ltd.

The company operated at a time of great social change in rural Ireland, including rural electrification and themodernisation of Irish industry through the 1960s and 1970s. As the record of a commercial mining company in Ireland in the later twentieth century this collection is unique, and offers unparalleled insights into production processes, as well as financial management and the impact of the industry on the locality. There are only two other collections, both housed at the National Library of Ireland, relating to coal mining in Ireland and each of those relates to the nineteenth century. This archive is also of particular value in its inclusion of the mine owner’s experience.

The archive itself consists of a very fullrecord of the industry, covering the establishment of the company, as well as material relating to production, personnel and distribution. There are reports and correspondence with the various regulatory bodies associated with mineral rights, as well as technical manuals for the machinery used in the plant. There is also material relating to the Hewitson andLawder estates in the Arigna area. It includes details of lands purchased by the Flynn family from the estates under the auspices of the Irish Land Commission, some as early as the 1890s. Other highlights are records of tonnage, giving amounts mined per employee, and a letter from the company and workforce to John Hume making a donation to the Bloody Sunday Appeal Fund.
Fr. Tomás Flynn and Denis Flynn have acted on behalf of the Flynn family in generously donating the archive to NUI Galway. They are first cousins whose fathers, Thomas and Michael Flynn, were involved in establishing the company. Denis Flynn is Managing Director of Hillstreet Quarries Ltd and Fr Tomás Flynn is Parish Priest in Drumcong, Co. Leitrim, and author of a recently published book titled Thomas J. Devine and The Election of the Snows: The North Roscommon By-Election of 1917.

The collection was formally handed over by the Flynn family to NUI Galway at yesterday's event in the University.

Dr. Jim Browne, President of NUI Galway, commented: “NUI Galway values its archival collections as a major resource for the scholars of today and tomorrow. The donation of the Flynn and Lehany coal mining archive represents a very significant addition to our collections, and the University is much indebted to the Flynn family”.

Fr Tomás Flynn observed: “Our family is delighted that NUI Galway will be the home of the Flynn and Lehany Archive and that this collection will be used for educational purposes.”

John Cox, University Librarian at NUI Galway, noted that “The Flynn and Lehany archive adds to the regional coverage of our collections and is of great value given the enduring interest in the Arigna mines. It sits well with the John McGahern archive in particular.”

This wonderful archive has been listed and is available to view in the Archives and Special Collections Room, Hardiman Research Building, NUIG.
Posted by NUI Galway Archives at 12:09 PM No comments: