Druid's 'Beauty Queen' - from the Archive

The Beauty Queen of Leenane by Martin McDonagh was a point of departure for many reasons. When it opened to a world premiere production by Galway's Druid Theatre Company, in a co-production with London's Royal Court Theatre, on the first of February 1996, it also marked the opening of a new theatre building – Galway's Town Hall Theatre. The play would also be a whirlwind success for Druid and open up one of the most important and celebrated relationship's in contemporary Irish drama – that of director Garry Hynes and the plays of Martin McDonagh. it also, of course, exposed audiences both in Ireland and around the world, to a very different 'Irish' play.

Within two years of the play's opening in Galway, Beauty Queen would make history and secure four Tony awards, including Best Director for Garry Hynes, the first female director to win the award.
The play would tour extensively in Ireland, the U.K. and wider internationally, from Broadway to Sydney, over successive years, tours, cast changes and revivals between 1996 and 2000. A constant being that the message of the play remained the same – that Ireland and indeed Irish drama (and their numerous definitions) were being redefined through Beauty Queen and through the subsequent Leenane Trilogy which would premiere again in Galway in 1997. 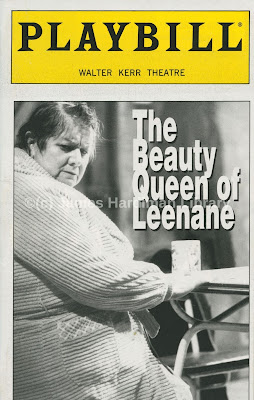 The long suffering daughter, Maureen Folan, questions her controlling and ageing mother, Mag, in the opening scene, "What country do you live in?" Mag responds: "Galway". The short exchange would sum-up neatly the questioning of region and nation, tradition and modernity, home and place that the play examines in wickedly black humour and violence and which has captivated audiences around the world for two decades. As Fintan O'Toole wrote in an article for the programme of the world premiere of the play in 1996, entitled "Changing Places":

"That unbounded Ireland is the one which Martin McDonagh belongs to, and the one in which Druid has always been willing to play itself. It is a nation that cannot be taken as read but must continually be written up, and acted out"


This year, 2016, Beauty Queen turns twenty years of age. It is currently undergoing a major revival, opening, as it first did back in 1996, at Galway's Town Hall Theatre, before embarking on a major Irish and international tour. Marie Mullen, co-founder of Druid Theatre Company, returns to the play and takes up the role of Mag, first portrayed by the late Anna Manahan. The archive of Druid Theatre Company, held at the Hardiman Library, NUI Galway, offers a fascinating insight into the play and its production and reception. Among a wide range of records include programmes, press files, flyers and posters from all productions in Ireland, the U.K., America and Australia. there are also files of photographs of productions and rehearsals; the prompt-script from the 1996 production as well as a first-edition published edition of the script and also a later edition which is signed by all cast members. Technical details such as design plans, sound and lighting plans, reveal how the play was a complex and challenging work to stage, as it presented and constructed a rain-sodden and wild west of Ireland setting. (Mag: "Wet Maureen?" Maureen: "Of course wet".) The archive of this play and of Druid itself is a unique resource to understand anew this play as we revisit McDonagh's Leenane, twenty years after we first did so. 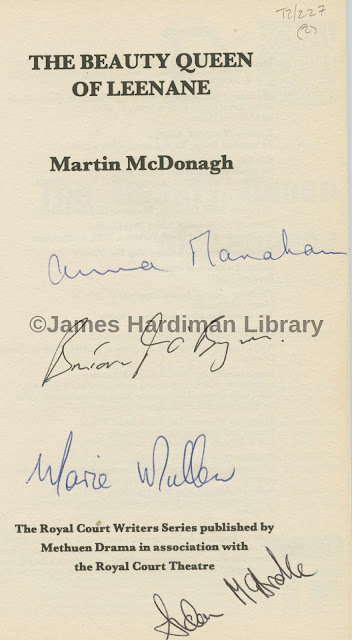 Posted by NUI Galway Archives at 7:31 PM No comments: 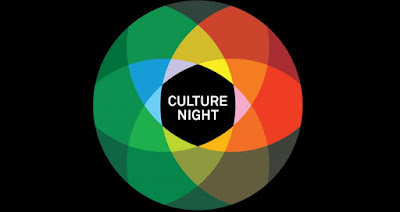 This Friday, 16th September, sees another packed Culture Night across the country and across Galway city and county. The Archives of the Hardiman Library and NUI Galway bring you two events to keep you topped up with culture on this busy evening. First is a lunchtime event of music, song, spoken word and archives. Celebrating the heritage and culture of the West of Ireland, this event promises to be a special lunchtime gathering of a range of artists .The Galway Music Residency and NUI Galway invite you to join the Galway ConTempo Quartet in the President’s Drawing Room, NUI Galway, where you can view the historic art collection on display; a rare work by Lady Gregory’s son Robert, a portrait of actress Siobhan McKenna and more, with talks, readings and rare archival film, photographs and props from McKenna’s acting legacy and from the archives of Galway's celebrated company, Druid Theatre.


At 6pm, join us for a special evening of encountering the University archives, stories and history during the turbulent period of 1913-1919. Staff and students of the University had prominent roles on and off the battlefields both in Europe and in Ireland during these formative years. Explore guided tours of our exhibition and behind the scenes look at the original University archives from the collections of the Hardiman Library. (tours begin at 6pm and 7pm and are c. 50 mins) 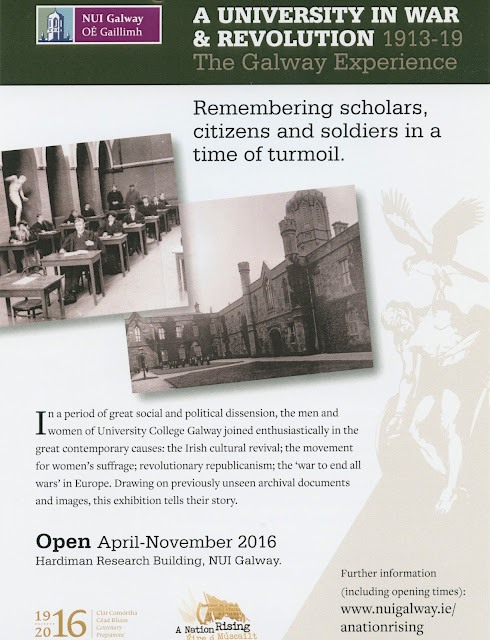 Posted by NUI Galway Archives at 2:58 PM No comments:

The Library at National University of Ireland, Galway, will host a seminar on Tuesday 4 October which will tell the story of the Abbey Theatre Digital Archive, created by the largest theatre archive digitisation project undertaken worldwide.

Registration is free, with full programme details at https://www.eventbrite.ie/e/digitising-the-abbey-theatre-archive-journey-and-destination-tickets-27430060048

Posted by NUI Galway Archives at 12:42 PM No comments: