It is timely that in the week which saw the writer Salman Rushdie publish his long awaited memoirs, that I should come across the following press cutting as part of box-listing a collection. The cutting details a visit made by Rushdie to Dublin in 1993. This visit took place, of course, during the very height of the controversy and consequent 'Fatwa' out on the life of Rushdie owing to the publication of his novel the Satanic Versus, on January 15th 1993, with the press cuttings, taken from the Irish Press, dated the following day. 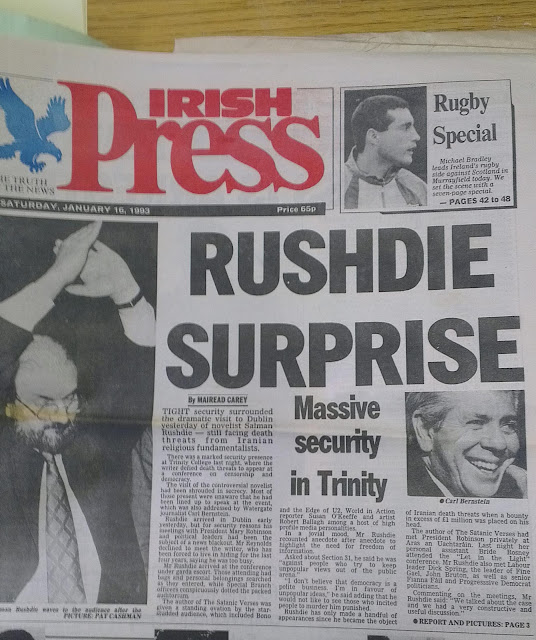 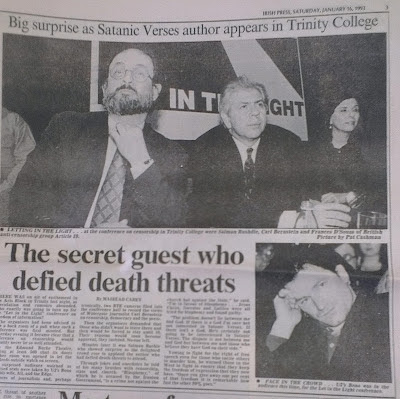 The Article reads: "There was a marked security presence at Trinity College last night where the writer defied death threats to appear at a conference on censorship and democracy." Rushdie met in private with President Mary McAleese and other leading Government and political figures earlier in the day though then Taoiseach Albert Reynolds "declined to meet the writer" and these meetings had been subject to a "news blackout".


Rushdie's recently published memoir is entitled Joseph Anton - both names coming from the forenames of Conrad and Chekhov and was also the cover-name that Rushdie operated under when under fear of threat to his life.


The eagle-eyed among you may spot a familiar face at the talk by Rushdie on the second page of coverage, none other than Bono!
Posted by NUI Galway Archives at 11:16 AM No comments:

To get you all in a suitably festive mood ahead of the Culture night events happening this Friday 21 September, here is a video interview with playwright Thomas Kilroy conducted by Prof. Adrian Frazier, College of Arts, Social Sciences, and Celtic Studies, NUI Galway, to mark the cataloguing of the Kilroy Archive in 2011. It is a wonderful interview and offers great insights in Kilroy the man as well as Kilroy the Playwright. At 6pm, this Friday Culture Night, there will be a talk exploring the archive of Thomas Kilroy which is proudly held by the James Hardiman Library.


All our events are being staged at the Huston School of Film and Digital Media and run throughout the evening. For more details and for booking enquiries ring 091 493353 or email barry.houlihan@nuigalway

The video can be seen in full at this link: http://vimeo.com/celt/thomaskilroy


Culture Night 2012 at the James Hardiman Library - What will you see?

Posted by NUI Galway Archives at 10:42 AM No comments:

Huston, Sartre and the Freud Scenario


Huston, Sartre and the Freud Scenario : The story behind an item from the NUI Galway archives' Huston Family Collection.

Nearly all of John Huston's 37 feature films are literary adaptations however perhaps one of the most interesting items in NUI Galway's Huston Family archive is an original screen play for Huston's 1962 release Freud: the Secret Passion.  The original screenplay was written by renowned French philosopher and writer Jean-Paul Sartre.  Sartre's manuscript in NUI Galway's archive which includes 'corrections' by John Huston runs to over 700 pages, however Sartre refused to have his name associated with the film when it was released following a dispute with Huston over the script.

Huston had first encountered Sartre in Paris in 1952 during the filming of Moulin Rouge and considered him to be an ideal person to script a film about the life and work of Sigmund Freud because he 'knew Freud's works intimately and would have an objective and logical approach.'  Ironically both Sartre and Huston considered themselves anti-Freud for largely the same reason: Sartre because as a Communist he believed the role of the psychoanalyst was limited and of little social importance.  For his part Huston felt that psychoanalysis was an indulgence for bored house wives and the problem children of the rich while the 'movers and shakes' were too busy for it and those that most needed it couldn't afford it.

Sartre possibly motivated by the need for cash to sort out his tax affairs agreed a fee of $25,000 to write the  script of Freud and delivered a 300 page first draft in French in late 1959.  Huston calculated that if a film was produced from the 300 page script it would be over 5 hours long.  The storyline centred on the development of Freud's theory of the Oedipus Complex, exploring each 'wrong alley' Freud went down while developing the theory. While Huston agreed with the general approach he felt that there was too much material for a single film.  After corresponding with Sartre for several weeks Huston invited him to St. Clerin's , his home in Galway, for two weeks  in January 1960.

Sartre's visit consisted of daily meetings aimed at reducing the length of the script.  The two men's recollections of the visit differ considerably.  Huston describes Sartre as a man who talked incessantly taking notes of his own words.  As Huston remember it "You'd wait for him to catch his breath, but he wouldn't.  The words came out in an absolute torrent. You might be able to catch him off guard and get in a point, but if he answered you at all -which was seldom- he would resume his monologue." On one occasion Huston left the room during one of Sartre's monologues, returning some time later to find him still talking.  A woman who Huston describes as Sartre's 'secretary – a multilingual Arab girl' (in fact Arlette Elkaim-Sartre an Algerian adopted by Sartre , who later edited many of his works) would type up Sartre's notes in English and circulate them.   According to Huston Sartre was 'as ugly as a human being can be' always dressed in a grey suit, black shoes, white shirt, tie and vest.  These clothes which he wore from when he came down for breakfast in the morning until last thing a night were always impeccably clean.   Huston wondered if perhaps Sartre had several identical grey suits and white shirts.  One morning Sartre appeared with a swollen check resulting from a bad tooth.  Huston offered to take him to his dentist in Dublin.  Sartre insisted on going to a local dentist in Galway.  He was out in a few minutes having had the tooth pulled.  According to Huston "the physical world [Sartre] left to others; his was of the mind.  He was by the way, very heavy into the pills.  I think he had to be to keep going at his pace.'
Huston screened Let There Be Light his 1945 documentary about U.S. soldiers suffering from psychiatric problems following combat in World War II.  Sartre was fascinated by the scenes in the film which depicted hypnosis and Huston who had learnt the technique during the process of making the documentary offered to demonstrate on Arlette, 'an easy subject' who was hypnotised by Huston without difficulty.  When Sartre then put himself forward for hypnosis Huston found him 'hypnotically impregnable ...occasionally you encounter someone like that '.

Sartre's memories of the two weeks of script meeting were somewhat different.  In his letters home to his wife Simone de Beauvoir in Paris he describes the Galway countryside: "Everywhere you go, ruins, which range with no warning from the 6th century to the 20th . . . Only the presence of grass proves that an atom bomb wasn't dropped there . . . one step away from lunar, precisely the interior landscape of my boss, the great Huston. "  While Huston wondered about Sartre's monologues and grey suit (or suits) Sartre wrote of Huston  "...in moments of childish vanity, when he puts on a red dinner jacket or rides a horse (not very well) or counts his paintings or tells workmen what to do. Impossible to hold his attention five minutes: he can no longer work, he runs away from thinking."  According to Sartre's account of the incident when Huston suddenly walked out of a meeting leaving Sartre with Arlette and another house guest,  Sartre noticed Huston's departure but kept talking to avoid an embarrassing silence.

Sartre and Huston did manage to discuss a few cuts in the script, Sartre returned to Paris to make them.  Huston wasn't surprised when the revised script which arrived by post was even longer than the first draft.  Huston was now presented with two problems with the script: it was way too long and Universal studios who were funding the project would only make the film is it could get past the censors (which would necessitate additional changes).   Huston first enlisted a professional screen writer Charlie Kaufman to help him amend the script, however  Huston found Kaufman was intent on following the pattern of most 'biopics' of time. 'The protagonist is invariably a hero, and loveable to the point of banality.  This was the very opposite of the sheet lightning and sulphur I had in mind.'  Huston was eventually able to produce a workable script from Sartre's draft with the help of the German producer and screenwriter Wolfgang Reinhardt.

Huston sent Sartre the final 190 page script for comment.  When Satre read it he sent word back that he no longer want to be associated with the project.  When pressed for a reason Sartre replied with a letter full of recriminations.   He questioned Huston's understanding of Freud saying that he should have listened more to Reinhardt who Sartre felt knew more about Freud than either of them.    Production and release of the film went ahead without Sartre getting any screenwriting credit (in accordance with his own wishes).   The film was released in 1962 following a more difficulties between Huston and the film's star Montgomery Clift who as well as suffering from an alcohol problem had his own opinions about Freud having himself spent many years in analysis.  Sartre's original script was eventually published posthumously in 1984 as Le Scénario Freud  in French and The Freud Scenario in English translation.

The manuscript of Jean Paul-Sartre's original script for Freud is available for consultation in the James Hardiman Library NUI.

Scence from John Huston's Freud: the Secret Passion.  Freud has more success with hypnosis than Huston did with Sartre.