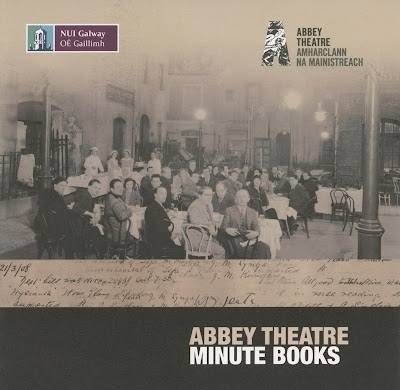 As part of the Yeats2015 celebrations, the online digital archive of Abbey Theatre Minute Books will be made available to the public for the first time. Collectively, the minute books amount to nearly 1,000 pages, covering some of the Abbey’s most significant events from the period 1904-1939, being the period that spans Yeats' lifetime.

'A Digital Journey Through Irish Theatre History', the Abbey Theatre - NUI Galway Digital Archive Partnership is the largest digital theatre project ever undertaken, and heralds a new era in Irish theatre scholarship, both nationally and internationally. Previously unseen, the Abbey Theatre Minute Books include the period in history when both Lady Gregory and W.B. Yeats were involved in the management of the Abbey Theatre.

The Abbey Theatre minute books contain notes from meetings of the theatre’s Board of Directors. They offer a fascinating glimpse behind the scenes of the theatre, showing how the Abbey’s managers dealt with a variety of issues, from choosing plays to determining how much to pay their actors.Along the way, we find important information about leading figures from the Irish Literary Revival and beyond: not just W. B. Yeats, Lady Gregory and John Millington Synge but Sean O’Casey, Lennox Robinson, Teresa Deevy, Sean O’Faolain, Frank O’Connor, and many others. We also learn about great Irish actors such as Molly Allgood, Ria Mooney, Barry Fitzgerald, Cyril Cusack and many more.

NUI Galway Professor of Drama Patrick Lonergan said that the minute book will be of huge interest to theatre scholars, historians, and anyone with an interest in Irish culture: “the story of the Abbey Theatre is in many ways the story of our nation in microcosm. This online resource shows the Abbey Theatre and NUI Galway working together to reveal new aspects of that theatre’s story – and, by extension, new aspects of the story of Ireland. Users of the site will be able to search easily through hundreds of pages of records, and can move between the handwritten originals and carefully transcribed webpages. And all of this is available entirely free of charge to readers anywhere in the world.”

The minute books allow us to understand better how theatres are run. Yeats wrote about his approach to theatre business in a poem that was tellingly called “The Fascination of What’s Difficult”, cursing “plays/ that have to be set up in fifty ways”. Here we find Yeats encountering all sorts of difficulties - from the threat of government censorship of Sean O’Casey’s The Plough and the Stars in 1926 to the leaking of his late play Purgatory to a Jesuit priest in 1938. And those difficulties are indeed fascinating.

Dr Charlotte McIvor, lecturer in drama and performance at NUIG, said that the books contain valuable information for scholars and teachers. She said: “I think they are going to be very important in explaining to students the different kinds of labour involved in running a theatre.”Dr McIvor said the books document “in minute detail” the decisions of the board right down to discussions about whether or not to allow cigarette smoking in the theatre. “I think you could honestly take any two pages in these books and build a successful lesson around it,” she added.

Playwright and Abbey board member Thomas Kilroy said the books help illuminate the relationship between the early theatre and the changing Irish State.He said: “One extraordinary thing which I had never heard of before which was that in 1939 Dublin Corporation tried to establish stage censorship. They assembled a number of inspectors to establish what was going on in Irish theatres.”

We also learn much about the day to day activities of keeping a theatre in business: the struggles to find appropriate funding, the actors’ requests for extra money or time off, and the maintenance of the building. And of course we learn much about Ireland, both before and after independence. The Abbey Theatre famously was the first state-subsidised theatre in the English-speaking world, earning funding in 1925 from the newly independent Irish Free State.

Bryan McMahon, Chairman of the Abbey Theatre said:  “The Abbey Theatre is proud to reveal, for the first time, our early Minute Books, an exciting milestone in our ground-breaking digital archive partnership with NUI Galway.   It is wonderful to manifest digitally the inner workings of the national theatre during its formative years.  These Minute Books give us fascinating insights into the management style and business acumen of W.B. Yeats and Lady Gregory and the contribution made by the Board of Directors.  Indeed, the Minute Books reveal that Yeats was so integral to the Abbey Theatre, that Lennox Robinson, playwright and Board member, was dispatched to France to assist in the repatriation of his remains.  As we all know, it was an unsuccessful mission.  The Abbey Theatre is delighted that in this Yeats’ commemorative year, the full story of W.B. Yeats as theatre maker can be fully revealed.”

The Abbey Theatre Minute Books can be viewed www.nuigalway.ie/abbeytheatreminutebooks/

Posted by NUI Galway Archives at 12:29 PM No comments:

We recently introduced a new web interface through which you can browse the archives collections of the James Hardiman Library online.

Here are 5 ways in which your research could be transformed by this exciting new development!

1. Archives are amazing sources of inspiration. They hold an abundance of potential research material that can be applied to virtually any discipline to create innovative research. The catalogue could hold the key to unlocking your next research project, and you will never know unless you look!

2. Even if you don't unlock your next research project, simply by browsing through the Showcase and Image Gallery sections of the page, you are certain to find out about something or someone new.

3. The enhanced search functionality afforded by this new service means you can carry out keyword searches across the entire catalogue. This means you can browse over 20,000 records from 350 collections simultaneously, bringing insights from other sources to light that you may not have considered before now.

4. The archives catalogue is one part of a new suite of tools aimed at opening up our archives. Why not look at the catalogue alongside some of our digital projects which are available on https://digital.library.nuigalway.ie/. Keep an eye out for new projects on this page, and you can still find our older digital projects on http://www.library.nuigalway.ie/digitisedarchives/. These will be migrated to the new system soon.

5. Finding something you are interested in on our catalogue gives you the perfect excuse to work in our beautiful reading room, located on the ground floor of the Hardiman Research Building in the heart of NUI Galway's campus.

Check it out now on http://archivesearch.library.nuigalway.ie/. Happy Browsing! 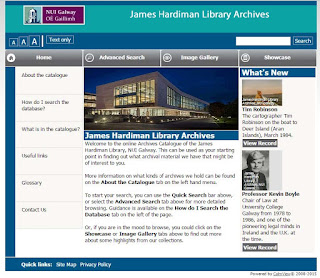 Posted by NUI Galway Archives at 12:43 PM No comments: