Looking Back: Much Ado for Druid and Hawk's Well in 1982

This year marks the thirtieth birthday of the Hawk’s Well Theatre in Sligo. As well as being a home to theatre for the people and communities of Sligo, Hawk’s Well has supported and developed some of the most successful of Irish theatre productions and companies for the past three decades.

Kicking it all off back in 1982 was a production by Druid Theatre of William Shakespeare’s Much Ado About Nothing. It is fitting that this past month Druid once again took to the stage of Hawk’s Well with their currently touring production of John B. Keane’s Big Maggie.


On 12th January 1982 the Druid production of Much Ado About Nothing featured the talents of Marie Mullen, Ray McBride, Sean McGinley, Rebecca Bartlett and many others. The production was directed by Gary Hynes. The Druid Theatre archive, which is proudly held here in the Archives service of the James Hardiman Library of NUI Galway, includes many records from this opening night in Sligo. Here you can view the original programme, cast list and some fantastic images from that original production at Hawk’s Well in 1982.
Posted by NUI Galway Archives at 12:12 PM No comments:

A recent initiative here at the James Hardiman Library saw the contribution and sharing of some of our digital projects with the Europeana.eu website. Europeana.eu is a portal site where cultural institutions from across Europe can upload, link and share their digital projects that range across books, paintings, film, music, archives, manuscripts and museum objects. As recent as early January 2012, the twenty millionth digital item was uploaded onto Europeana.eu. Now, on Eurepeana.eu, the Balfour Album, a truly unique collection of photographs depicting scenes and life in the west of Ireland in the late nineteenth century, is fully digitised and available.
At the James Hardiman Library, our Institutional Repository and Digitisation Librarian, Fergus Fahey digitised the Balfour Album in 2011. The incredible collection of photographs that make up the Balfour Album was created between 1893 – 1895 by the Belfast photographer, Robert John Welch. It was a gift to the former Chief Secretary for Ireland, Arthur J. Balfour in recognition of his support for the building of the Galway-Clifden Railway. The album was presented to Arthur Balfour in the summer of 1896, a year after the railway had opened. It remained in the property of the Balfour family until 1987 when it was acquired by the James Hardiman Library.
The James Hardiman Library worked closely with the Irish Manuscripts Commission (IMC) on this project. The IMC acts as a national aggregator for digital content coming from Irish cultural institutions for inclusion in Europeana. Now, for the first time, the unique collections and archives of the James Hardiman Library are shared to a truly global audience on Europeana.eu. You can view the items here
The Balfour album is also available as an online exhibition featuring an extensive history and background on the album and scenes they depict hosted by the James Hardiman Library here
Posted by NUI Galway Archives at 11:20 AM No comments: 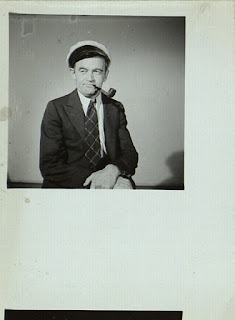 Last Saturday marked the 50th anniversary of the death of Barry Fitzgerald, the well-known actor. Born William Joseph Shields in 1888, he followed his brother Arthur into the Abbey Theatre in 1915, taking the stage name Barry Fitzgerald so as not to draw the attention of his employers (the Department of Industry and Commerce).  Although he did not become a full-time actor until 1929, he played a number of notable roles, including Fluther Good in the premiere of The Plough and the Stars. One of Sean O’Casey’s favourite actors at the time. In 1932 he toured America with the Abbey, and returned in 1936 when the director John Ford cast him in his film version of The Plough and the Stars. Numerous roles followed, including parts in Howard Hawks's Bringing up Baby (1938), and in four more Ford movies, including playing a Welshman in How Green was my Valley (1941). His defining role, however, came in 1944 when he starred as Fr Fitzgibbon alongside Bing Crosby in Going My Way (1944), winning an Oscar as Best Supporting Actor for the role. He is probably best remembered now for his role as the match-maker Michaeleen Og in The Quiet Man (1951), a film which also featured Arthur Shields. 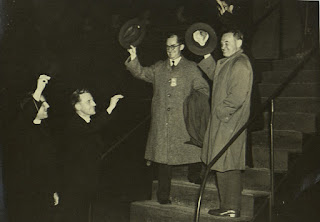 Information on Barry’s acting career and family can be found in the Shields Family Papers held here at the James Hardiman Library. The full descriptive list of the collection is available at http://archives.library.nuigalway.ie/cgi-bin/FramedList.cgi?T13 and some of the items from the collection are available from our digitized collections http://archives.library.nuigalway.ie:8080/digi/exbos/T13/SlideShow The collection includes many photographs of Barry, as well as correspondence by and about him. In a poignant letter to a fan written shortly after Fitzgerald's death in January 1961 Arthur Shields wrote of his brother 'Barry was a very shy little man and he was uncomfortable in crowds and really dreaded meeting new people, but he was not a recluse and did enjoy certain company, especially when the 'old chat' was good.' (see T13/311). 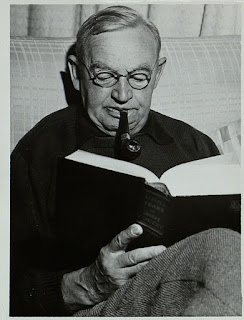 Posted by NUI Galway Archives at 12:56 PM No comments:

Today marked the anniversary of the death of James Joyce in 1941. A sense of the pressures faced by Nora Barnacle in the immediate aftermath of his death can be seen in the two letters below, which come from one of our collections, Papers relating to the Will of Annie Barnacle (P11). This collection consists of the legal papers relating to the application for an Order of Probate on the Will of Annie Barnacle, 4 Bowling Green, Galway, mother of Nora Barnacle. She died on 9th November 1940, and had made her will in 1936. Complications arose when the original of the will was misplaced, and the letters from Nora barnacle and Miss Weaver to Kathleen Griffin reflect this search. The terse response from Nora Barnacle to her sister [P11/2] reflects the dire straits she was in at the time as a result of James Joyce's death and the fact that she could not contact her daughter Lucia in France. Miss Weaver's letter also reflects how the war impinged on their lives with the news of the arrest of Paul Leon [P11/1]. They have no knowledge of the whereabouts of the original of the will.The rest of the material relates primarily to the work of McDermott and Allen, solicitors for Kathleen Griffin, and their motion for an Order of Probate on the Will of Annie Barnacle. This includes dealing with the legal, medical and funeral costs, as well as the execution of the terms of the will. The material reflects the painfully slow legal process surrounding the case.


The first letter, dated 13 March 1942 is from from Harriet Weaver, 4 Rawlinson Road, Oxford, to Mrs Griffin stating that she had written to Mrs Joyce to see if she had the will. "If the original Will is in Paris it will, I imagine, be quite impossible to obtain it from there. Mr Joyce's secretary-friend in Paris, Mr Paul Léon, a lawyer, has been arrested and interred as a hostage, so Georgio wrote - a terrible fate". She says that Nora is "suffering from bad rheumatism and very lonely", and hopes that the matter of the Will is sorted soon. Note at end stating that this letter was presented as evidence in an affidavit of Mrs Griffin before Tomás Mac Enrí, Commissioner for oaths, on 23rd Jan 1943. 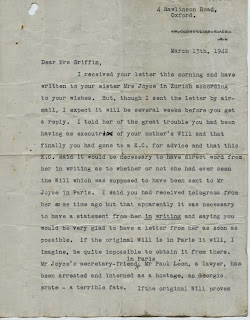 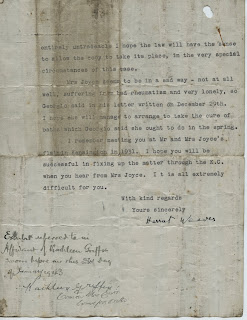 The second letter, dated 8th April 1942 is from Nora Barnacle, Carlion Elite Hotel, Zürich, to Kathleen Griffin, 4 Bowling Green, Galway, saying that Miss Weaver had written to her about her mother's will, and repeats that she doesn't have it. "If at any time a copy of Mothers will was sent to Jim I know absolutely nothing about it" and suggests the lawyer should have a copy. "I may remind you that I have plenty of worries myself Jim's death has been a terrible shock to me Lucia is France and I have no news of her..." Envelope has been opened by the censor. 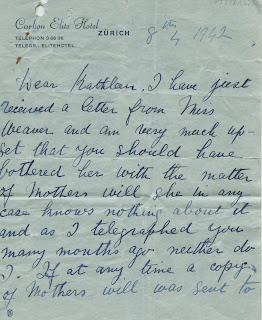 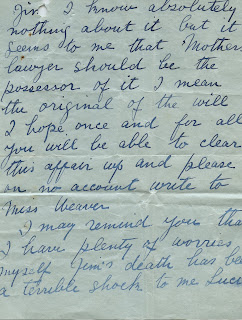 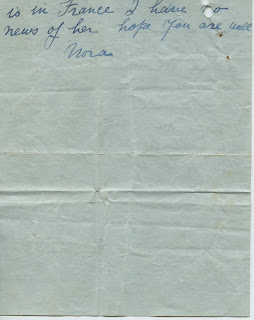 The Descriptive List for the entire collection is available at http://archives.library.nuigalway.ie/cgi-bin/tabbedlist.cgi?P11 and the collection is also the subject of an entry in the Irish Archives Resource at http://www.iar.ie/ArchiveDetails.shtml?6750814;6750983;6750983 .
Posted by NUI Galway Archives at 10:36 AM No comments: