Remembering the Rising - Commemorations from 1966

President of Ireland, Michael D. Higgins, led the commemoration and national remembering of the events of Easter 1916 this past weekend, the centenary of the Easter rising of 1916. As part of a national programme of events, commemorations included a military parade past the G.P.O. on Dublin's O'Connell Street on Easter Sunday to a nation-wide synchronised sequence of events that took place in Galway, Cork, Meath and Wexford on Easter Monday,

Across the weekend a diverse programme of cultural commemoration in the form of lectures, talks, concerts, exhibitions and re-enactments entertained and engaged the public. At the beginning of all these events was a laying of a wreath at the Garden of Remembrance at Parnell Square by President Higgins.

The Garden of Remembrance was officially opened by then President of Ireland, Éamon De Valera, as part of the fiftieth anniversary commemorations of the 1916 Rising in 1966. As the events of 1916 are of such interest to study and understand, so too are the acts of commemoration and understanding how we remember these moments in Irish history at various times in the State's history. Within the archive of actor and revolutionary Arthur Shields at the Hardiman Library, NUI Galway, are original plans for the Garden of Remembrance. Arthur was an actor and stage manager at the Abbey Theatre and who was an active combatant in the Rising as it broke out just streets away from the Abbey Theatre. He was later arrested and interned at Frongoch Prison Camp in Wales.

In a further link between history and remembering, Shields has the unique distinction of being a rebel active in 1916, of playing the lead role of Jack Clitheroe in the 1926 original production of Sean O'Casey's "The Plough and the Stars" critiquing the Rising at the Abbey Theatre and also playing the role of Padraic Pearse in the 1936 film version of "The Plough and the Stars" directed by John Ford with a screenplay by Dudley Nicholas. The below images are all from the archive of Arthur Shields and offer a glimpse into commemorations of 1916 fifty years ago.

Posted by NUI Galway Archives at 1:12 PM No comments:

The Ossian Online project recently donated three Macpherson editions to the Special Collections section of the James Hardiman Library at NUI Galway. The donation includes copies of the first and second editions of Fingal (both dated 1762) and a copy of Temora (1763), and represents the beginning of an initiative to acquire copies of the seven editions that were published under James Macpherson’s authority in the period 1760-73. This will provide a printed analogue of the editions that comprise the focus of Ossian Online and create a new collection unique in the libraries of Ireland. 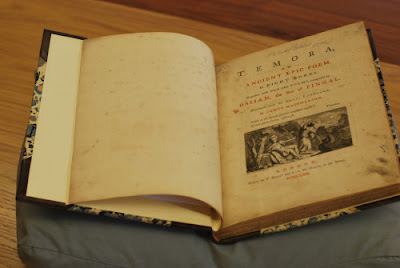 The edition of Temora donated to the James Hardiman library.

While part of the motivation for Ossian Online is to make facsimiles and accurate transcriptions of the full Ossian corpus available on the web, the project recognises that this is a representation of—not a substitute for—the original print editions. Just as the digital medium enables new orientations towards literary texts—such as the platforms for visualising genetic textual development and collaborative annotation being developed by Ossian Online—the printed book offers opportunities for scholarship that are unique to that medium. Individual copies bear marks of ownership and use—bookplates, signatures, marginalia—that allow scholars to investigate the social history and provenance of the work.
During the era of handpress printing, variations between individual copies within a single edition were common, and surveying multiple printed editions can unearth this evidence—and reveal the circumstances behind such phenomena—in a way that a representative digital facsimile cannot. Forthcoming posts on this blog will examine some bibliographical problems that arise from examining multiple printed copies of Ossian. 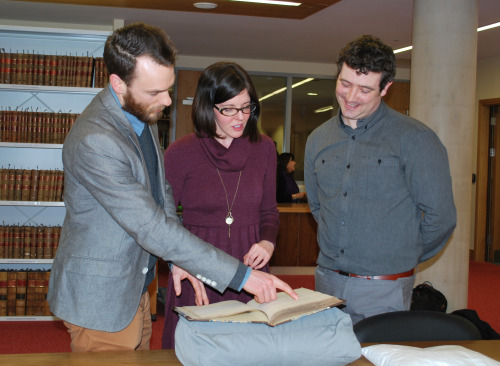 
Thus, we are delighted to see NUI Galway take the first steps towards acquiring a printed collection to complement the work of Ossian Online. These editions were acquired with the assistance of funding from the School of Humanities at NUI Galway and the Irish Research Council, and the project would like to acknowledge their generosity in helping to establish this important initiative. Thanks also to John Cox, Librarian, and Marie Boran, Special Collections Librarian at the James Hardiman Library for their support in this endeavour.
Posted by NUI Galway Archives at 12:47 PM No comments:


NUI Galway will host the 2016 Monsignor Pádraig De Brún Lecture entitled Fairies, Rebels, Mothers: Lady Gregory and 1916, to be given by Professor Lucy McDiarmid, Marie Frazee-Baldassarre Professor of English at Montclair State University in the US on Tuesday, 22 March.

The biennial public lecture is held in honour of Monsignor de Brún who served as University President from 1945 until 1959. The memorial lectures have been running since the 1960’s with Professor Stephen Hawking giving a lecture in 1994 on “Life in the Universe”. Professor McDiarmid’s lecture will focus on the career of Lady Gregory, whose writings and life are so closely connected with County Galway.

Professor Lucy McDiarmid is the author and editor of seven books, including At Home in the Revolution: what women said and did in 1916 and The Irish Art of Controversy. Her work on the cultural history of Irish modernism, published in her numerous books, essays and edited volumes, has led to a deeper understanding of one of Ireland's greatest literary periods.

The public lecture will be followed by a questions and answers session moderated by Professor Daniel Carey, Director of the Moore Institute at NUI Galway.

The Monsignor De Brún Lecture will take place on Tuesday, 22 March at 7.30pm in the Aula Maxima (Lower).

To book a place at this free public lecture, please register at www.conference.ie. Advance booking is essential. 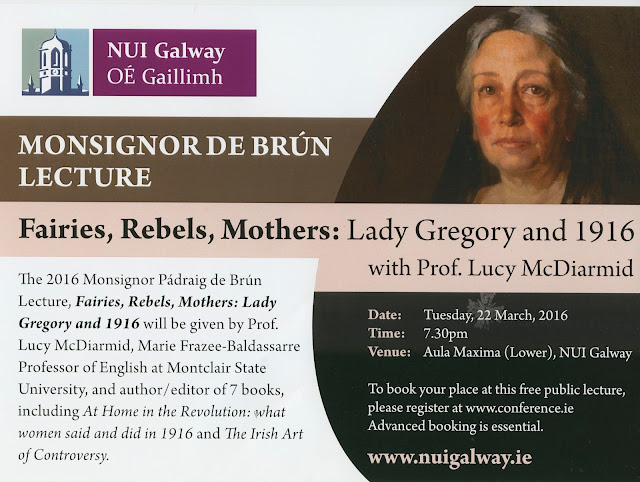 Posted by NUI Galway Archives at 11:29 AM No comments:

Can you give more information on this photograph from Gort? 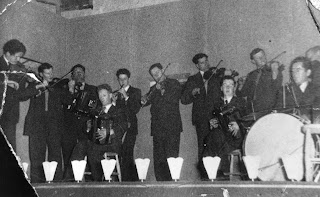 We are looking for your help with this photograph. It is taken at a concert finale at Gort. It features, left to right standing, Joe O'Leary, Mylo Mullins, Paddy Donoghue, Kieran Collins, Paddy Burke, Micko Carr, PJ Hayes, Jack Shaughnessy. Sitting, Kit O'Connor, Joe Burke and [     ] Moloney. We have it dated to 1955-1956, but if anyone can help us with the exact location, date and event we will add that to the catalogue description.

For more on the Joe Burke collection, which features correspondence from the Leitrim Ceili Band, photographs and music from a wide range of traditional musicians, visit http://archives.library.nuigalway.ie/joeburke/ .
Posted by NUI Galway Archives at 10:09 AM No comments: 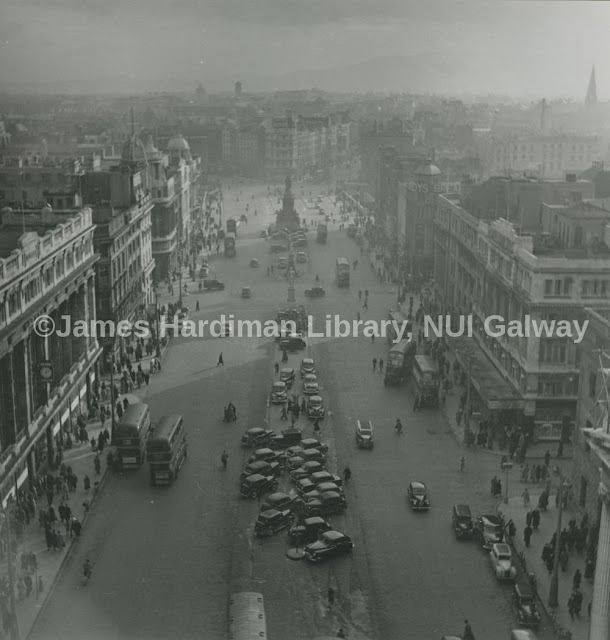 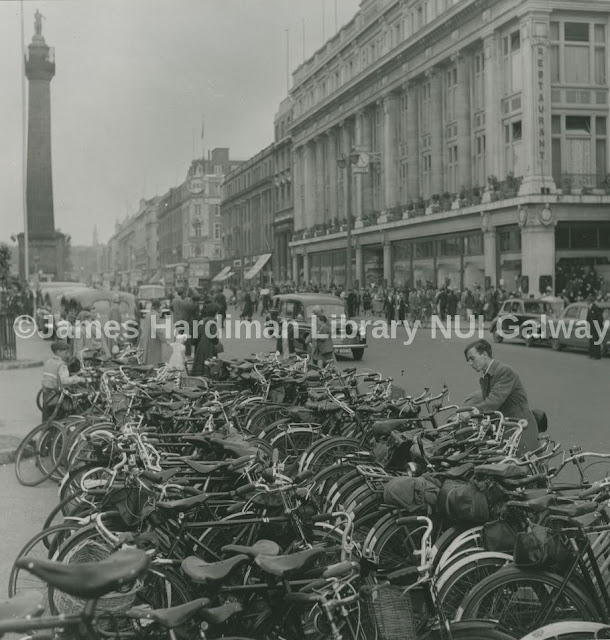 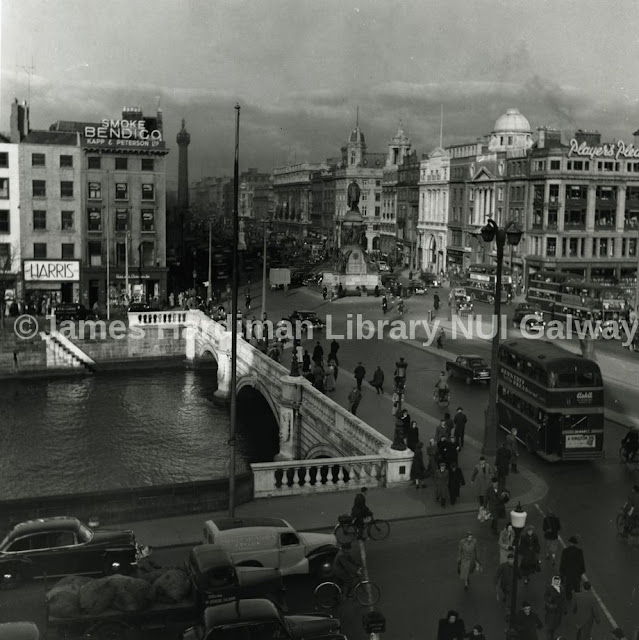