Eoghan Ó’Tuairisc - The Archive of a Bilingual Writer 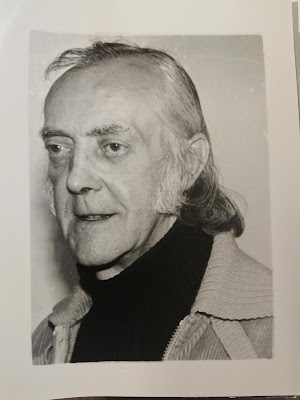 Born in Ballinasloe, Co. Galway in April 1919, Eoghan Ó’Tuairisc (Eugene Watters) was a bilingual writer, with a prolific output through both Irish and English, of poetry, stories, prose, novels and plays. He was educated at Garbally College in his home town of Ballinasloe before joining the army in 1939. His parents were Thomas Watters, a shoemaker, who had been wounded at the Battle of the Somme in France during the First World War, where he was a member of the Connacht Rangers. And his mother was Maud Watters (née Sproule), was a seamstress and clairvoyant.

Following his time in the army, Ó’Tuairisc enrolled in St. Patrick’s College where he trained to be a teacher. The college was run through Irish and which further extended his fluency. He qualified as a primary school teacher in 1939. He later undertook an M.A. at University College Dublin, graduating in 1947. Ó’Tuairisc married the artist Una McDonnell in 1945 but who died suddenly in 1965. Following a period of personal and artistic withdrawal, Ó’Tuairisc married the poet Rita Kelly in 1972. He was the recipient of numerous literary awards throughout his life for his bi-lingual writing and was also elected a member of Aosdána.

Ó’Tuairisc won the Hyde Memorial Award for his early novel, L’Attaque, in 1962. In 1964, his book of Irish poetry, Lux Aeterna again won the award. In 1966, Dé Luain won the American Cultural Award and a stage-play, Lá Fhéile Michíl won the Oireachtas prize. Ó’Tuairisc is associated with a number of theatres in Dublin and Galway, such Taibhdhearc na Gaillimhe, who staged his 1974 play, An Hairyfella in Ifrinn. He also won an Oireachtas prize for his play Aisling Mhic Artáin in 1977. As well as having works staged at An Damer theatre in Dublin, Ó’ Tuairisic also contributed to work at the Peacock stage and the main stage of the Abbey Theatre, such as Táinbocú, written by Ó’Tuairisc, Criostiór Ó Floinn and Gabriel Rosenstock (1979), and the political revue, A State Of Chassis (1970) with John D. Stewart and Tomas MacAnna. 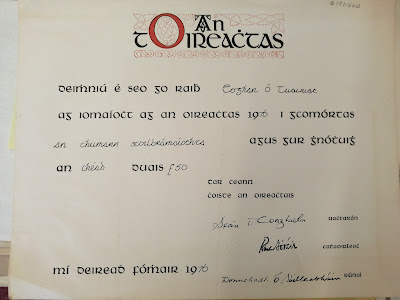 The Ó’Tuairisc archive at NUI Galway Library comprises twenty-six boxes of materials which documents Ó’Tuairisc’s literary and personal life, including manuscripts, drafts of work, correspondence with family, correspondence with Irish writers, editors and publishers, posters and programmes, photographs and a range of other material from the literary life over a number of decades. Files of letters are present from the likes of David Marcus, a long-time editor of Ó’Tuarisc at the Irish Press and Poolbeg Press, Tomás MacAnna at the Abbey Theatre, and other publisher of his poems and plays, such as Mercier Press. 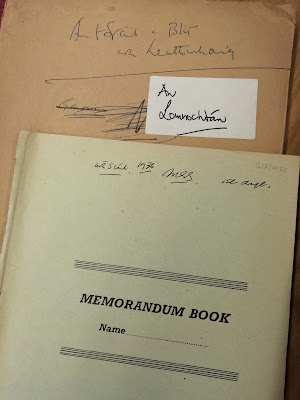 As well as letters from leading Irish writers, from Martín Ó’Direán to John McGahern, early manuscripts and drafts of novels, such as a memorandum book containing notes on characters and the order of chapters for a novel, which later became "An Lomnochtán" (recently translated by Mícheál Ó hAodha and published in English as “I am Lewy” by Bullaun Press), a commemorative work on the 1916 Rising, and numerous drafts, treatments, outlines, and research files, all capturing the literary process of Ó’Tuairisc. The archive is accessible at NUI Galway Library and the catalogue can be searched online here. 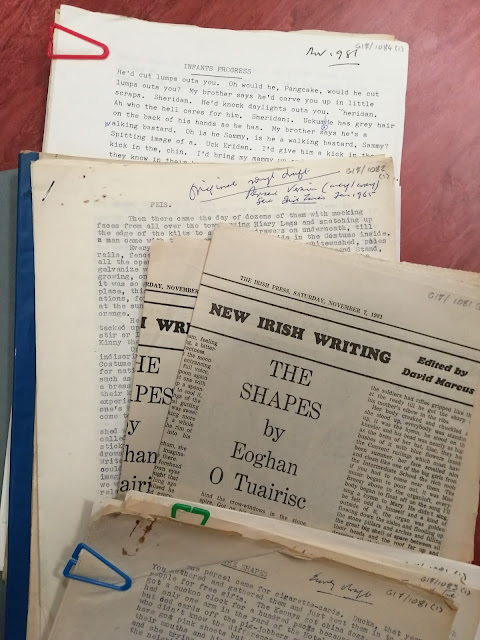 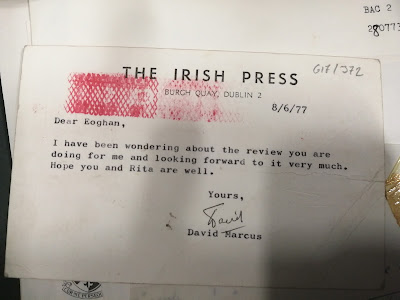 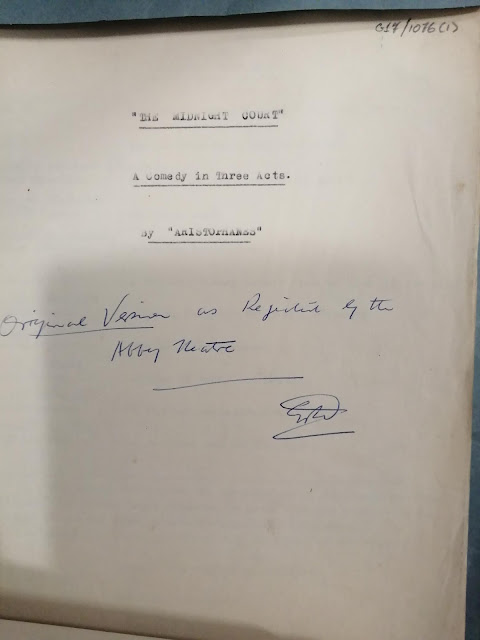 Posted by NUI Galway Archives at 3:49 PM No comments: