The 28th of February next marks the 130th anniversary of the birth of the author Padraic O Conaire. Perhaps best known as a short-story writer, he was also a novelist and dramatist. Born in the "Lobster Pot" Bar here in Galway to Tomas and Cait O Conaire, he moved to his material grandparents in Ros Muc in 1894 following the death of his parents, and later to other relatives in County Clare. He found his way to London where he worked in the Civil Service for a while, but was most active in the London branch of Connradh na Gaeilge, before returning to Ireland to work as an organiser or timire for Connradh. He passed in 1928. For further information on him, Lesa Ni Mhungaile's biography of him in The Dictionary of Irish Biography available here in the James Hardiman Library provides an excellent short introduction to the man and writer. 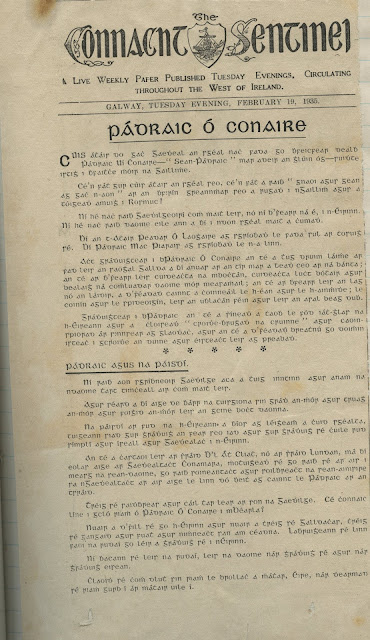 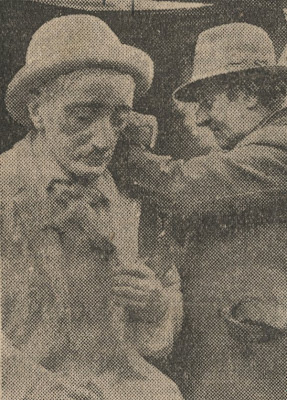 Perhaps the most iconic image of Padraic is the statute erected in his honour in Eyre Square, and unveiled by his Blackrock College classmate Eamonn de Valera in June 1935. Albert Power was commissioned to create the memorial by a group of Galway citizens. The statue is now to be seen in Galway City Museum. The archives service holds a collection of correspondence, subscription information and press cuttings relating to the commissioning of the statue, information on Coiste Chuimhneachain Pádraic O Conaire is available at http://archives.library.nuigalway.ie/col_level.php?col=G2 . 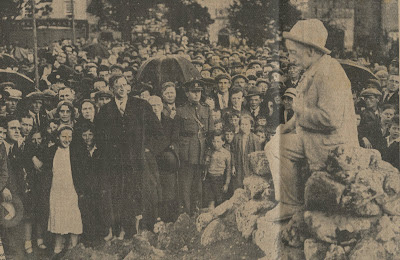 Posted by NUI Galway Archives at 10:37 AM No comments:

The staff of the Special Collections and Archives service in the James Hardiman Library have created a photographic display to celebrate the University’s hosting of this year's Sigerson Cup Gaelic Football competition on the weekend of 24/25 February. The University, then known as University College Galway (UCG), first won the competition in 1912. In all they have been winners on 22 occasions, including fifty years ago in 1962. A banquet celebrating that Golden Jubilee team is to be held in the Radisson Hotel on Friday 24 February where the photographic exhibition will be on display. Copies  of the photos , together with press cuttings relating to the various wins, will also be on show in the Sports Pavilion in Dangan that afternoon while the semi-final matches are on. 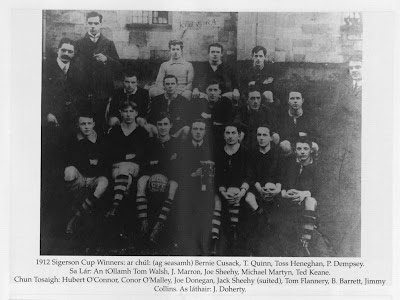 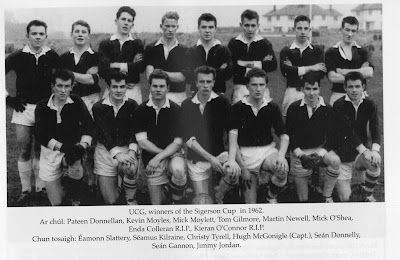 Posted by NUI Galway Archives at 9:20 AM No comments:

Currently in the process of being catalogued here at the James Hardiman Library is the Music for Galway Archive. Music for Galway is a group founded in Galway in 1981 with the goal of staging the very best of Irish and international classical music acts. Since the groups foundation they have staged hundreds of renowned groups, orchestras and musicians of all disciplines and catered to the musical passions and interests of so many in the West of Ireland.
As the process of cataloguing is continuing, which includes sorting and arranging the records into various groups and series, such as Administration, Productions, Press Files and Correspondence, and then describing and listing each item individually, the content of this archive is proving it to be a wonderful resource.
Here are two items sure to be of interest: the first is a flyer from a New Year’s concert held in January 1987 at the Aula Maxima, here on campus at NUI Galway. The concert, which was also staged at the National Concert Hall, Dublin, features a piano recital of the children’s story The Story of Barbar by the renowned pianist Ethna Tinney. Tinney has been a regular musician with Music for Galway over their past. Interestingly, this event also featured a narrator in the form of the celebrated actor Barry McGovern. Though best known for his work in and portrayal of Beckett plays, the combination of Music for Galway, Tinney and McGovern must surely have been an incredible evening.
Posted by NUI Galway Archives at 9:30 AM 1 comment: