Another edition of Digital Scholarship Series of talks and lectures is beginning this November at the Hardiman Building, NUI Galway. With sessions focusing on advances, new projects and research in the Digital Humanities from speakers locally, nationally and internationally, it promises to be a really exciting and interesting series. All information and contact details of organisers can be seen on the following poster: Posted by NUI Galway Archives at 9:25 AM No comments: 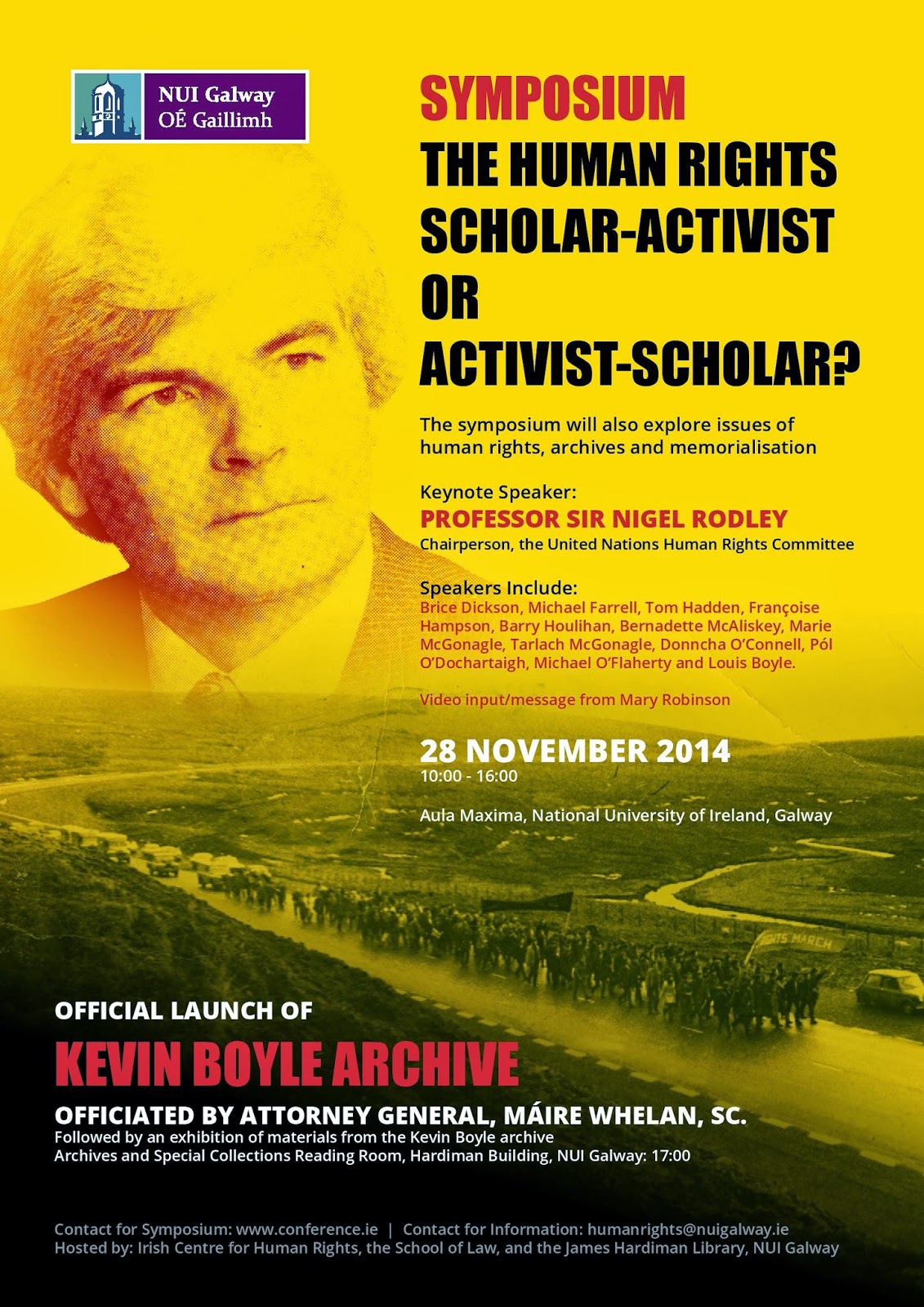 The family of the late Professor Kevin Boyle, co-founder of the Irish Centre for Human Rights (ICHR), has kindly deposited the Kevin Boyle archive at the James Hardiman Library, NUI Galway. This important archive has much to say about the pursuit of human rights in Ireland, the UK and internationally. The Archive will be launched at a series of events at NUI Galway on the 28th November 2014. A day-long symposium, organised by the ICHR and the School of Law, will bring together leading human rights scholars and activists to address the theme “The Human Rights Scholar-Activist or Activist-Scholar" and will also explore issues of human rights, archives and memorialisation. The keynote speaker is Professor Sir Nigel Rodley, Chairperson of the UN Human Rights Committee.

Following the Symposium, the Archive of the late Professor Boyle, catalogued and available at the Hardiman Library at NUI Galway, will be officially launched by Máire Whelan, S.C., Attorney General.

To register for Symposium:  www.conference.ie
Posted by NUI Galway Archives at 10:54 AM No comments:

The Will of James Hardiman

James Hardiman, historian and librarian was born around 1782. Hardiman was born in Westport, County Mayo, in the west of Ireland around 1782. His father owned a small estate in County Mayo. He was trained as a lawyer and became sub-commissioner of public records in Dublin Castle. He was an active member of the Royal Irish Academy, and collected and rescued many examples of Irish traditional music. In 1855, shortly after its foundation, Hardiman became librarian of Queen's College, Galway. The university library was later named in his honour.

From Errew near Westport, the site of Errew Franciscan Monastery was donated by James Hardiman, the foundation stone was laid on the 21st of July, 1840 and a great number of people were present. Dr. McHale, Archbishop of Tuam was the leader of the ceremonies. James Hardiman laid the foundation stone and placed coins of the day under it, the people of Errew helped with the building. Local tradition in Errew states that James Hardiman had a son called `Black James Hardiman`. `Black` James often visited the Monastery and had special rooms reserved for him there. He married a lady from Galway and lived in Dublin. When his wife died he left Dublin and it is believed that he had no family and his whereabouts were unknown.


This will of James Hardiman who died in 1909 fills in the details of this Black James Hardiman. Two beneficiaries are mentioned in the will Lily O’Flaherty Johnston of Kilmurvey House, Aran Island and Brigid (or Delia) O’Flaherty of 51 Leinster Road, Rathmines, Dublin. Lily and Brigid are sisters, and another sister, Julia, had married James. The O’Flaherties were middlemen who became the biggest landholders on Inis Mór, and feature strongly in Tim’s book Stones of Aran: Labyrinth. Because of this will we have an address for James in Dublin, and from the Census returns of 1901 held in the National Archives of Ireland and now available digitally, James’ age is given as 81 in 1901, and Delia’s as 45.

This will and it’s associated material relating to James Hardiman’s grave plot in Glasnevin, was donated by Tim and Mairéad Robinson  as part of their collection to John Cox, the librarian of the James Hardiman Library in September 2013. It is a link between the many strands that go to make up Humanities research. From the work of James Hardiman himself, to the folklore of his local area of Errew, available at http://www.castlebar.ie/clubs/ballyheane/bally2.html. Black James Hardiman features in the work of Tim Robinson in a footnote, that has contributed to an entry by Moore Institute scholar Deirdre Ní Chonghaile, who’s blog entry on the piano at Kilmurvey House available at http://aransongs.blogspot.ie/2013_12_01_archive.html fills in the O’Flaherty of Aran connection with James Hardiman. The address furnished in the will allows us to check the census returns in the online version of the 1901 census digitized by the National Archives of Ireland available at http://census.nationalarchives.ie/pages/1901/Dublin/Rathmines/Leinster_Road__Part_/1296656/ .

This will provides a tangible link with the family of the first librarian of this Library, and is an example of how one item can link and overlap with other research being done in the humanities.
Posted by NUI Galway Archives at 4:33 PM No comments: 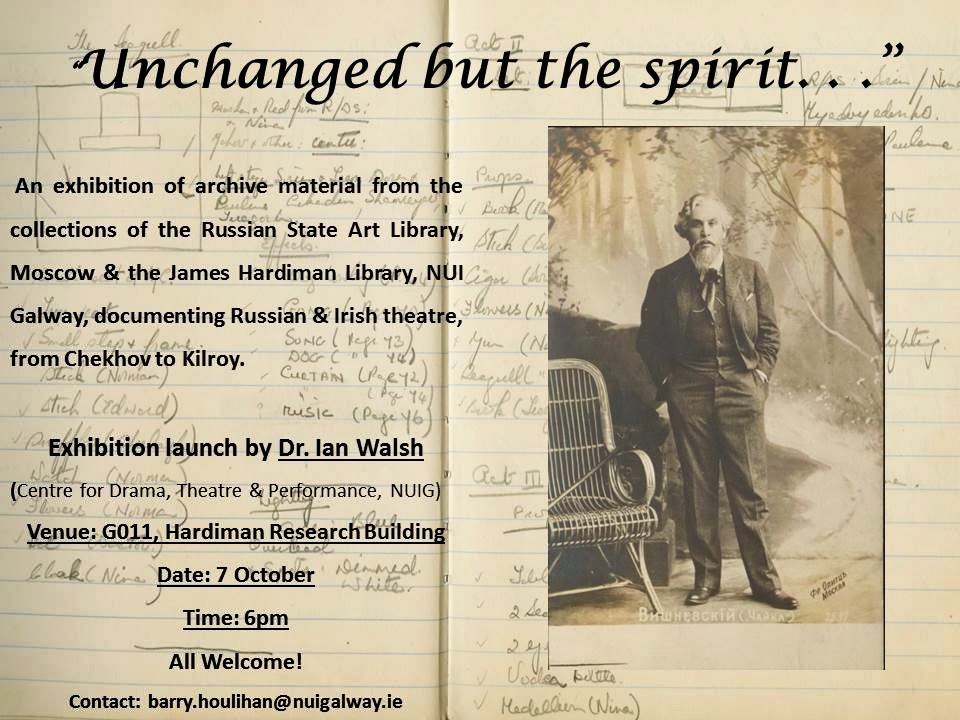 A new co-exhibition, “Unchanged but the Spirit. . . ’, launching 7 October 2014, between the James Hardiman Library, NUI Galway the Russian State Art Library, Moscow, will for the first time in Ireland, present archive material on the production and stage history of The Seagull by Anton Chekhov, from initial staging in 19th Century Russia to later adaptations in contemporary Ireland.

The Chekhovian classic The Seagull has engaged and provoked audiences since its Moscow premieré in 1896. From a poor initial reception from audiences and critics alike, the play was close to being abandoned and forgotten until it received its production at the Moscow Art Theatre, directed by Constantine Stanislavsky in 1898. Since then, the play has been regarded as one of Chekhov’s finest works. In an Irish context, the play received a translation and adaptation by playwright Thomas Kilroy, premiering at the Royal Court Theatre, London in 1981. In opening up and combining the archive sources of Kilroy and other theatre archives of the Hardiman Library and of the R.S.A.L collections in Moscow, the exhibition will highlight how across cultures, languages, societies and centuries, theatre and its impact can remain unchanged.

This exhibition will simultaneously stage material from the theatre collections of the Hardiman Library and the Russian State Art Library in both Galway and Moscow throughout the month of October and is a unique chance to see a visual and archival history of The Seagull, in its many manifestations, from Chekhov to Kilroy.

All are welcome to attend the launch of the exhibition by Dr. Ian Walsh, Centre for Drama, Theatre and Performance, NUI Galway, at the Hardiman Building (Room G011) at 6pm, Tuesday, 7 October. 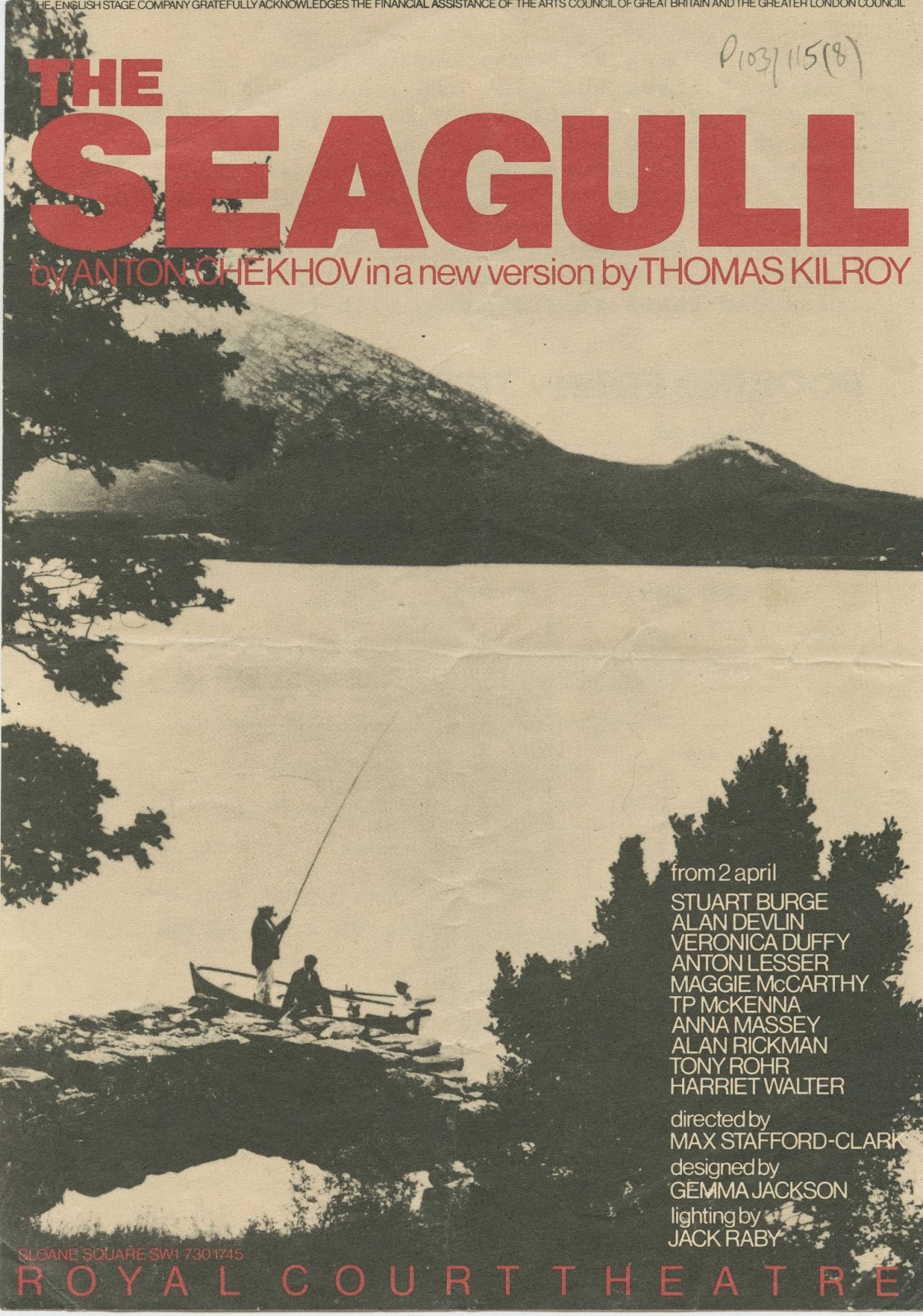 Posted by NUI Galway Archives at 9:38 AM No comments: