Looking forward to and back at the Galway Arts Festival

The annual celebration of all things creative and cultural, the Galway Arts Festival, has unveiled its program for 2013, which along with the sun shining high (as of time of writing!) is really marking the beginning of Summer here in the West.

The archive of the Galway Arts Festival, covering 33 boxes of archive material and over 200 posters, is deposited with the Archives and Special Collections Service of the James Hardiman Library, NUI Galway. It is a record of the beginings, growth and evolution of the festival, it's events, memories, people and stories.

The Galway Arts Festival was first staged in 1978. It was the culmination of the efforts and ideas that grew out of the University College Galway Arts Society. Ollie Jennings became auditor of this society, taking over from Garry Hynes, who became one of the founders of Druid Theatre Company. Under the direction of Ollie Jennings, this group, which included Paraic Breathnach, Marie Mullen and others, went on to become the Galway Arts Society. This new group set out to become a voice for the Arts in Galway and strove to find a permanent home for a dedicated Arts Centre in Galway City. Further to this was the aim of setting up an annual Arts Festival for Galway City. The first Galway Arts Festival was staged from the 6th to the 12th April 1978. It was described by Dickie Byrne in the Galway Advertiser as 'Galway Arts Society's Week of Craic'.

The central venue was one of John Murray's converted antique rooms between Raftery's Store and the old Genoa (Nora Barnacle's) The line-up at this original Galway Arts Festival included readings by John McGahern, Paul Muldoon and John Hewitt, the opening of film by Bob Quinn entitled Poitin, instillations from visual artist James Coleman and puppet theatre from Jay Murphy and Brian Bourke. Following the success of this first Galway Arts Festival, it was expanded in 1979 and received an increased grant from the Arts Council. An additional Festival space was also opened up for use at the old Pro-Cathedral.

The Galway Arts Festival is today one of the most diverse and successful arts festivals anywhere in the world and is a highlight on the Irish Arts calendar. Over the coming months and in the lead up to the Festival we will bring you some highlights, memories and great images from great festivals past and recent.

The above image, being the GAF official poster image for 1991 is just one great image and we hope to bring you many more!
Posted by NUI Galway Archives at 9:50 AM No comments:

The Papers of the Language Freedom Movement


We are happy to announce the recent cataloguing of the papers of the Language Freedom Movement, which are now available to researchers here at the archives and special collections service of the James Hardiman Library!  The collection provides a thoroughly alternative view of the modern history of the Irish language, and offers another unique snapshot into an exciting decade of social change in Ireland.
This collection of papers spans the activities of the Language Freedom Movement from soon after its inception in 1966, until 1974 when its activities drew to a close.  A civil liberties advocacy group who campaigned for a change in state policy on the Irish language, the movement weighed in on a language debate that had been gaining momentum since 1961, from Fine Gael’s general election campaign in which they called for an end to the policy of compulsory Irish in state examinations, to the 1965 government White Paper on 'The Restoration of the Irish Language'.
The LFM objected to the compulsory element of Irish language education, and they believed the large amount of time devoted to teaching it affected the future prospects of children by drawing attention away from other subjects.  ﻿
The debate raged on amid the backdrop of the 50th anniversary of the 1916 Rising, quickly becoming one of the most emotive issues of the decade.  Impassioned exchanges took place at public meetings, at debates, and in the press, while more heated correspondence was exchanged behind closed doors.  Public meetings held by the LFM often descended into total chaos, with one notorious incident at the Mansion House in 1966 when a group of opponents turned up at the meeting, a stink bomb was let off, and a fight broke out.  Union Jacks were waved derisively at the stage.  The event took up many column inches in the days and weeks that followed.  ﻿
﻿﻿
﻿
The momentum was sustained by vigorous opponents in the field.  Christopher Morris, the President of the LFM took on critics with zeal, which sometimes yielded to frustration over the frequent misinterpretation of the movement’s intentions, commonly held to have been out to destroy the Irish language.  Counted among its ranks were the playwright John B Keane, and the writer Séamus Ó’Grianna.  On the opposing side of the debate, Dónall Ó’Móráin of Gael-Linn and Proinsias Mac Aonghusa, both of whom feature prominently in this collection, resolutely defended the validity of language revival and its methods.  Other noteworthy participants in the debate include Proinsias Mac an Bheatha and Pádraig Ó’Mathúna, whose collections are also among those held by the James Hardiman Library Archives.
The collection consists of files of press releases, speeches, correspondence, ephemera, and drafts for publications, and covers topics including the education system, political agendas, language disputes elsewhere in Wales and Belgium, RTÉ, as well as more philosophical issues such as civil liberties and nationalism.
It is available for viewing, and for further information, including accessing the finding aid, please phone 091-493353, or email aisling.keane@nuigalway.ie.

Theatre Archive Doc of the Month - 'A Whistle in the Dark'

The theatre archive document of the month for May is to coincide with the return and nationwide tour of Druid Theatre's DruidMurphy series. This 2013 season run showcases some of Tom Murphy's greatest literary and dramatic works, Conversations on a Home Coming and A Whistle in the Dark. Druid's relationship with Tom Murphy, dating back to when he was Writer-in-Association with Druid in the 1980s has allowed for the creation of an examining of Irishness, the Irish family and Irish history and society so visceral that enthrals audiences at home and abroad still to this day. 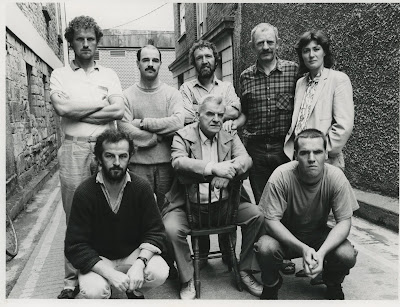 This document is a cast photograph from the 1987 production of A Whistle in the Dark, which was produced at the Jesuit Hall in Salthill and directed by Garry Hynes. This play's history is well worth noting as it received its premiere at the Theatre Royal Stratford East in London in 1961 having previously been rejected by the Abbey Theatre. In the photograph are: (l to r standing) Peter Gowan, Maeliosa Stafford, Johnny Murphy, Mick Lally, Corinne Ransom. (Front row, L to R) Sean McGinley, Godfrey Quigley, David Herlihy.


The Druid Theatre archive at the James Hardiman Library contains further records on the history of this classic murphy play. Interestingly, cast member Maeliosa Stafford (2nd from left, standing) is currently playing the role of 'Dada' in the current Druid Theatre production of A Whistle in the Dark. Further records relating to this play in the Druid archive include:


T2/153 Scope and Content: A Whistle in the Dark - Black and white photographs featuring cast members in costume and on set during rehearsal of A Whistle in the Dark. Contact sheets feature 11-12 images each. 2 items Also includes black and white images of Druid theatre members posing as a group outside Druid Theatre. Those pictured include Sean McGinley, Maeliosa Stafford, Mick Lally, Godfrey Quigley and others. Quigley is seated in these three pictures. Items measure 203mm X 254mm. Date: Jul 1987 Extent: 5 items


The Druid Archive catalogue can be viewed in full here.
Posted by NUI Galway Archives at 9:19 AM No comments:

Leitrim Co. Council, in partnership with National University of Ireland Galway, have announced that the seventh International Seminar will take place in Co. Leitrim during 23rd – 25th May 2013 to commemorate the work and literary achievements of John McGahern, one of Ireland’s best known and respected modern writers.

Contributors to the International Seminar will include eminent writers, critics and academics as well as local writers. The keynote address ‘Handrails to the Past: McGahern and the Memory of the Irish Revolution’, will be delivered by Professor Roy Foster. As well as appealing to all lovers of McGahern’s own work, the International Seminar will be of interest to literary researchers and to book clubs, to readers of contemporary fiction and modern writing, and to all national and international students of Irish literature and culture.


The James Hardiman Library is proud to hold the McGahern Archive amongst its holdings. Fully catalogued and available for consultation by readers, (see catalogue list here) the McGahern archive is an incredible insight into
the literary mind and the writing processes of McGahern as is represented by vast amounts of research notes and drafts of his greatest published and also unpublished fiction works in novel, short fiction, essays and drama. The personal and professional relationships that shaped the work and life of McGahern is explored through the series of correspondence and letters in the archive.

The library also holds a number of related collections including correspondence between John McGahern and his fried Niall Walsh (a medical doctor from Balinasloe) and a collection of correspondence between John McGahern and his American editor Patrick Gregory (This later collection is currently being catalogued).  We also occasionally receive individual items from members of the public.  For example we recently received this letter from the daughter of James Rigney one John McGahern’s lecturers in St. Patrick’s teacher training College in Drumcondra.


Fergus Fahey, Institutional Repository & Digitisation Librarian at the James Hardiman Library, who catalogued the McGahern archive, will give a talk at the Summer School entitled The John McGahern Archive at NUI Galway. His talk will give a general overview of what’s involved in cataloging a literary archival collection and describe the experience of cataloging the John McGahern collection in particular.  The drafts and other material relating to John McGahern’s 1979 novel The Pornographer will be looked at in detail.  As well as drafts of the published novel the archive includes drafts of some unpublished short fiction which was incorporated into the novel and also several drafts of a film script for an adaptation of the novel which was never produced.  The Pornographer was particularly well received in France and at one point it seems there was a plan for a French director to direct the film adaption.


The annual summer school is a must for McGahern scholars and the full programme and further details is available here.

To see more of the archive holdings of the James Hardiman Library, view our digital online guide.
Posted by NUI Galway Archives at 9:50 AM No comments: