"W.B. Yeats and the Arts" symposium at NUI Galway

Symposium: W. B. Yeats and the Arts

Moore Institute, National University of Ireland, Galway
Funded by the NUI Galway Millennium Fund, and the '1916 and After' project. 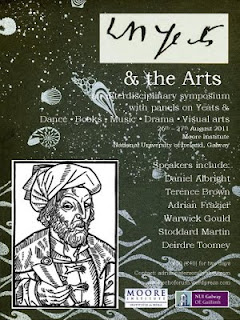 ‘The arts have failed', wrote W.B.Yeats, ‘fewer people are interested in them in every generation.' Fortunately, however, this gloom over the fate of ‘ingenious lovely things' only spurred him on to ever greater artistic engagement. His poetry, prose, and drama repeatedly address and incorporate music, dance and visual art, while his publications self-consciously deploy design and iconography. Yet Yeats was not only a author; he was also a cultural entrepreneur. He changed Irish public life by helping to found institutions such as Dublin's Municipal Gallery of Modern Art, the Abbey Theatre, and the Abbey School of Ballet. In collaboration with his sisters, Lilly and Lolly, he set up a printing press as a forum for Irish design and illustration. Together with his wife, George, he renovated the tower at Ballylee using local craftsmen. He took to the concert platform and later the airwaves to promote poetry spoken with music. Moreover, as a theatre director, journalist, public speaker and politician, he inspired numerous other cultural productions in Ireland and beyond.


This two-day international symposium, presented by ECHO, NUI Galway's Humanities Research Forum, and funded by the NUI Galway Millennium Fund and as part of the international research project ‘1916 and After', seeks to promote research on all aspects of Yeats's interactions with the arts, from storytelling to stained-glass windows. It offers a forum for discussing different historical, methodological and theoretical approaches, crossing disciplines to bring together critics of literature and drama, musicologists, and historians of dance and the visual arts. It thus includes panels on Yeats and Music, Yeats and Dance, Yeats and the Visual Arts, Yeats and Drama, Yeats and the Book, and Yeats and the Wider Arts, presented by the some of the finest scholars in the field. There will also be a conference dinner and an evening's entertainment of Joycean and Yeatsian songs.

As well as addressing key issues within Yeats's work, the symposium looks to wider debates in Irish studies, and cultural history and theory. It considers questions about the value and relationship of the arts, Ireland's role in European modernism, and the links between late-Victorian and modernist culture. Examining the interaction between aesthetics and politics, it also reflects on the political operation of centres of cultural production and the role played by art in political radicalism in Ireland in the period, leading up to the 1916 uprising and the revolutionary conflicts that followed. Through a focus on Yeats's work and career, it seeks to encourage further a growing body of cultural history and criticism based on genuinely interdisciplinary research.

The two-day symposium is free to all from NUI Galway, and €50 (€40) otherwise. All are very welcome.
For further information please look at our website: http://echoforum.wordpress.com/
or address the conference organisers:
Adrian Paterson (National University of Ireland, Galway) adrianpaterson@yahoo.com
Thomas Walker (University of Oxford/Trinity College Dublin) thomas.walker@ell.ox.ac.uk

Posted by NUI Galway Archives at 12:10 PM No comments:

Earlier this year the Archives and Special Collections service of the James Hardiman Library, NUI Galway were delighted to receive the personal archive of the celebrated playwright and novelist Thomas Kilroy. To mark this very great occasion, Professor Adrian Frazier of the Moore Institute, NUI Galway conducted a public interview with Thomas Kilroy, discussing at length Kilroy’s own personal life and experiences from his homeland of Kilkenny to his career as a playwright which brought him to world-wide notoriety.
The Kilroy archive contains research notes, drafts and scripts of all these and of his other plays, and his academic criticism. The creative work is complemented by correspondence from agents, theatre practitioners, publishers, and members of the public, as well as production material from the stage plays. There is a noteworthy collection of correspondence from literary friends and associates, such as Seamus Heaney, Seamus Deane, Mary Lavin, John McGahern, and also papers from his board membership of The Field Day Theatre Company, and from his collaboration with The Abbey Theatre. The papers join other purely literary archives at the Library, such as those of John McGahern and Eoghan Ó Tuarisc, as well as archival collections pertaining to the Druid Theatre, the Lyric Players Theatre, and Taibhdhearc na Gaillimhe. The collection is being processed and will be available to researchers from August 2011.
Watch and enjoy what is a really fascinating interview with one of Ireland’s most engaging writers.
An Interview with Thomas Kilroy from CELT NUI Galway on Vimeo.
Posted by NUI Galway Archives at 12:37 PM No comments: 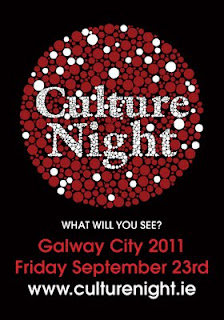 The wonderful ‘Culture Night’ is now only a few weeks away and we here at the Archives and Special Collections hope you will call by and enjoy what promises to be an entertaining and fun evening. Friday night, 23rd of September will see cultural venues and institutions open up to the public for a series of special events to mark the national initiative that is Culture Night.
Our events feature talks, info sessions and film events to give you, our users, a sample and insight to our wonderful archival collections. Talks, screenings and events will feature specifically on our extensive landed estates records, our theatre archives and also our literary collections. For any fans of writer John McGahern, archivist Fergus Fahy will give a talk about the personal archive of McGahern himself, which is deposited here in the NUIG archive. (The McGahern archive catalogue can be seen here: http://tiny.cc/apmso )
Marie Boran and Bridget Cleshan have this year launched the fantastic Irish Landed Estates database. The database provides an incredible record of Irish landed estates in Connaught and Munster from c.1700 – 1914. For anyone with interest in this period or for those working in genealogy, this is an event not to be missed.
The multiple award-winning Druid Theatre Company, based here in Galway, have committed their extensive and rich archive to the holding of NUIG. The production archive of Druid (1975 – 2008 is fully catalogued and available) To celebrate this proud link with one of Ireland’s premier theatre companies, we will be screening two pieces from their 2004 ‘DruidSynge’ series. “Riders to the Sea” and “The Well of the Saints” are two of Synge’s most acclaimed works and we are delighted to be screening them this Culture Night.
For details of events and times please click here
Events are staged in the Patrick. F Fotrell Theatre, Arts Millennium Building (Next to James Hardiman Library) All events are free and open to the public.
For any details or enquires about these events please contact barry.houlihan@nuigalway.ie
http://www.library.nuigalway.ie/collections/archives/
Posted by NUI Galway Archives at 11:10 AM No comments: 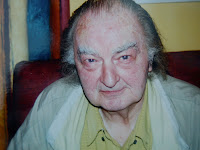 A recent edition of the RTÉ Radio One series Arts Tonight focussed on Irish playwright and poet Patrick Galvin. Galvin, born in Cork in 1927, became a writer after serving in the RAF during the Second World War. As a child he was sent to Daingean industrial school, which would serve as the basis for his well-known memoir Song for a Raggy Boy, which was made into a film starring Aidan Quinn in 2003.

Galvin had an enduring friendship with Mary O'Malley and served as the Lyric Theatre's writer in residence inthe 1970s. The Lyric's archive contains correspondence between Galvin and O'Malley as well as a large amount of production material on his plays We Do It For Love and My Silver Bird. In fact these two plays are the productions best represented in the archive, as they contain multiple drafts of the plays as well as other material. This material will be available later in the autumn.

You can listen to the Arts Tonight programme online here.

News from the Archive

It has been a busy few months here in NUI Galway Archives. Two major projects are nearing completion. The Lyric Theatre Belfast Archive and the Galway Arts Festival Archive are now both (just about!) fully listed. The catalogues will be available to the public in the very near future. The newly published Archives and Records Association Summer Newsletter carries some detailed coverage of the Galway Arts Festival Archive which includes material spanning the lifetime of Ireland's largest multidisciplinary Arts Festival.


The Galway Arts Festival was first staged in 1978. It was the culmination of the efforts and ideas that grew out of the University College Galway Arts Society. Ollie Jennings became auditor of this society, taking over from Garry Hynes, who became one of the founders of Druid Theatre Company. Under the direction of Ollie Jennings, this group, which included Paraic Breathnach, Marie Mullen and others, went on to become the Galway Arts Society. This new group set out to become a voice for the Arts in Galway and strove to find a permanent home for a dedicated Arts Centre in Galway City. Further to this was the aim of setting up an annual Arts Festival for Galway City.
For the rest of the article please click here
Another project continuing in it’s already much lauded success is the Irish Landed Estates Database. The second phase of the Landed Estates Database Project, covering the province of Munster, was launched on Friday 20th May 2011. This phase of the database deals with the landed estates of Munster, c. 1700-1920. It contains information and a guide to research sources for over 2,000 estates and some 3,200 historic houses in Munster. The database was created by Brigid Clesham, Archivist, and Marie Boran, Special Collections Librarian at NUI, Galway. For the rest of this article please click here
Posted by NUI Galway Archives at 5:25 PM No comments: 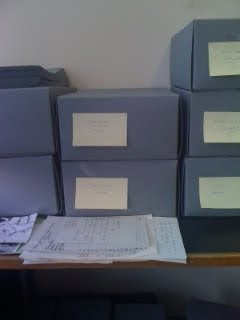 What you can see here on the right are the last two boxes to be catalogued in the Lyric Theatre archive! A wonderful sight!
There will still be a good deal of work to do once the cataloguing is finished, but the aim is to have the Lyric archive fully accessible to researchers by the end of September. The full finding aid will be available on our website then too - we'll be sure to inform you on here when that happens.
Sarah Poutch
Posted by NUI Galway Archives at 9:23 AM No comments: