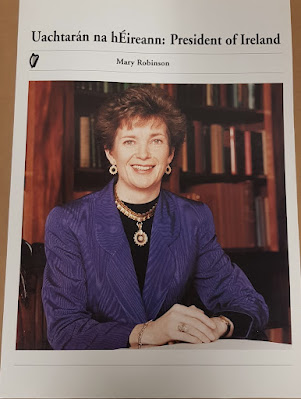 In January 2020 the task of processing the Mary Robinson archive in NUI Galway began. As project archivist, I am privileged to have this honour, and despite Covid_19 restrictions adding to the challenges, work continues apace. At almost 750 bankers boxes of material spanning over six decades, this immensely rich collection covers many different aspects of the former President of Ireland’s work, including her time as barrister, senator, professor, President of Ireland, United Nations High Commissioner for Human Rights, chair of the Elders, founder of Realizing Rights (the Ethical Globalization Initiative), and culminating in the setting up of the Mary Robinson Foundation - Climate Justice. As I near the end of the first phase it seemed a fitting time to introduce you all to the work of the archivist behind the scenes before a collection can be made available, to update you all on the progress and to give you a sneak peek.

The interest which greeted the announcement that work had commenced was fantastic but also led to my inbox unsurprisingly being inundated with queries! Because the job of the archivist is often misunderstood, it is easy to assume that all that was required of me once the material had been transferred to NUIG was to hand it out as requested. I have therefore chosen to detail the process involved to shine a light on the painstaking work that goes on behind the scenes, and hopefully to delay those queries for a little longer until I am further down the road. There are several stages to processing a collection before it can be made available and essentially they can be listed as follows: know what you have, make it safe, appraise it, decide on an arrangement, catalogue it, consider what should be made accessible (for example is it too frail, are there data protection issues etc.) and then release it. Separate to these are decisions on digitising where possible and appropriate. It can be daunting to know where to start when faced with hundreds of boxes of material but keeping these points in mind and having a plan is key. It is also important to familiarise yourself with the background of the collection, in this case getting a feel for the various areas in which Mary Robinson was/is involved. (The answer is LOTS!) 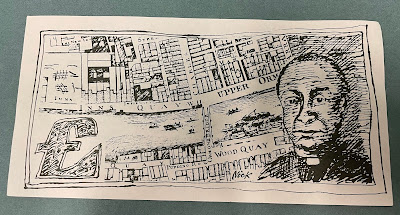 Due to the sheer vastness of this collection it was decided to divide the overall project into three sections.

KNOW WHAT YOU HAVE
Each one of the 750 boxes has to be opened and its contents examined before I know what is in the collection. This is the first pass and due to the size of the collection I decided to combine a few additional stages while conducting it:
MAKE IT SAFE
While examining the contents of each box, I am also checking their condition for problems such as mould that might spread. Contents are then removed from the current boxes and placed in specially designed archive boxes and folders that help preserve them. These boxes are then placed in secure storage in climate controlled storerooms. The material is now both secure from further deterioration, and from theft. It is also protected from environmental hazards such as fire and flood. During this process, I list the contents of each box (known as a box-list) and note what format the items are in (paper, photograph, CD etc.). This box-list not only summarises what is in the collection, it will also aid in deciding on an arrangement for the collection once the first pass is complete.
APPRAISE IT
Not everything in a collection should necessarily be kept – it may not be relevant or unique to that collection. There can also often be duplication of material and in some cases it may not be possible to suitably store an item due to its format, size or other practical considerations. For that reason the collection needs to be appraised. Appraisal is an important function of archivists and what separates them from colleagues in other related professions.
At the end of what I’ve termed The First Pass the entire collection has been made safe from the elements, we know what’s in it (to a basic level), and we know roughly where to find it. However, none of the items are stored in any particular order. The collection is safe from the elements and from theft but is not considered 100% safe yet from an archival point of view until an arrangement has been put in place, the material structured under that, and reference IDs assigned. That’s the next phase.

Under normal circumstances access is never given to a collection before it is processed. This is not because archivists are power-hungry gatekeepers! Rather it is because we simply don’t know what we have, where it is, what condition it is in, and what its context is until we have processed the collection. 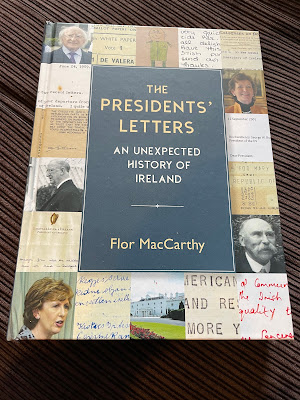 However, many of you may already have heard mention of this fantastic collection in national press in recent weeks. That is because of the recent publication The Presidents’ Letters, which came out late October and which features over 60 images from this archive. In an unusual move, author Flor MacCarthy was given permission by the donor of the collection to NUIG, Mary Robinson, to access the collection before it was released, and I was asked to facilitate any way I could.
An exception such as this is rare, but it made complete sense that a book covering the correspondence of all 9 Presidents of Ireland would include those of our first female president, who redefined the role. While Flor had access to a few processed boxes in early 2020, due to Covid restrictions the bulk of the material was selected by me as I continued to process the boxes. These selections were based on the topics and themes of Flor’s book which she had shared in advance, and digital copies were sent to Flor for her to browse.
It was a challenging but fun exercise that has resulted in an excellent representation of Robinson and her presidency in the book, but until the rest of the phases are complete, it will have to do for now! In the meantime here is a sneak peak of material from other areas of her work, to whet your appetites further. 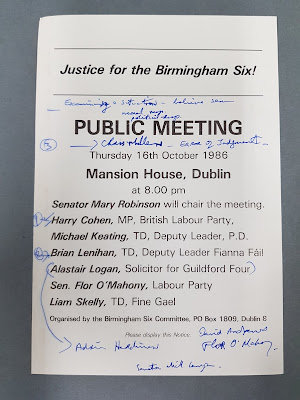 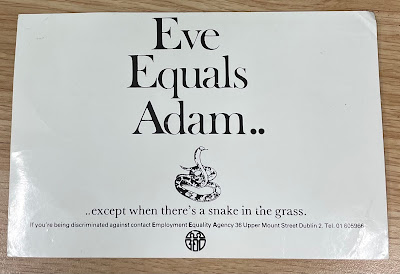 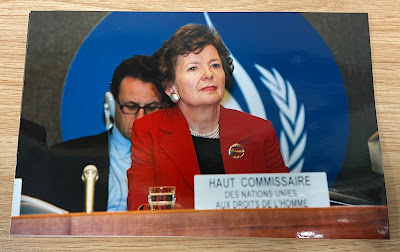 I hope this blog gives you an insight into the painstaking but incredibly rewarding work that goes on behind the scenes and I look forward to sharing this amazing collection with you all when the time comes.
Beir bua / Take care
Niamh 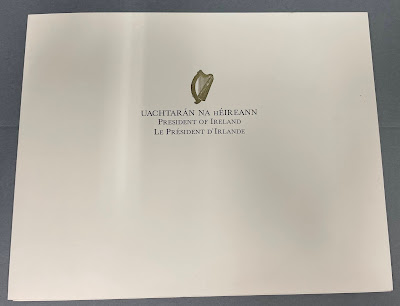 Posted by NUI Galway Archives at 10:55 AM No comments: