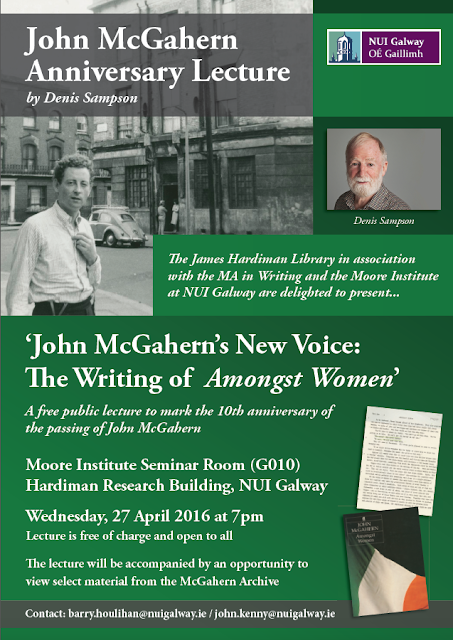 To mark the 10th anniversary of the passing of John McGahern, The James Hardiman Library in association with the MA in Writing and the Moore Institute at NUI Galway are delighted to present a public lecture by the renowned John McGahern scholar, Denis Sampson. The lecture, 'John McGahern's New Voice: The Writing of Amongst Women' will take place on Wednesday, 27 April at 7pm in the Hardiman Research Building, NUI Galway.

Sampson produced the first full-length study of McGahern’s works, Outstaring Nature’s Eye, in 1993, and his enduring critical attention to the writer culminated in his book Young John McGahern: Becoming a Novelist, published by Oxford University Press in 2012. Sampson has lectured and published widely on modern Irish writing, and he has also published a memoir, A Migrant Heart (2014). His new book from Oxford, The Found Voice: Writers' Beginnings, will be out next month.

The 30th of March this year was the 10th anniversary of the death of the celebrated Irish writer, John McGahern. McGahern’s work, from the 1960s up to his passing in 2006, has enthralled readers with his artistry and has engaged a succession of generations with his range of themes emanating from modern Irish history, culture and society. His reputation is as strong abroad as at home, and he is widely regarded as a master of the novel and short-story forms.

The rich John McGahern Archive at the Hardiman Library, NUI Galway preserves the documentary evidence of 'the writer at work'. In his lecture, Denis Sampson mines the Archive to trace the drafting and evolution of McGahern's 1990 novel, Amongst Women, and he reveals the ‘reinvention’ of McGahern as a writer through his writing of this major novel. In McGahern's papers, the characteristic personal traces of the writer can be found in voluminous manuscript copybooks and loose pages. The ideas that inform each work become clearer through these papers, and his artistic process is made clear in the exhaustive level of revision and redrafting he brought to his emergent novels and stories.

Looking forward to Sampson’s lecture, Dr John Kenny, John McGahern Lecturer in Creative Writing and Director of the MA in Writing, NUI Galway observed: ‘The nature of John McGahern’s Archive here at NUI Galway ideally suits it to different kinds of exploratory readers. Scholars of McGahern, or of contemporary Irish fiction and writing, naturally find it a highly valuable resource, but the papers also hold great promise for any student or devotee of writing intent on emulating the best models for creative practice and artistic dedication’.

John Cox, University Librarian, NUI Galway comments: "We treasure the John McGahern archive as an enabler of new research and are greatly looking forward to Denis Sampson's lecture as a very appropriate way of marking the tenth anniversary of John's passing."

In his lecture, Sampson will discuss unpublished drafts of Amongst Women from within the McGahern Archive and will reveal the links between the novel and some of the earlier McGahern short stories in his collections Getting Through and High Ground.
The lecture will be accompanied by an exhibition of select material from the McGahern Archive and is free of charge and open to all.

Posted by NUI Galway Archives at 6:05 PM No comments:

'Yeats and the West' public lecture by Adrian Frazier

A Disturbing Influence: Maud Gonne in the life of W.B. Yeats
Adrian Frazier, NUI Galway
Public Talk  - Free Entry
6pm Thursday 14 April
The Model Theatre, Sligo
This talk is an incendiary look at an incendiary relationship: that of Maud Gonne and W.B. Yeats. Using never before unearthed material it takes us inside a troubled and troubling connection made from politics, personality, poetry, magic, deceit, and love.
A native of St Louis, Missouri, Professor Adrian Frazier (NUI Galway) pursued his fascination with Irish literature and theatre to the west of Ireland, and now lives in Galway. He is the author of Behind the Scenes: Yeats, Horniman, and the Struggle for the Abbey Theatre (Berkeley: University of California 1990), an acclaimed biography of the Irish novelist and memoirist George Moore and his cultural milieu, George Moore, 1852-1933 (New Haven: Yale UP 2000) and Hollywood Irish: John Ford, Abbey Actors, and the Irish Revival in Hollywoood (Dublin: Lilliput Press 2011). His most recent book is an illustrated pen portrait of artist and sculptor John Behan entitled John Behan: The Bull from Sherriff Street (Lilliput Press 2015). His new book is a joint biography of W.B.Yeats, Maud Gonne, and her lover the French political activist Lucien Millevoye, recasting completely our view of the personalities and politics of this incendiary love triangle.

Last week the first lecture in the weekly series was delivered by exhibition curator, Dr. Adrian Paterson of the School of English, NUI Galway. The audience were brought on a journey through the world of Yeats' Innisfree and what that place meant to the young Yeats as well as how it stayed as a place of refuge and inspiration for Yeats throughout his life.

The 'Yeats and the West' exhibition joins the Model Gallery, Sligo following its initial run at the Hardiman Building of NUI Galway. The exhibition was officially launched in Sligo by Professor Jim Browne, President of NUI Galway. Speakers on the evening of the launch also included Donal Tinney, Chair of the Board of the Model Gallery, Adrian Paterson, NUIG and Senator Susan O'Keefe, Chair of the Yeats150 programme.

All upcoming events at the Model Gallery for Yeats and the West can be seen here:

For full details on the exhibition please visit http://yeatsandthewest.org/

Posted by NUI Galway Archives at 11:43 AM No comments: