The Many Lives of Albert Nobbs

Based on the story, The Singular Life of Albert Nobbs, written by Irish novelist, playwright George Moore, it tells of the life of a woman in 19th century Dublin passing as a male servant in order to survive, not just economically but socially. The story has often been retold on screen and stage owing to the enduring nature of the themes and life of ‘Albert’ in his many guises.


Most recently the film has been given the ‘big-screen’ film treatment starring Glen Close in the starring role. It was thirty years ago, however, when Close first played this role in an off-Broadway production in a stage version written and directed by Simone Benmussa.


The play was performed at the Manhattan Theater Club, in New York in 1982. The review from the New York Times of that production, dated 18 Jun 1982, makes special mention of the performance of the role of Nobbs by none other than a young actress called Glen Close:


“Miss Close, so lovely in ''Barnum'' and as Elena in ''Uncle Vanya'' at the Yale Repertory Theater, is almost unrecognizable as Albert. It is not simply a matter of her boyish hairdo -darkened and cut short - but of her manner, movement and sensibility. She is a timid youth who is efficient at work but without grace, eager to please but afraid to be expressive. The play is a curio, but the performance is transforming.”


Moving forward to 1996, Druid Theatre Company brought the Benmussa directed production to Druid Lane Theatre in July of that year. Jane Brennan would star in the role of Albert alongside cast members Dawn Bradfield, Aoife Kavannagh, Clara Simpson and others. The play would receive great critical and audience reception, with the Irish Times calling it “a rare harmony, a complete unity of execution”. The Druid archive, here in the James Hardiman Library, hold many files relating to this production. The catalogue can be accessed in full here . The files relating specifically to this production are as follows:


T2/233 Scope and Content: The Singular Life of Albert Nobbs - From a story by George Moore and directed by Simone Benmussa. Produced at Druid Lane Theatre, Galway. Includes original printed playbill from the production, featuring an article on the play and the works of George Moore by Elizabeth McConnell, Trinity College Dublin, biographical details with images on the cast members and Simone Benmussa and other details. 4 copies. 88 pp Printed flyer from the production featuring play information and booking details. 4 copies. 8 pp Printed invitation to the opening night performance of The Singular Life of Albert Nobbs. 1p. Date:9 Jul 1996 Extent:97 pp


T2/235 Scope and Content: The Singular Life of Albert Nobbs - Typescript press release from Druid Theatre Company regarding details and promotion of The Singular Life of Albert Nobbs. Also includes biographical details on Simone Benmussa and excerpts of press commentary on the production of this work by Druid. Also includes a photocopy of typescript chronology of the life of George Moore, author of the story on which this play is based.   Date: Jul 1996 Extent:14 pp 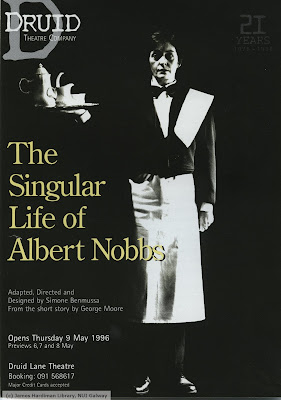 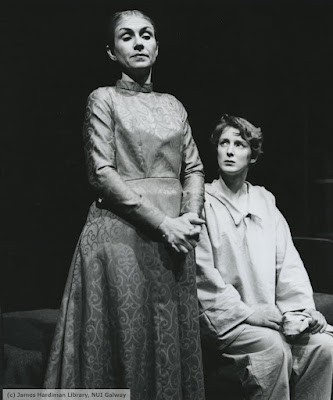 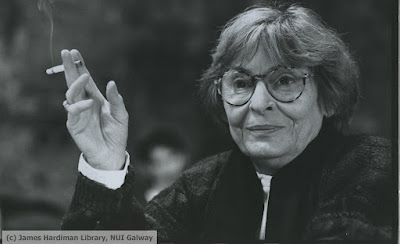 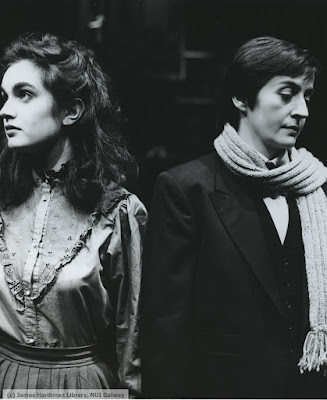 Posted by NUI Galway Archives at 12:16 PM No comments:

From Belsen to Galway - the Music of Yehudi Menuhin

One of the worlds most celebrated and respected violinists, Yehudi Menuhin, delighted Galway audiences in 1988 as he performed there for the first time. As part of the 1988/89 season, Music For Galway organised the concert in November where Menuhin conducted the Irish Chamber Orchestra and also featured cellist Daire Fitzgerald. The concert was held at Leisureland, Salthill.

﻿﻿
Menuhin (22 April 1916 – 12 March 1999) was a Russian-American Jewish violinist and conductor who spent most of his performing career in the United Kingdom. He is often considered to be one of the greatest violinists of the 20th century. The press release issued by Music For Galway in 1988 publicising this concert outlines the many reasons why Menuhin is so highly revered. “Yehudi Menuhin is of course most famous as a violinist but the list of his other achievements is also staggering. He is particularly dedicated to young people and to the cause of world peace …Menuhin’s role as a conductor has been increasingly important in recent years. He is President and Associate Conductor of the Royal Philharmonic Orchestra, the Warsaw Sinfonia and European Community Youth Orchestra.”


Menuhin was a boy prodigy, giving his first public concert début aged seven, he played Bériot’s Scène de Ballet accompanied at the piano by Louis Persinger. The outbreak of war in Europe in 1939 coincided with the birth of daughter Zamira and his first tour of South America later that same year. During World War II, Yehudi Menuhin gave more than 500 concerts for the Allied Armed Forces, in recognition of which he was awarded the French Legion of Honour, the Croix de Lorraine; the Belgian Ordre de la Couronne and Ordre Leopold; The Order of Merit from West Germany and the Order of the Phoenix from Greece. Menuhin went with the composer Benjamin Britten to perform for the inmates of Bergen-Belsen concentration camp, after its liberation in April 1945. He went back to Germany in 1947 to perform music under the conductor Wilhelm Furtwangler as an act of reconciliation, becoming the first Jewish musician to go back to Germany after the Holocaust.
In 1950 Menuhin challenged apartheid in South Africa and also undertook his first visit to Israel, despite threats against him. In 1989 he conducts Messiah in the Kremlin shortly after the collapse of the Communist regime. He has constantly been at the forefront of music and at the place and role of music in society and in its healing power on reconciliation.


In 1963, wishing to ensure continuance of the art of violin playing, Menuhin founded the Yehudi Menuhin School of Music at Stoke d’Abernon in Surrey, England, where it is still operating today. Yehudi Menuhin died in 1999.


The files in the Music For Galway Archive here in the James Hardiman Library relating to the concert by the Irish Chamber Orchestra and conducted by Sir Yehudi Menuhin are listed below:

Posted by NUI Galway Archives at 5:51 PM No comments: