One of the greatest perks of being an archivist is being the first to explore an archive for the first time. You get to look at long forgotten papers, photographs and publications that have not been looked at or thought about in a very long time by the creating organisation or individual. When you come upon a discovery that helps you better understand how the organisation worked, sheds more light on a certain subject or provides you with new evidence your excitement builds and you become engrossed in that file, letter or note. It takes a lot to pull yourself out of that discovery so that you can get to the next discovery in the collection.

Their standard bearer publications were Landmark a monthly magazine published from 1944 – 1973 and Rural Ireland an annual published from 1941 to 1972. Both of these contain a wealth of information on Muintir na Tíre, guilds/community councils and on the many issues facing Ireland. A future blog will look at these in depth.

The other publications of booklets and information sheets that Muintir na Tíre published contain a wealth of information for the guilds/community councils and for the local communities. They published booklets focusing on issues on community development by leading authorities in their field. 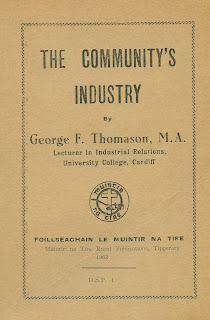 The Community’s Industry by George F. Thomason discusses how guilds can develop industry or entice industry to their community. Thomason was a former Chair of Industrial Relations in Cardiff University and was very interested in the work of Muintir na Tíre in the 1960s. 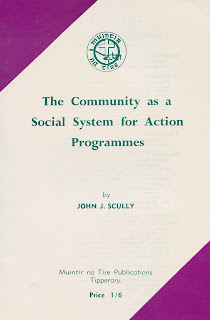 The Community as a Social System for Action Programmes by John J Scully discusses how information regarding new farming techniques and methods of operation might be disseminated to the everyday farmers in the shortest possible time. Scully as working in the Department of Agriculture in 1963 when this booklet was published. 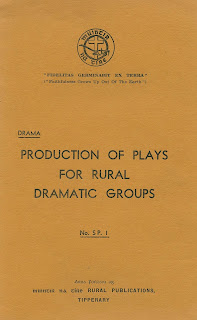 Booklets such as Production of Plays for Rural Dramatic Groups provided advice to guilds on how to select a play, produce a play, and stage a play, on acting and on costumes and make-up. Guilds were very active in the Amateur Theatre Movement in Ireland and this booklet would have helped in improving the drama group’s productions.

The Parish Halls booklet focuses on the use of parish halls in the rural community and gives advice on Trusteeship, Insurance, grants available and entertainment tax. 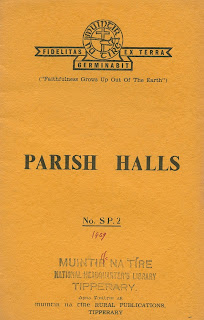 Muintir na Tíre also published booklets relating to itself and the running of guilds or community councils. 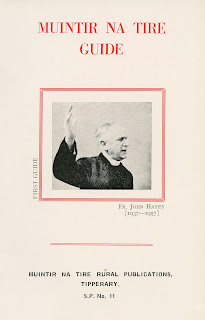 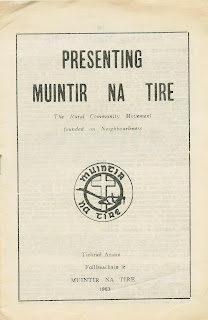 These are just some samples of the publications that Muintir na Tíre produced. These and many more will be available for consultation once the collection has been arranged and catalogued.
Posted by NUI Galway Archives at 3:50 PM No comments:

Post-Fact, Post-Truth . . . Post-Archive? The Place of Repositories in the New Misinformation Age

Posted by NUI Galway Archives at 12:39 PM No comments: