Ritchie-Pickow Archive - A view into the past

The Ritchie-Pickow photographic archive is one of the most visually striking collections held in the Archives of the James Hardiman Library, NUI Galway. The collection features a large volume of photographic negatives along with tapes of sound recordings. The photographs were taken and the recordings made by the husband and wife team George Pickow and Jean Ritchie on visits to Ireland in 1952 and 1953.


George Pickow was born in Los Angeles, but grew up in Brooklyn, New York. Following art training at the Cooper Union, he worked in all areas of photographic media, from making training films for the US navy during the second World War to illustrating children’s books for Scribner’s and the Oxford University Press. Jean Ritchie, singer, folklorist and dulcimer player was born in 1922 in Kentucky. She was the youngest of a family of 14 children, known as The Singing Ritchies. Jean graduated from the University of Kentucky in 1946 and taught for a time thereafter. George Pickow and Jean Ritchie married in 1950 and shortly afterwards, in 1952, Ritchie was awarded a Fulbright Scholarship to enable her to research the origins of her family’s songs in Great Britain and Ireland.


As well as assisting his wife in her research, George Pickow assisted Ritchie in the production and illustration of her many books on the traditional music of the Southern Appalachians, including the prize-winning Celebration of Life, and The Swapping Song Book (1952), a volume of songs from her native Cumberland Mountains of Kentucky.  Pickow also used the opportunity to do features on aspects of Irish cultural life including Christmas celebrations with straw boys and wren boys, life on the Aran Islands, Dublin scenes, the American Ambassador and his family in Ireland, the story of St Patrick, the development of Dublin Airport, operations of the Garda Síochána at Dublin Castle, and Irish sporting activities, such as road bowling, hurling, coursing, hunting and racing.


Photographs were also taken of traditional Irish crafts, for example spinning, weaving, thatching and crios and sliotar making. In a video recording made with George and Jean Pickow in the early 1990s regarding their visits to Ireland, George says that these photographic stories were for the Sunday News in New York.


The photographic archive is comprised of one hundred and sixty seven sheets of black and white contact prints with corresponding negatives, numbering one thousand eight hundred and eighty seven photographs in total. The majority of the photographs were taken using Kodak safety film and these negatives are unfortunately not numbered so the sequence cannot be followed. The last ten sheets of photographs were taken using Eastman 5 6 super XX safety film and Ilford hypersensitive panchromatic film, these negatives are numbered. There are also one hundred and ninety prints in two sizes, 19x19 cms and 27x27 cms, of which ninety five are mounted.


The James Hardiman Library was pleased to be approached by the McMullen Museum of Art at Boston College, Massachusetts, to include some images from the Ritchie- Pickow Collection for their new exhibition: Rural Ireland – The Inside Story. The exhibition offers “new and unique evidence about the varied lives of a marginalised population in a changing Irish Society” and focuses on tenants, farmers, Famine-era Ireland, rural Ireland, music, dance, marriage customs and continuity and change in Irish rural life.


In the Irish Times, Fintan O’Toole has written about how he visited the exhibition at the McMullen Museum and gave his thoughts here. O’Toole writes:


“The domestic sphere can’t be taken for granted: it may be abandoned in mass emigration, an awareness that haunts even an apparently simple image such as James Brenan’s News from America (1875). Or it may be invaded and torn asunder as in Harry Jones Thaddeus’s An Irish Eviction (1889), in which the action is seen from what should be the private, domestic space inside the cottage. Domesticity in the Irish context isn’t banal or cosy. It is a struggle for dignity and survival.”


“In however highly qualified a way, the images can be seen as collaborations. As Angela Bourke points out in a typically incisive essay in the catalogue: “In order to sketch or paint an Irish rural interior – a private space – the artist had first to gain the permission and cooperation of the residents. Prosperous families may have felt honoured by such attention, but poorer people can only have been persuaded to admit the stranger and to pose for him or her by the possibility of financial reward. The finished image of an impoverished rural interior is a record of an economic opportunity, therefore, and probably of an economic transaction, formal or informal, in which both sides had parts to play.”


The Ritchie-Pickow archive offers insights into many of these societal and cultural aspects of rural Ireland in the mid-twentieth century.  The images cover a number of locations, Dunmanway in County Cork, Dublin, the Aran Islands and Northern Ireland. They cover a wide variety of activities, ranging from cultural, sporting as well as traditional farming and fishing technique, to the more modern activities associated with an Garda Siochana and Aer Lingus in the Dublin of the early 1950s.


A striking feature of the archive is its depiction of life on the Aran Islands in the 1950s. Image show scenes of the rugged and challenging landscape, exterior and interior of cottages, scenes of domestic and family life, skills such as weaving, sailing and farming and cultural scenes such as cooking, dancing, praying as well as striking portraits of people and many other scenes of life for the inhabitants of the Aran Islands.


In contrast, these images are contrasted excellently by the hundreds of photographs of scenes from Dublin City of 1950’s Ireland. The images of Dublin highlight the many wonderful streetscapes and landmarks such as O’Connell Bridge and Statue, O’Connell Street, the Ha’penny Bridge, street traders and sellers, Trinity College, Grafton Street, various shop and business fronts, the American Embassy, the headquarters of an Garda Siochana and Dublin Airport.


The archive is a truly unique resource and allows for an unprecedented view through a lens to a different and much changed Ireland. For further information on the Ritchie-Pickow archive and for access to digital copies of the photos, see http://www.library.nuigalway.ie/collections/archives/depositedcollections/featuredcollections/ritchie-pickowcollection/
Posted by NUI Galway Archives at 10:24 AM No comments:

On this day in 1923 Liam Lynch, O/C IRA was shot and fatally wounded effectively bringing to an end hostilities in the Irish Civil War. Today's document is from the Frank Carty Papers (POL7) and is a letter from Liam Lynch to O/C 3rd Western Division reviewing activity in Frank Carty's Brigade in Sligo. 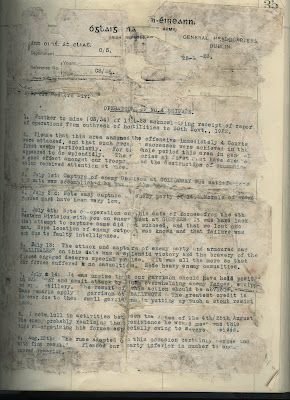 Frank Carty was active in the War of Independence 1919-21. He became Officer Commanding Number 4 Brigade, 3rd Western Division, which operated in the Sligo area. During this time he escaped from Sligo Jail in May 1920, was recaptured, escaped from Derry, was training IRA men in Glasgow and was involved in a shootout on the streets there. On the outbreak of the Civil War he sided with the anti-treaty side and was active in a number of operations from his base in the Ox Mountains. He was elected to the second Dail in June 1921 and served through nine general elections, first with Sinn Fein and later with Fianna Fail. 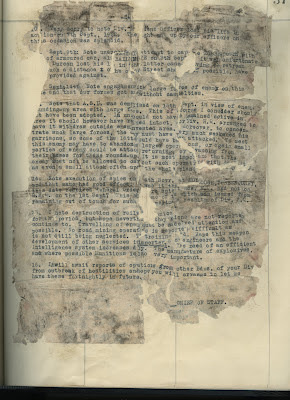 This letter, damaged in parts, is from [Liam Lynch] Chief of Staff, Oglach na hEireann to O/C/ 3rd Western Division, dated 28th November 1922, thanking him for his report on the activities of the Number 4 brigade. It notes for the 13th July: "The attack and capture of the enemy party and armoured car "Ballinalee" on this date was a splendid victory and the bravery of the forces engaged deserve special praise". Ends with general comments on the need to develop road-mining and the manufacture of weapons and munitions.
Posted by NUI Galway Archives at 6:02 PM 1 comment: