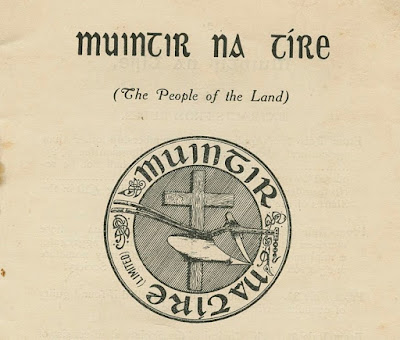 My ‘association’ with Muintir na Tíre goes back to early 2013. A long fascination with the workings of rural communities led me to undertake some research on the formation of the Ráthcairn Gaeltacht in Co Meath for a magazine article. That research took me on something of an unexpected journey from Meath to England and back.  An organisation of English agrarians named the Catholic Land Movement had kept a watchful eye on developments in Ráthcairn, believing that the blueprint for this engineered community of small farmers could be adopted in England to suit their rural utopian ambitions.

Their interest in Irish rural affairs was not limited to the embryonic Ráthcairn project, however.  Enamoured with the efforts of Canon Hayes and Muintir na Tíre in the area of rural community development, they viewed Muintir as an inspiration and kindred spirit. Examining many contemporary newspapers I discovered a speech by Catholic Land Movement leader Harold Robbins at a Muintir ‘Rural Week’ in 1938 which emphasised, as he saw it, the connections between the rural mission of his organisation and that of Muintir. Hailing ‘the genius of our common philosophy’, he argued that there were now widely scattered groups across the globe in an almost identical struggle against the excesses of industrial capitalism.[1] This one sentence brought forth so many questions, and ultimately changed the course of my academic research.  Firstly, who were these groups engaged in an identical struggle? What was the struggle? And what role did Muintir na Tíre play in it all?  This formed the basis of my MA thesis and subsequent PhD studies.

Completely new to Muintir, I was unsure where to go next. Several conversations with people in NUIG, particularly Dr Tony Varley provided some invaluable leads, for which I am still extremely grateful.  One of these conversations led me to Mr Tom Fitzgerald, Muintir na Tíre member and one-time secretary to the movement’s leader, John Hayes. Over the course of a long conversation with Mr Fitzgerald, in which we spoke about Canon Hayes, the origins of the movement and its place in Irish society, Tom told me about the Muintir archives which were at that time stored in the old gaol house in Tipperary town. I was kindly invited to come down and explore them and use what would be helpful in my research.

At the time I knew so little of Muintir that I would not have known where to begin with such a resource, therefore I respectfully and temporarily declined. I was, however informed a couple of years later that the Hardiman Library had acquired the Muintir collection. I kept a keen eye on developments there.  The collection was now in the best hands and would be properly archived for researchers to explore.

My opportunity to finally explore this fantastic resource came once I had been accepted onto the PhD programme in Queen’s University in 2018. Indeed, I believe it was the possibility of using this relatively untapped resource which helped in my application. My research proposal was to investigate the international relationships Muintir na Tíre developed under John Hayes.  The first trip to the newly archived Muintir collection came in February of 2019.  Upon consulting the online catalogue I became aware of one important thing. I was correct not to take up Tom Fitzgerald on his kind offer as I would have been completely lost in such an expansive collection. 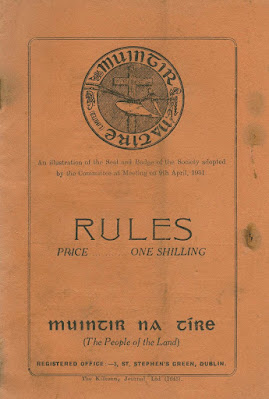 The NUIG Muintir na Tíre collection is breath-taking. It is only in person that one can get a sense of just how extensive, and valuable this resource is. Helped, of course by the expert advice of the library archivists, my Muintir archive journey began with Canon Hayes himself.  Hayes’s section of the archive contains enough for a PhD publication on its own. Collections of papers, speeches and correspondences provide a fascinating insight into the man who founded the movement and show the international impact he made.  There is, however, much, much more. Financial records, minutes, correspondences, rural week materials, the Muintir Film and Credit societies, as well as plentiful files on other key Muintir figures provides a goldmine of information for current and future social and economic historians.  There are many potential PhD’s and publications to come from this impressive archive.

Even in our uncertain present, where access to archives is limited, there is much to explore.  The Hardiman library have digitised a wealth of Muintir publications such as the monthly Landmark newspaper and the annual Rural Ireland publication. These resources have personally proved invaluable in these lockdown months.  Articles on Muintir guilds and regional activities appear alongside works by international contributors, showing that while the organisation was primarily concerned with the welfare of rural Irish society, they kept members abreast of international affairs, ensuring they had an informed society with a keen eye on global rural developments.

The Muintir na Tíre archive at the Hardiman Library is hugely important and tells us much about Irish society in the twentieth century. One hopes that once a corner is turned and some semblance of normality returns, that the materials contained within can be used again to their full potential, which should keep researchers busy for years, if not decades to come.

Posted by NUI Galway Archives at 2:00 PM No comments: