A Galway Wedding - From the Archives 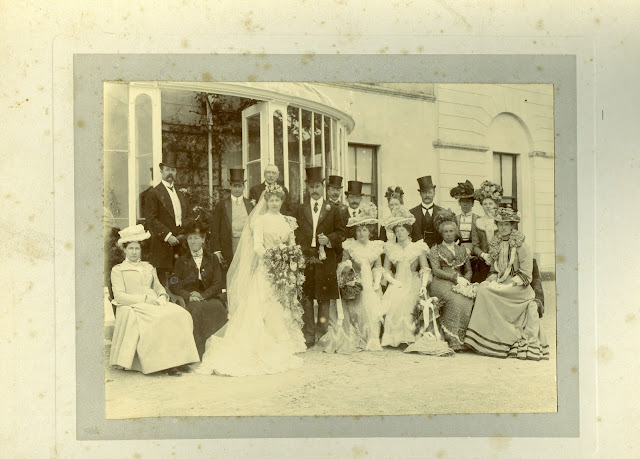 On 30 April, 1901 a wedding took place at the Roman Catholic church in Castlegar, three miles from the centre of Galway City. It would, perhaps, have been unusual for that church to see such a fashionable wedding party, accustomed as it was to the more restrained and plainer outfits of its parishioners, most from humbler or middle-class farming families. The bride on this occasion was Henrietta Kathleen Joyce, daughter of Pierce Joyce of Merview House. The eagle-eyed reader will spot that this photograph was taken in front of Merview/Mervue House, known to Galwegians in more recent times as Royal Tara China.

Kathleen was marrying a “neighbour’s child”: Thomas David Wilson-Lynch, of the Lynch family of Renmore House though at the time of his marriage he indicated he was living at Kilcornan House in Clarinbridge, the family home of his mother, Frances Redington.  Though he was the son of a family who had and still held a large landed estate, it is telling that Thomas recorded his profession as “local government inspector”, signalling the changing times that were then overtaking the landed gentry of County Galway. The witnesses to the marriage were Dr. Edward Stapleton and Lily O’Neill Power. Thomas and Kathleen had a daughter in 1906, baptised Catherine Anne Mary Wilson Lynch, afterwards known as Maureen, and in time she inherited the substantial archives of both the Wilson-Lynch and Redington estates. In the later 20th century she took the decision to deposit this archive in the James Hardiman Library where it is the collection known as LE6. The detailed list of its contents can be accessed on the Archives Catalogue at: http://archivesearch.library.nuigalway.ie/nuig/calmview/Record.aspx?src=CalmView.Catalog&id=LE6.

The archive descriptive list illustrates the breath of content of the collection, covering themes such as estate administration, social and political life as well as personal correspondence.

It is the largest of our landed estates collection and has provided the foundation for a number of studies including a monograph history of the Redington family of Clarinbridge by Joe Murphy (reprinted 2017 ) and articles by Geraldine Curtin (Galway Roots: journal of the Galway Family History Society, 1998) and Brigid Clesham (The Other Clare, 2001). In 2019 the archive was augmented by the addition of some photographs from the Redington family collection, including this splendid photo of a Galway wedding that took place 119 years ago.

Posted by NUI Galway Archives at 10:21 AM No comments: