As an early Christmas present into the work of Muintir na Tíre we have released the The Official Handbook/Rural Ireland annual from 1941 to 1955 online. This annual provides information on the guilds, those on the national executive and the work that Muintir na Tíre were involved in during the year. This is available for anyone to read and is available here. Thanks to the collaboration with colleagues in the Digital Publishing and Innovation Team.More journals will be coming on line in the New Year.

We hope you have enjoyed our blogs on the work that has been done on the Muintir na Tíre archive and some of the topics that have been discovered in the archive. This collection will be available for use for research in 2018 so do keep an eye out for when it will be released.
Posted by NUI Galway Archives at 6:19 PM No comments:

Christmas has inspired personal stories and writings for so many of Ireland's writers. From playwrights to novelists, the story of Christmas and what it means, in comedy and tragedy, for so many has resulted in great works, many of which are within the Archives of the Hardiman Library here at NUI Galway.

The writer John McGahern explored this particular time of year in one of his short stories. How that story even came to be is a story in itself. Christmas is the story of the young boy deposited to a family at Christmas time from an orphanage. He rejects a gift he is given, that of a toy aeroplane and this act forms the centre of McGahern's attention in the drafting of the story. The McGahern Archive contains numerous drafts of the story which was first published in the Irish Press in 1968. Numerous titles range from Santa Claus, A Gift for Himself, The Aeroplane, before finally being published as Christmas in the volume of short stories Nightlines in 1970.

The opening line of many of the drafts begin with "The thaw overhead in the bear branches had stopped the evening we filled the load for Mrs. Grey". This would imply that winter has passed and Christmas is over. Yet the published story opens with a different scene, one of a young boy being boarded onto a train, described as a "ward of State" and being sent to live with 'Moran' for the Christmas period. Moran is a recurring name within McGahern's work, also being the family name within his 1991 novel Amongst Women. The novel itself was nearly called The Morans, only to be changed very close to publication.

Given so much effort of redrafting, editing and re-titling of the story is evident with McGahern's papers, it is clear this particular story meant quite a deal for the writer in the late 1960s. The variances in handwriting styles also show the revisions were carried out over a number of years, as McGahern's hand changed over the years.

Another traditional Christmas tale is that of the Dickens classic A Christmas Carol. The Lyric theatre in Belfast staged in 1980 in a version by John Boyd. Boyd was a prolific playwright during the previous decade of the 1970s, writing some of the most important plays regarding the ongoing conflict in Northern Ireland with works such as The Flats in 1972 also presented by the Lyric Theatre. In his introduction to the play, Boyd writes of Dickens' story being linked to the plight of everyday life in Belfast at the time. The Lyric theatre founding director, Mary O'Malley, was so enthused with Christmas-themed drama that one of the very first productions by the Lyric players was a version of The Nativity, by Lady Augusta Gregory in November 1950. The script of this had to be procured from the Gate Theatre, Dublin, as seen in the letter here.
At the Gate Theatre itself, the theatre staged a revival production of Micheál MacLiammóir's Christmas play, Home for Christmas or A Grand Tour. First staged in 1950, in the original programme note, reproduced in the 1976 revival programme, MacLiammóir recounts how he was prompted to write the play by Orsen Wells about an prosperous English family touring across Africa and Europe at a time of Victorian empire and exploration. MacLiammór took that advice but set the story among an wealthy Irish family who are returning from world travels to Ireland for Christmas. 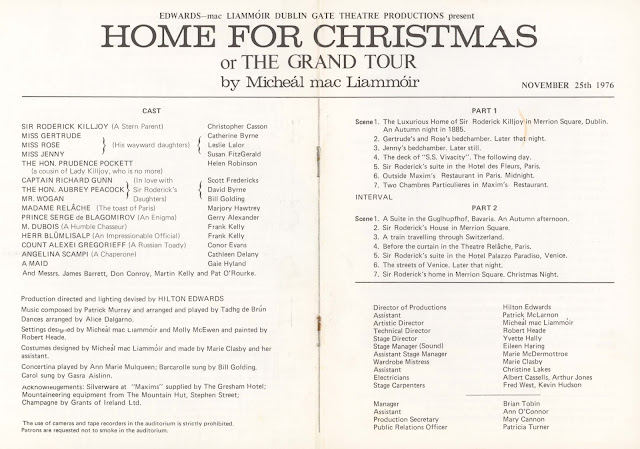 We wish all our readers a very
happy Christmas and best wishes for 2017!

Posted by NUI Galway Archives at 2:11 PM No comments: