The death occurred on 5 November 2018 of Dr Niall Walsh in Galway hospice. Dr Walsh was a friend of John McGahern’s and one of the longest extant runs of letters from McGahern to anyone rests in the Archives at the Hardiman Library, NUI Galway.

Born in Tullamore, Co. Offaly on 28 September 1930, Walsh studied medicine at U.C.D. and qualified in 1956. He spent 4 months as a ship's doctor, did some general practitioner’s work and then trained as a pathologist in the laboratories of U.C.D. He was appointed as Consultant Pathologist in Portiuncula Hospital, Ballinasloe in October 1964 where he remained for the rest of his career, retiring afterwards in the Ballinasloe area. He first met McGahern in about 1962 when the young writer called to his GP surgery with a chest complaint. They hit it off and began to meet regularly for a drink, O’Neill’s of Suffolk Street being a favourite watering hole.

After McGahern’s sabbatical year from his teaching post at Belgrove national school, Clontarf (1964-65) and subsequent sacking in the wake of the publication and banning of The Dark (1965), the two men drifted apart. On McGahern’s return to live in Cleggan, Co. Galway in late 1970, he contacted his old friend. The earliest letter in the collection is dated 18 May 1971 and in it John invites Niall and his wife, Phil, to visit Cleggan. Walsh replies four days later in typically good humour: “I was delighted to hear from you after all these years though I have kept track of your movements via the press since you left here. Shouldn’t you be lecturing to starry eyed co-eds in the States or drinking wine under olive trees in Spain instead of being in Cleggan?” Thus began a friendly, and sometimes revealing, correspondence that would endure until the final year of John’s life – the last letter held by NUIG is dated September 2005. McGahern died in March 2006.

At the prompting of Richard Murphy, who died earlier this year, McGahern returned to Ireland from Paris to live in Cleggan from November 1970 to September 1971. While there, Niall and Phil visited with John and Madeline. The Walshes themselves had a small house on Achill Island which they made available to the McGaherns from March to October 1973 – it was a place where McGahern worked hard on completing what would become his third novel, The Leavetaking (1974) – McGahern dedicates the book to Niall. The Walshes went on in subsequent years to visit the McGaherns in London, Newcastle-upon-Tyne and Paris. When the McGaherns moved to County Leitrim in 1974, the Walshes were regular visitors and for a time even considered moving to the area.


Over the years, the letters reveal, among other things, a shared interest in shooting, a candour about medical issues, and a willingness on John’s part to discuss his work in progress. John was especially frank with Niall during the course of his cancer treatment, Niall having survived his own brush with the condition in the early 1990s. Now, alas, cancer has claimed the lives of both men.

I met Niall Walsh around Easter 2016 in Galway’s Great Southern Hotel (or whatever it’s called these days) to discuss his memories of John. It was a marvellous meeting, with Niall full of life and sparkle. I found it almost impossible to believe that I was speaking to a man of 85: his recall was perfect and he had a charming mischief about him that endeared him greatly to me. When I heard of his death recently it was with a sense of real sorrow, but relief too that we had once had the chance to talk.

Frank Shovlin is Professor of Irish Literature at the University of Liverpool. A graduate of University College Galway and the University of Oxford, he is currently editing The Letters of John McGahern for a forthcoming Faber volume. In February 2018 he was appointed McGahern’s authorized biographer.

Posted by NUI Galway Archives at 3:44 PM No comments:


As we approach the end of November and we head towards the final stages of 2018 we pass some significant events in the process: the annual Explore Your Archive campaign draws to a close as does the year marking Bliain na Gaeilge and Conradh na Gaeilge’s 125th anniversary. It is a fitting time therefore to bring you all an update on the progress so far as I continue to process the Conradh na Gaeilge archive in NUIG. In the first blog of the series I noted the various stages vital to processing a collection before it can be made available: know what you have, make it safe, appraise it, decide on an arrangement, catalogue it, consider what should be made accessible, digitise where possible and suitable and then release it. Due to the sheer vastness of this collection it was decided to divide the overall project into three sections.

Phase 1 - The First Pass: this is the process whereby the contents of every box are removed, examined, listed and re-housed in special archive boxes which are then stored in secure climate-conditioned storerooms. It encompasses the first three stages listed above: know what you have, make it safe, appraise it.

Phase 2 – Arrangement: In order to get intellectual control over a collection, give it structure, and lay the ground work for making items easily discoverable to researchers down the road, a clear logical arrangement must be decided on by the archivist.

Phase 3 – The Final Countdown: this phase predominantly involves the painstaking work of cataloguing the collection, box by box, file by file, and in some cases item by item. During this phase items are also considered for digitising, and decisions made on accessibility which take issues such as GDPR into account. More on this in future blogs!

Happily I can report that Phase 1 is over 80% complete, well within the projected time-frame. 470 of approximately 580 boxes have been processed with the remainder due to be completed by the end of January / early February. Records have been removed from boxes that were buckled, disintegrating and overstuffed, and carefully placed in folders within archive boxes and stacked neatly on designated shelves within the storeroom. From chaos comes order!


A vital component in this initial phase which has been mentioned already is the task of appraising the collection. Not everything in a collection should necessarily be kept – it may not be relevant or unique to that collection, it may be a duplicate or in some cases it may not be possible to suitably store it due to its format, size or other practical considerations.

In the case of duplication decisions need to be made about what to do with such duplicates when they are discovered. Generally speaking archives will retain between 3 and 6 copies of an item. Any more and you quickly face storage issues. Any less and you limit the choices you have to exhibit, digitise or lend an item, since the best possible copy needs to always be kept safe. When an archive arrives to an institution an agreement known as a Donor Agreement is made between the donor (in this case CnaG) and the institution (NUIG) which covers many things including what to do with items not to be retained.

While duplication and practical considerations are self-explanatory, uniqueness needs a bit more explaining. Certainly if something is unique to your collection and not found anywhere else it obviously needs to be retained. But sometimes items become important and unique not for what they were originally intended for but for the secondary value they end up attaining. To give a good example of this let me digress momentarily and discuss my own personal archive. As a professional musician who has toured internationally for many years, I have some interesting items in my personal collection, none more so than a folder of sick bags! Why do I have such a thing you ask? Well because having being stuck on planes for hours at a time, when a melody comes into my head that I want to write down I use what’s to hand! Many of my compositions are thus written on sick bags and now stored in a folder. So imagine a blank sick bag (unused obviously!). Everyone understands its original purpose. But it is not unique. Now imagine a branded sick bag. Suddenly this item is unique to a particular airline, and perhaps to a particular period of that airline’s history if the branding has since changed. Now imagine one of my sick bags. Because of the compositions I have scrawled on them, they have now taken on a secondary value not relevant to the initial purpose but important and unique none-the-less. So when an archivist is appraising a collection, this uniqueness and potential for secondary value is a necessary consideration.


With 80% of the boxes examined I can safely say that this is a very rich collection throwing up expected and surprising treasures at every turn (no pun intended!). Since a donation of archive material was previously made by Conradh na Gaeilge to the National Library of Ireland in the 1940s it was suspected that this collection might not have very many items pre-dating that but I am happy to report that every decade from Conradh’s first in existence in the 1890s to the first decade of this millennium are covered.


Topics range from raising children through Irish to apartheid in South Africa, from organising Féile to campaigning for Civil Rights, from the work of the Timirí nationwide to the minutiae of company finances. Apart from paper items such as letters, reports, programmes, posters, chequebooks, invites and flyers, the collection also contains medals, brooches, badges, trophies, paintings, balloons, stickers, watches, pens, and even a framed £50 pound note! There are samples of bilingual packaging including a Welsh Tayto bag, a Monaghan Milk Carton and a Canadian Post Office envelope. Languages covered include Welsh, Breton, Manx, Scots-Gallic, French, German, Swedish, Finnish, Flemish, Basque, Greek, Bengali, Urdu, Hindu, and Mandarin. It is a fascinating collection that I hope you all get to enjoy in the near future…but not before I complete my work!


Between now and the end of the first quarter of 2019 it is envisaged that Phase 2 will be completed along with Phase 1. By that stage all items in the collection will be safe and secure, and a complete box list of the collection’s contents will then be used from which to plan an arrangement for the collection. Future blogs will cover this second stage and the subsequent work. In the meantime I hope you have enjoyed another glimpse at the work being carried out behind the scenes and the few gems I was able to share. Feel free also to check out the previous blog below.

The exhibition highlights the vibrant art of the west. It draws attention to the work of women in renewing Ireland’s culture, and the early years of Ireland’s theatrical renaissance.

In an exquisite drawing by Jack B. Yeats, the Roscommon poet and Irish-language playwright Douglas Hyde is shown acting with characteristic gusto, and Abbey pioneer William G. Fay shouts at the players in rehearsal. Alongside original woodcuts, Elizabeth Rivers' fabulous illustrations of island life for the very last Cuala Press book Stranger in Aran (1946) represent an extraordinary history of book production. Cuala Industries are also represented by fine art books and a unique banner handpainted by Elizabeth Corbett Yeats for publicity. The centenary of Robert Gregory's death is recalled through bookplates and unseen visionary landscapes as well as the poetry of W.B.Yeats.

Following controversial sales in the UK and Ireland which made headlines around the world, the rescue of such important items for the nation and future generations in the west by NUI Galway is thus cause for celebration. Join us to celebrate the launch of an exhibition which runs until Christmas. 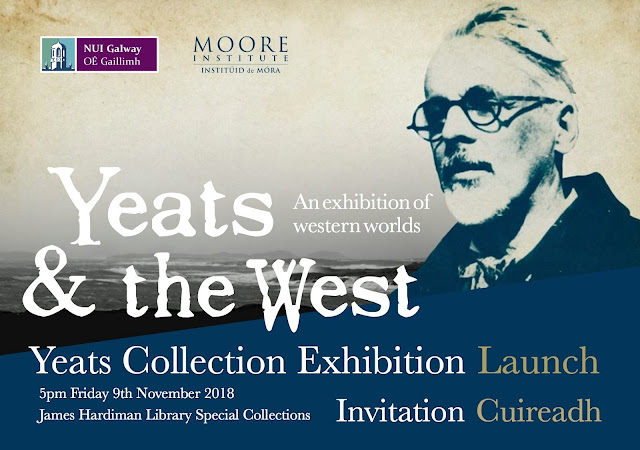 Posted by NUI Galway Archives at 3:56 PM No comments: