An item of interest to historians of numerous aspects of revolutionary Ireland will be this volume from within the collections of the Hardiman Library - the Fianna Handbook, issued by the Central Council of na Fianna Éireann, the forerunner to the Boy Scouts of Ireland and published in Dublin by E. Ponsonby, Limited, 116 Graftom Street.
The foundation of this boy-scout movement can be traced back to prior the foundation of the Irish Volunteers, to 1913. Bulmer Hobson, having managed a successful version of the group in Belfast was keen, along with Helena Moloney and Seán McGarry, Countess Markievicz and others to recreate a new Fianna Éireann movement in Dublin in 1909.
Though not clearly or directly indicated in the volume, the Handbook is thought to have been issued in 1913, which would again coincide with increased engagement and involvement with youth organisations and the formation of the Volunteers in that year and in the run-up to events such as the Easter Rising in 1916. Though it is interesting to spot that on the inside front title page, the image on the left includes an artist’s signature of ‘C de M, 1914’, perhaps indicating this could be a later printing or edition.

The volume is striking for many reasons but when one considers the list of contributors, there are very few publications of any kind that feature contributions from so many major protagonists and social and cultural figures of this time. The volume features an introduction from Countess Markievicz, President of na Fianna and who describes:
“the army of young people who are daily taking the Declaration of Na Fianna Eireann and banding themselves together in a glorious brotherhood of youth and hope to win Independence and Freedom for their country.”

“I promise to work for the independence of Ireland, never to join England’s armed forced and to obey my superior officers.” 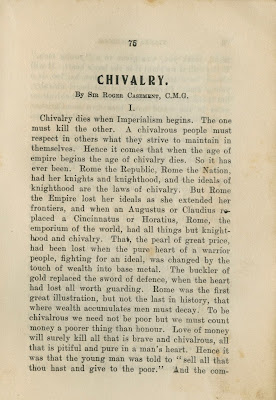 As well as chapters laden with diagrams for support of information on topics such as drilling, rifle exercises, camp life, knot-tying, signalling, first aid and swimming, there is also an essay on ‘Chivalry’ written by Roger Casement, who though writing for an audience of young boys was no less forthright and philosophical in his ideas on this topic:
“Chivalry dies when Imperialism begins. The one must kill the other. A chivalrous people must respect in others what they strive to maintain in themselves. Hence it comes when the age of empire begins the age of chivalry dies.”
Padraig Pearse, signing himself here as P.H. Pearse, B.A., Barrister-at-Law, invokes the folklore and history of the past Fianna, linking the recruits of ‘current historic companions’ to the first Fianna of over two thousand years ago. Pearse adds that “the story of those old Fianna of Fionn should be part of the daily thought of every Irish boy, and especially of every boy in the new Fianna.” Pearse relays in detail the story of the Fianna of Fionn and ends by reproducing Dr. [George] Sigerson’s translation of text from the book of Lismore which includes Acallam na Senórach, translated to English as The Colloquy of the Ancients, Tales of the Elders, etc. a Middle Irish narrative dating to the last quarter of the 12th century and an important text of the Fenian. It contains many Fenian narratives framed by a story in which featured the Fianna warriors Oisín and Caílte mac Rónáin. Following this poem, Pearse  issues this rallying cry to the boys of na Fianna:
‘Centuries afterwards an Irish poet said mournfully: “All the Fianna have passed away/There remains to them no heir.” – But what say the boys of na Fianna Eireann?”.
This volume is an incredible record of its time, when the leaders of this period and being contributors to this handbook were clearly focusing a lot of attention on the youth of the country.

1916 from the Archives - New Publications and Events

It has been a busy time of late with so many archive collections of the Hardiman Library pertaining to Ireland’s revolutionary period. It will come as no surprise, being the year that it is, that material relating to 1916 has been so prominent in new publications and TV programmes of late.

Tonight (Monday 18th January) a new documentary series will air on RTÉ One, 7.30pm, Ar Son na Poblachta. The first episode of the series focuses on the life and career of actor and revolutionary, Arthur Shields. An actor and stage manager at the Abbey Theatre and as a 17 year-old was caught up in the fervour of the Rising as it broke out around the corner from the Abbey Theatre, on O’Connell Street. The Hardiman Library holds the Shields Family Archive, comprising records relating to Arthur Shields and his brother William, more commonly known by his acting-name of Barry FitzGerald. The archive is a fascinating visual and written account of Arthur’s role in the Easter Rising, his Abbey Theatre career as well as the part he and his brother Barry played in the Irish invasion of Hollywood in the 1930s, becoming two of the major screen-stars of a golden age for Hollywood. (For more on this see Hollywood Irish by Professor Adrian Frazier)

An online exhibition of images from the Arthur Shields Archive and a link to its catalogue can be seen here. http://archives.library.nuigalway.ie:8080/digi/exbos/T13 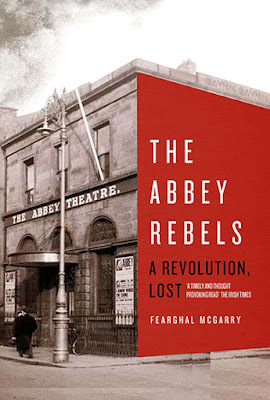 A new book by Dr. Fearghal McGarry, Abbey Rebels: A Revolution, Lost, was recently published and is a history of the varied and prominent roles played by Abbey Theatre personnel in the Easter Rising. The book features a chapter dedicated to Arthur Shields and exclusively reproduces high-resolution copies of many items from the Shields Archive of the Hardiman Library. You can read more about the book in its latest review.

NUI Galway, in partnership with the Abbey Theatre has also made digitally available and fully transcribed, the minute books of the Board of the Abbey Theatre, 1904 - 1939, incorporating not just the Revolutionary period and the emergence of the Free State, but also spanning a major portion of the lifetime of poet and senator, W.B. Yeats, one of the co-founders of the Abbey Theatre.

Throughout 1916 a series of major events will take place on campus at NUI Galway. A recent publication by NUIG 1916-Scholar-in Residence, Dr. Conor McNamara, is The Easter Rebellion 1916: A New Illustrated History. The book was singled out in the Irish Times as being one of the major publications of this time that revisits the complex history of 1916. The book offers a visual insight into the events and aftermath of the Rising and you can see a selection of those images reproduced by The Irish Times. 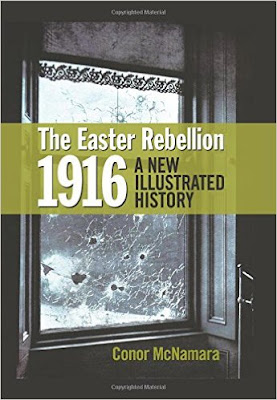 On 22-23 January a major conference, Proclaiming the Revolution will take place at the Aula Maxima, NUI Galway. Featuring leading scholars and researchers from NUI Galway, nationally around Ireland and also international speakers, the conference will provide a rich and varied platform for debating one of the key facets of the 1916 Rising, its Proclamation. The conference is free but booking essential. Details and speakers are available here: http://nuigarchives.blogspot.ie/2016/01/proclaiming-revolution-conference-nui.html

A major new exhibition focusing on the events of 1916 will also open in February 2016 at the Hardiman Research Building, NUI Galway. For a full programme of events for the NUI Galway 1916 programme, see A Nation Rising.

Posted by NUI Galway Archives at 2:32 PM No comments:

Remembering Alan Rickman - A star turn in Kilroy's "The Seagull" 1981

The news of the passing of actor Alan Rickman was extremely sad news for the vast amounts of people who had followed Rickman's varied career over forty years on stage and screen. Rickman, 69, was acclaimed for being one of the great character actors of his generation with a canny ability to enthral his audiences, from young and old, from  fans of Harry Potter to Dogma  or as an unequivocal De Valera in Michael Collins. Such was Rickman's charisma and presence, with an always distinct voice, was an ability to transform even a supporting character into a memorable and major role. You may not always remember the film but you always remember Rickman's character and all the great lines. (Sheriff of Nottingham: "That's it then. Cancel the kitchen scraps for lepers and orphans, no more merciful beheadings . . . and call off Christmas!" (Robin Hood – Prince of Thieves)

Rickman like so many screen stars began his career on stage and throughout a glittering Hollywood career maintained a successful stage curriculum vitae. Rickman was reported to be a pupil of renown at RADA and developed his craft on the fringe and regional circuit of the UK in the late 1970s and 1980s. Michael Billington, theatre critic of The Guardian notes that:

All this came to the fore in a golden period at the Royal Shakespeare Company in the mid-1980s when he was a stubbly, neurotic Achilles in Troilus and Cressida and a mockingly cynical Jaques in As You Like It. But it was his performance as the dissolute Valmont, successively in Stratford, London and New York, that elevated him to star status. Playing opposite Lindsay Duncan’s Marquise de Merteuil, Rickman conveyed both the lassitude of the practised seducer and the growing self-disgust of a man aware of his destructiveness."

It was during this time that Rickman would perform in a play by Irish playwright Thomas Kilroy. Directed by Max Stafford Clarke, the play was premiered at the Royal Court on 8 April 1981. The play would have its Irish premiere, produced by the Irish Theatre Company at Siamsa Tíre Theatre, Tralee on 30th September 1981.

The idea of the version of Chekhov's classic to be translated and moved from the Russian provinces and set in the West of Ireland case from the director of the Royal Court, Max Stafford-Clarke. He wrote to Kilroy as follows:

"Dear Tom, I have been talking with Joe Dowling about the possibility of the Royal Court and the Abbey mounting a joint production of THE SEAGULL. The idea is that the play should be cast with English and with Irish actors and instead of being set in Russia, should be set in the midst of an Anglo-Irish family . . . Would you be interested in doing a translation and would you have time for it?”

The adaptation that Kilroy would write featured Alan Rickman as Mr. Aston and the cast would also feature Harriet Walter, Alan Devlin and others. Within the Thomas Kilroy archive at the Hardiman Library, NUI Galway, the production files for Kilroy's Seagull offer a wonderful account of the development, writing and drafting of the play that stemmed from Stafford-Clarke's single letter. Billington would write in his 1981 review of the Royal Court London production:   It is a fine performance superbly backed by Alan Rickman's Aston."

Rickman's star ability to make any character and indeed any production his own and ensure it is most memorable for his audiences must be among the highest tributes for any actor. Both stage and screen will be far poorer with the loss of Rickman.

The Thomas Kilroy Archive is available at the Hardiman Library, NUI Galway and a catalogue is available to read here: http://archives.library.nuigalway.ie/cgi-bin/FramedList.cgi?P103

Posted by NUI Galway Archives at 3:40 PM No comments:

2.00     Panel 2: ‘The whole nation and all of its parts’?
Liam Kennedy (Emeritus Professor of Economic History, Queen’s University, Belfast).
Texting Terror: The Ulster Covenant and the Proclamation of the Irish Republic
Dr Mary Harris (NUI Galway)
The Proclamation and the Partition Question

Maryann Gialanella Valiulis (Trinity College Dublin)
The Proclamation of 1916: The Making of Equality

3.30     Keynote address: Dr Emmet O’Connor (University of Ulster)
How radical was the Proclamation?

Admission to this conference is free but pre-registration is advisable.


To register, email your name and institutional/university details (if any) to proclamationconference@gmail.com
Posted by NUI Galway Archives at 10:42 PM No comments: