'Through a Swedish Lens' exhibition now on at James Hardiman Library 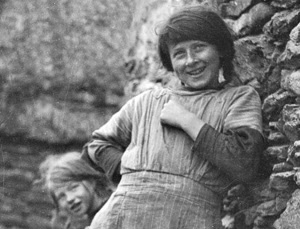 A new exhibition, Through a Swedish Lens, is currently on for the month of March at the James Hardiman Library.  This photographic exhibition, on loan from the National Folklore Collection held at University College Dublin, celebrates the contribution of four Swedish scholars and writers to Irish culture in the first half of the twentieth century. They include the celebrated folklorist Carl Wilhelm von sydow, the ethnologists Albert Eskeröd and Åke Campbell, and the writer Harriet Hjorth Wetterström. Each of them went on to play a significant role in advancing the study of Irish folklore and ethnology and in cultivating Swedish-Irish relations. The photographs featured in this exhibition present an incredible insight into Irish life, culture, dress, housing and landscape during the 1930s and 1940s.


The beginnings of this association can be traced to a chance meeting in a Dublin bookshop in 1921 between Sèamus Ò’Duilearag, at the time a Celtic Studies undergraduate at U.C.D., and Reidar Thorolf Christiansen, a Norwegian Folklore scholar. They maintained a correspondence over the following years, and Christiansen became  a strong supporter of Irish Folklore studies and a contributor to Bèaloideas, the journal of the Folklore of Ireland Society, which was founded in 1926, and of which Ò’Duilearga was editor.
Following a lecture delivered by Christiansen in Dublin in 1927, the Norwegian introduced Ò’Duilearga to the influential Swedish Folklorist Carl Wilhelm von Sydow, who was also in attendance. A fluent Irish speaker von Sydow was convinced of the potential for Folklore collecting and study in Ireland and its relevance to European Folklore scholarship. His interventions at critical moments led to the setting up of the Irish Folklore Institute in 1930 and most importantly, its successor, the Irish Folklore Commission in 1935, with Seamus Ò’Duilearga appointed director of both institutions.
The connections established  by Ò’Duilearga upon further research visits to Folklore and cultural institutions in Sweden, such as at Skansen, led to meetings with Folklorist Åke Campbell, whose photographs also feature in this exhibition. Carol von Sydow was a Sedish scholar who taught at University of Lund for many years. Already fluent in several languages by 1917, he started to learn Irish under the Norwegian Celtic Scholar Carl Marstrander. On a visit to Ireland in order to immerse himself in the Irish language, Von Sydow stayed on the Blasket Islands, West Kerry and also West Cork before travelling to Galway and the Aran Islands, collecting Folklore on his way. Eager to further document his travels around Ireland, the 300 photos he took comprise a unique and intimate portrayal of Irish life. 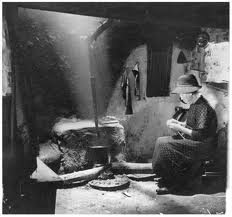 Åke Campbell undertook a month long expedition to Ireland in 1934 in order to document folklore and ethnological practices of the people and places he encountered in Galway, Kerry, Mayo, Sligo and Donegal, with a focus on building types, farming, fishing and other aspects of material folk culture. The photographic collection created by Campbell along his travels is again a unique pictorial record of Irish life.
Albert Eskeröd was a colleague of Campbell and a former student of von Sydow. He was part of the team that undertook a survey of Ireland  in 1935 focusing on an investigation of the eastern, southern and western districts of Ireland focusing on inland farming and coastal fishing practices specifically. Writing of his experiences in Ireland, Eskeröd stated it “was a beautiful country, this young Irish Free State, which nevertheless possesses traditions and a history older than any country in Northern Europe.”
Harriet Hjorth Wetterström was a travel writer and novelist and made her first visit to Ireland in 1946. She wrote a pioneering study, Irlandskust, in Swedish, of the coastal fishing practices and communities of the west of Ireland, travelling from Cork as far north as Donegal. Equipped with a camera provided by Eskeröd, Wetterström diligently compliled an exceptional pictorial record of her journey through Ireland.
The photographic collections of these for scholars complement each other into an exceptional exhibition complied by the Irish Folklore Archive in U.C.D. The exhibition also ties in with some of the many collections of the Archives and Special Collections service of the James Hardiman Library here at NUI Galway, such as the Delargy Book Collection, the library of James Delargy (Seamus Ò’Duilearga), Director of the Irish Folklore Commission, 1935-71. This collection contains over 4000 volumes on folklore, folklife and celtic studies.
This exhibition also connects with photographic material in other collections such as the Balfour Album. The Balfour Album of photographs was originally created in 1893-1895 by the Belfast photographer, Robert John Welch. It was a gift to the former Chief Secretary for Ireland, Arthur J. Balfour in recognition of his support for the building of the Galway-Clifden Railway. The album was presented to Arthur Balfour in the summer of 1896, a year after the railway had opened. The collection has been digitised and is available via the James Hardiman Library here
Through a Swedish Lens is on exhibition at the James Hardiman Library, NUI Galway throughout the month of March.
Posted by NUI Galway Archives at 11:45 AM No comments:

A New Home for Archives at NUI Galway

It is an increasingly exciting time here at NUI Galway as next door to the James Hardiman Library, constructions work is continuing at speed on the Arts, Humanities and Social Science Research Building.


The AHSSRB will house a hub for research at NUI Galway across a wide range of disciplines across the Arts, Humanities, Social Science and more. Key to this research building will be the new home for Archives and Special Collections of the James Hardiman Library. The move to this new purpose-built building will allow for a large-scale expansion of service by the Archives and Special Collections section as well as the other research bodies that the AHSRRB will house.
The new building will include bespoke designed environmentally controlled archival storage, a reading room of over 40 reader spaces, acclimatisation rooms for archives, processing room, digitisation centre,  lecture rooms, meeting rooms and a dedicated exhibition space to name just a few of the confirmed features.
The Archives and Special Collections service of the James Hardiman Library are delighted to be working in bringing you this exciting development to our service and look forward to welcoming you to our new home for research in Spring 2013. Here are some images that show the huge development happening here on campus at NUI Galway: 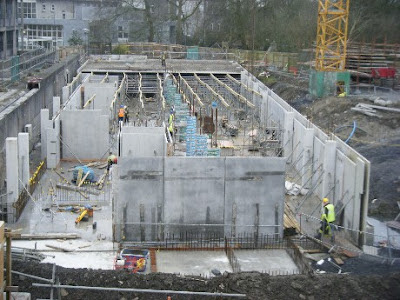 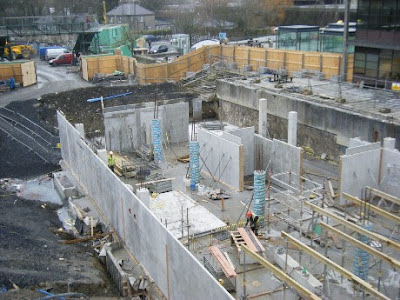 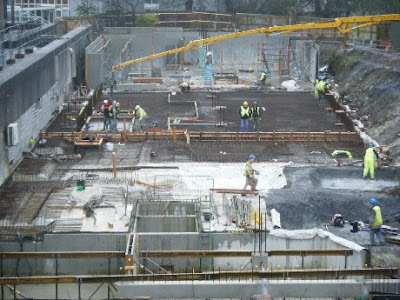 Posted by NUI Galway Archives at 9:54 AM 9 comments:

This day marks the birth of William Joseph Shields in 1888. A civil servant, his first interest was acting and he followed his brother Arthur into the Abbey, taking the stage name Barry Fitzgerald to avoid any problems with his employer. His best roles in the Abbey were in Sean O’Casey plays, and from the late 1920s he found himself in film roles. Deciding to become a professional actor, he toured with the Abbey in the States in the 1930s, going into the film business. His defining moment in film came in 1944 when he starred as Fr Fitzgibbon alongside Bing Crosby in Going my way (1944). Nowadays he is perhaps best remembered as the match-maker MicaleenOg in The Quiet Man by John Ford, shot here in Galway by John Ford in 1952, a film in which his brother Arthur also starred. He died in Dublin on 4th January 1961.

Today’s image, a letter dated 11 Dec 1959, is from Sean O'Casey, Flat 3, 40 Trumlands Road, St. Marychurch, Torquay, Devon addressed to Will (Barry Fitzgerald). O'Casey writes that he has heard that Fitzgerald was ill, he writes 'I hope you are up, or, if not up then sitting bolt upright in bed having another look at the world.' 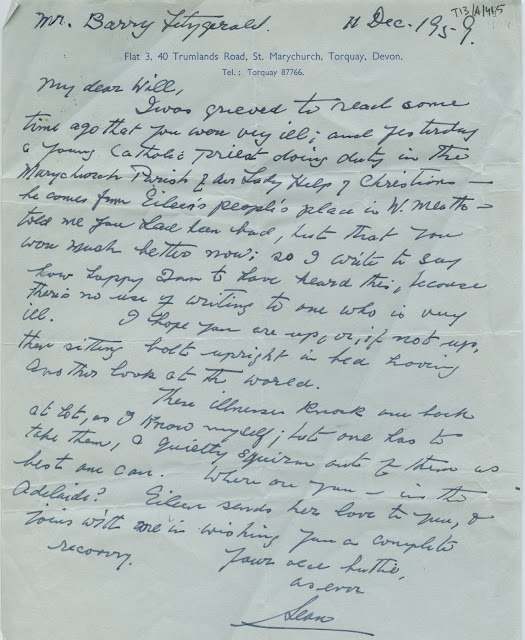 For more check out the Shields Family Collection, housed in the James Hardiman Library, a descriptive list for the collection is available at http://archives.library.nuigalway.ie/cgi-bin/FramedList.cgi?T13 .

Posted by NUI Galway Archives at 2:11 PM No comments: