For a festive themed update from the archives of the James Hardiman Library, we delved into our collections and discovered this wonderful overlap between two of the most prolific of literary and political figures from the West, Lady Gregory and Douglas Hyde. The pair penned a version and  presentation of The Nativity which took to the national stage, the Abbey Theatre, in Dublin and to the stage of the Lyric Theatre in Belfast many years apart, but not without incident in between.


The play would begin its life by being written in Irish by Douglas Hyde in 1902 and translated into English shortly thereafter by Lady Gregory. However, it would be 1911 before the play would reach the Abbey Theatre stage in Dublin.


It is noted in Douglas Hyde – Maker of Modern Ireland (Janet Egleson Dunleavy and Gareth W Dunleavy, University of California, 1991) how on one of Hyde's many visits to Coole Park, the home of Lady Gregory in Galway, how Hyde's playwrighting was inspired by his muse – Gregory – and flourished while writing in quiet solitude in Coole Park. "In late August of 1902, [Hyde's] diary entry in Irish for (August 25) reads, "They shoved me into my room and I wrote a small play in three or four hours on Angus the Culdee. Entitled An Naomh ar Iarraid (The lost saint), it was published in the 1902 issue of Samhain and performed in early 1903. A first attempt to adapt for popular theater themes and characters from the Irish manuscript tradition, it drew upon Hyde's reading and research in ninth-century monastic Christianity, especially the legends that had been woven around the figure of Aongus Céile Dé (Oengus the Culdee).


Encouraged by the ease with which An Naomh had almost written itself, Hyde decided that his next subject would be the Nativity; his source, a medieval miracle play.


Dráma Breithe Chríosta, Hyde's nativity play, was finished within the month that followed and published in the Christmas, 1902, double number edition of the Weekly Freeman, accompanied by a translation in English by Lady Gregory. There was trouble about it almost from the start. A 1904 performance scheduled for Christmas had to be cancelled when it became the subject of a resolution passed by priests in Kilkenny, criticizing some questionable passages that they perceived as causing possible confusion between superstition and dogma. Continually refused for six years thereafter, Dráma Breithe Chríosta finally had its premiere at the Abbey Theatre in January 1911, with Sara Allgood as the First Woman, Máire O'Neill as the Second Woman, and Máire Nic Shiubhlaigh as Mary. The Abbey sets were designed by Robert Gregory, Lady Gregory's son.


The production charmed both audiences and reviewers. Other productions followed. For almost a quarter of a century—until the offending passages were blacked out in a school edition of the play printed in 1935—no one took notice of the problem that had troubled the Kilkenny priests."


The Nativity play as written by Hyde and translated into English by Gregory did find its production on the Abbey stage in 1911 and again in December 1932. These records and indeed all of the Abbey Theatre productions are currently being digitised here in NUI Galway as part of our recent digital archive partnership with the Abbey Theatre. The Lady Gregory Library also resides as part of Special Collections here at the James Hardiman Library.

What people may not know about is that this Nativity was in fact also produced by the Lyric Theatre in Belfast in December 1950. The archive of the Lyric Theatre here at the James Hardiman Library notes material which includes that relating to the production of Nativity by Lady Augusta Gregory, organised and directed by Mary O'Malley prior to the formation of the Lyric Players Theatre. The files include a copy of the script with some handwritten annotations, and with a rough drawing of the set design, and two card-mounted photographs, one showing two female characters on stage, the other an image of the actors playing Joseph and Mary at the crib, two copies of a photograph of six male cast members and the introductions to each piece of entertainment, written by John Irvine.


As you can see in, these wonderful images of the Lyric production highlight what is not just perhaps a lost or unknown production of this Hyde/Gregory play but also how this piece, a direct product of the Irish Literary Revival saw professional productions North and South of the border over forty years apart.


For a full listing of the Lyric Theatre Archive click here


Posted by NUI Galway Archives at 11:14 AM No comments: 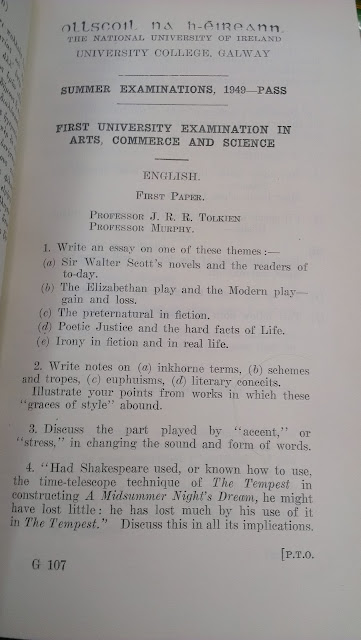