One of the most important tasks when cataloguing a large collection such as the Lyric Theatre Archives is to arrange the material in a logical and useful order before descriptions are created in the catalogue. At present I am collecting photographs, audio reels, scripts and programmes and organising them by theatrical production. This means that when they are fully listed, researchers will be able to easily locate and access all of the available media related to the specific play or event that they are interested in.
While that sounds like rather dry and perhaps even uninteresting work, the truth is that archivists will find some fantastic items while carrying out such work. This week I have mainly been working with programmes from the theatre’s long and varied history of productions.
A great job was done in collecting and preserving these programmes, with the majority of the theatre’s productions represented.
It is especially interesting to note which productions were staged several times over the decades. Researchers will no doubt find fertile ground here when comparing the similarities and differences between these different productions. 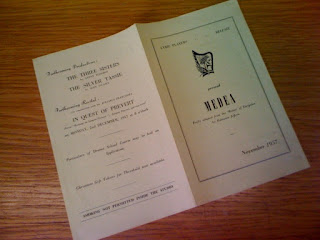 We can see here that the Lyric produced a version of Euripides’ Medea in November 1957, the same play that was recently staged to great acclaim as part of the Dublin Fringe Festival.
We can for now only imagine the insights to be gleaned between comparisons of the staging of this Ancient Greek play in 1950s Belfast and modern day Dublin. With the forthcoming availability of this collection,  the opportunity to do so will be offered.