Undoubtedly the most famous Northern Irish actor of recent years, Liam Neeson, started his acting career as part of the Lyric Players Theatre in the mid-1970s. He was hired by Mary O’Malley and quickly became an integral part of the acting company, participating in productions such as The Plough and the Stars (November 1977), The Colleen Bawn (December 1977) and most notably in Philadelphia, Here I Come! in 1976. His importance to the theatre was shown in Mary O’Malley’s decision to give to him one of the two Equity cards which she was able to obtain annually. He later moved to the Abbey in Dublin, and eventually then on to Hollywood. His career has gone from strength to strength since, and most of us will be familiar with his performances in Michael Collins, Schindler’s List, and Kinsey. 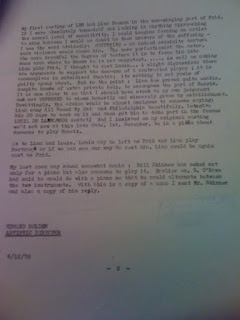 An item which has recently been discovered in the Lyric’s archives, though, shows that he was not always able to turn his hand to every type of acting! A memorandum written by the Lyric’s artistic director Edward Golden in December 1976 details how Neeson was not able to convincingly play the role of Hendrik in rehearsals for the musical A Little Night Music (please click the picture to see an enlarged version). Golden describes the ‘exquisite torture’ for Neeson, as ‘the more perfectionist the actor, the more dreadful the degree of torture it is to force him into some area where he knows he is not competent’, and bemoans that he allowed his original casting of Liam in the non-singing role of Frid to be changed by other people’s opinions.
Despite this brief hiccup, Neeson remains the most successful acting alumnus of the Lyric Theatre and one of its most vocal supporters. As the current patron of the theatre, he has overseen the incredible fundraising efforts made in the past few years for the rebuilding of the Ridgeway Street theatre. He explains the reasons behind his commitment to the Lyric as follows:

'In the face of deep divisions that keep our communities apart, the Lyric serves as a powerful unifying force, providing a safe and neutral space in which people from different backgrounds come together to be empowered, inspired, engaged and entertained. I really believe in the power of theatre to break down barriers and heal in a very deep, fundamental, spiritual way. And Northern Ireland needs that. It needs the Lyric Theatre.'