Freud: A Huston and Sartre Collaboration

Bent on making a film about the famous psychologist Sigmund Freud, Huston decided to have Jean-Paul Sartre (a French philosopher) write the script for this screenplay. Huston had previously worked on a film with Sartre and was convinced Sartre was the perfect man for the job.
In 1959, after first writing an initial 700 page script (which was far too long), Sartre came to Huston’s home in Co. Galway to work on its dialogue. There was no love lost between them. One of the stories that came from this visit is that Huston was unable to talk to Sartre as every time he tried to speak he was always beaten to the chance by the philosopher. Reportedly Huston said about Sartre on the occasion that ‘he talked incessantly and there was no interrupting’ him; while on the other hand Sartre wrote that Huston was ‘perfectly vacant and literally incapable of speaking to those whom he invited’. Huston thought the script was far too long and needed to be shortened. Sartre was infuriated and in response wrote a longer one still.
The first original Sartre script for Freud, with many manuscript corrections by John Huston, is now available to be seen in the Huston archive in the James Hardiman Library. Needless to say there was never a collaborative effort between Sartre and Huston again. This script is testament to their fraught relationship. 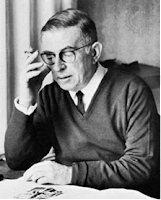