Advent at the Archives and Special Collections - 6th December

Today's images come from the Bairead Collection. They are from Christmas cards in Irish in the early twentieth century, published by Connradh na Gaeilge in an effort to encourage use of the Irish language. As first Treasurer of the Gaelic League Stiophan Bairead would have been in charge of the Publications Committee, who were behind the campaign to get Irish language Christmas cards into wide circulation. 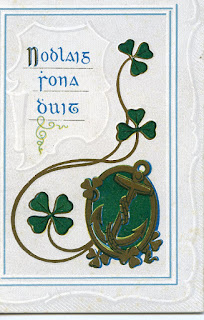 Stiophan Bairead was born to Stephen Barrett and Sheila O'Beirne in Kilmore, County Roscommon on the 22nd August 1867. His father was a well-to-do farmer, and had held the position of barony constable at the time. Stiophan was one of nine children who all received a good education, the boys in the Grammar School in Athlone, and the girls in convents in Athlone and Sligo. 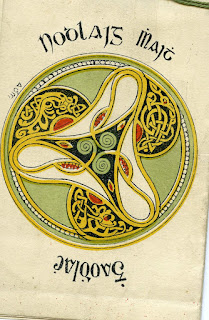 When Stiophan was eleven he was in a bad accident which took him three years to recover from. When he finally left hospital in 1882, he had a permanent limp. He was educated at home and developed a good head for figures. He also read voraciously at this time, and at nineteen became interested in the Irish language movement. He corresponded regularly with a number of people, including R.J. O'Mulrenin of the Gaelic Union. He was also a member of the Society for the Preservation of the Irish Language and the Irish National League. He moved to Dublin, learned Irish, and began to give classes to the Celtic Literary Society, He was active in Connradh na Gaelige from its foundation as Treasurer, and by the turn of the twentieth century he was working full-time for Connradh as well as organising the "Oireachtas". He got to know many people through his work, including Padraig Pearse, working on the financial side of "An Cliadheamh Solus" as well as the foundation of Scoil Eanna. 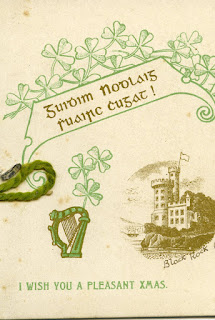 In spite of the trouble which occurred at the Dundalk Ard Fheis in 1915 when An Craoibhin resigned as President, Stiophan continued on, looking after financial matters and doing the work of officers such as Sean T O Ceallaigh when they were in prison. He was arrested after a raid on Connradh offices uncovered a small quantity of ammunition in November 1920, but he was subsequently cleared of the charges brought against him. He died suddenly while attending mass with his daughter Sighle on 26th March 1921. 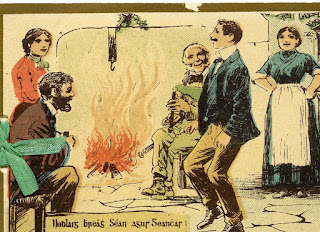