With a range of activities including establishing and running a theatre, directing plays, editing a literary magazine, serving as a city councillor and raising a family, Mary O’Malley was a formidable woman. In her autobiography Never Shake Hands with the Devil she writes of how she often had to rely on au pairs and other household help to manage all of the demands on her day. It’s still astonishing that she could  fit all of this work into her time. 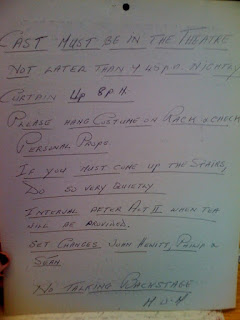 In this she was undoubtedly aided by her husband Pearse. Despite his position as a consultant in Belfast’s Mater Hospital, and his private surgery hours, he played a huge role in the administration of the Lyric, serving on the Board of Trustees until the 1990s. Another interest of Dr O’Malley’s was the Clan O’Malley, an organisation uniting descendants of the clan and of their most famous ancestor, Granuaile (Grace O’Malley). He played an instrumental part in establishing the Granuaile Trust, which sought to facilitate genealogy research and to build a heritage centre in Westport, county Mayo.
With such busy lives, it’s perhaps no wonder that Mary O’Malley found she had to be firm with those around her; this list of rules for her actors was found written on the reverse of a playbill!
Sarah Poutch
Posted by NUI Galway Archives at 12:16 PM