As winter approaches, and one of the most important events in the Irish language calendar, the Oireachtas, draws closer what better time for an update of progress on the Conradh na Gaeilge archive. This is the third blog in a series which is designed to give you all a “behind-the-scenes” view of the work of the archivist - i.e. moi! In the first blog of this series I noted the various stages vital to processing a collection before it can be made available: know what you have, make it safe, appraise it, decide on an arrangement, catalogue it, consider what should be made accessible and then release it. The second blog discussed appraisal in more detail and showed the value of breaking this vast project up into three stages: The First Pass (where the contents of every box are removed, examined, listed and re-housed in special archive boxes which are then stored in secure climate-conditioned storerooms), The Arrangement and The “Final Countdown”.

This blog follows on from the last and will cover the work that goes in to deciding on an arrangement for a collection, before also discussing the final phase in this ongoing work. 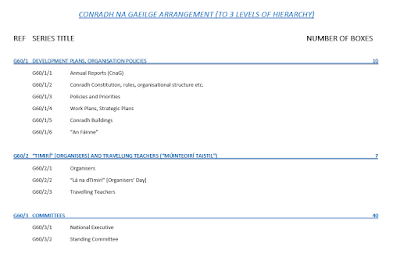 
At the end of what I’ve termed The First Pass the entire collection has been made safe from the elements, we know what’s in it (to a basic level), and we know roughly where to find it.

The next stage in the process is to come up with an arrangement. The arrangement of a collection gives us intellectual control over it, gives it structure, and lays the ground work for making items easily discoverable to researchers down the road by grouping related material together under distinct categories in series / sub-series / files etc.

This stage is broken into two parts:

Firstly I needed to come up with a logical arrangement that made sense of the collection and made everything as discoverable as possible. Normally with a collection the archivist would try to retain any existing arrangement within it. However unfortunately for us this was not possible. During the 125+ year period covered in the collection Conradh headquarters moved six times, and had 32 presidents covering 35 terms. Material was stored in several locations including offsite storage, and had no discernible arrangement. Different secretaries had different work methods over the decades, and the material had clearly been moved and mixed up several times from when it was first generated. (This is completely normal for such a large and long running organisation!)


Once I had come up with an arrangement, I then needed to physically put the items together under this structure. This meant starting at the first category of the arrangement and removing items relevant to that category from every box that held such items, which in some cases was numerous. As you can all imagine this is a time-consuming, but important step. Until the physical part of arrangement stage was completed, items relating to a specific topic were still scattered throughout the collection.

So what is the Arrangement?


The arrangement I decided on comprises three main sections totaling 45 series. (Yes! This collection is HUGE!!!)

This arrangement now gives me a structure from which to issue reference numbers to every series, subseries, file and item. For example the Conradh na Gaeilge collection has been given the code G60. With 45 series in all, I know that series codes will run from G60/1 to G60/45 and numbering will continue according to the hierarchy of the arrangement e.g. the third file in the 2nd subseries of the 19th series will be given the code G60/19/2/3!


Once the second stage has been completed it is then time to catalogue the collection. Until the cataloguing has been completed it is still not possible for the researcher to browse through a finding aid to know what can be viewed from the collection. Cataloguing involves giving a description to a collection, series, subseries, file or item which not only describes it but gives it its context. There are standard data fields a professional archivist must complete at this stage, following strict descriptive guidelines to adhere to best practice. This information is then entered into the CALM (Archive) database.

With a collection of this size, the safest way of ensuring best practice is maintained is to describe the collection from collection level down to file level or even item level in stages, ensuring each stage is complete before moving on to the next. I’m happy to say that Collection Level description and Series Level description are now complete. I am now working on listing to a lower level of hierarchy (eg subsubseries / file) and am even happier to announce that because there has been so much interest in this collection and because it is so vast, rather than waiting until the entire collection is described fully, we will instead release parts of the collection in tranches, as they are completed. I will do this as fast as I can, but please be patient! When a tranche is released, it doesn’t mean the next one will be hot on its heels! 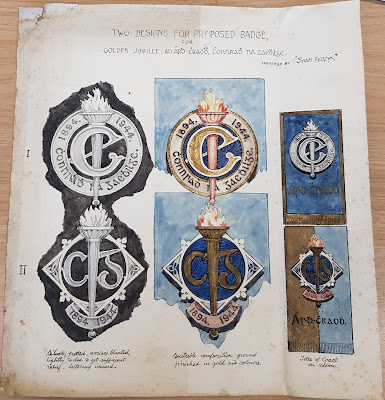 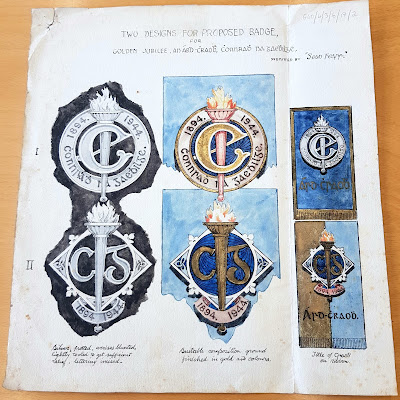 
I have previously mentioned two further considerations that take place at this stage, namely making decisions on accessibility based on GDPR and other considerations thereby adhering to various legislation, and secondly selecting items for digitisation. Where a collection is small (several archive boxes, for example) it can be easy to find the resources to digitise it in its entirety thereby making the whole collection available (bar records which would have to be closed anyway to adhere to GDPR etc.). With a collection as gigantic as this one, it is simply not feasible in practical terms to digitise it all. Issues such as time, cost and storage raise their ugly heads, unfortunately. So too does the difficulty in retaining context for every image, in particular if it has not been listed to item level. Therefore careful and pragmatic selection is required - as I continue to process and list the collection, I am flagging items which could be digitised at a later point.


So on to the good news! As mentioned previously we will be releasing in tranches to allow researchers access completed parts of the collection prior to the overall completion of listing. These tranches will be released at intervals over the coming year, as work is complete. Series are being prioritised for release based on a number of factors including size, interest for the researcher, recommendations from the special interest group, ease of release and GDPR concerns (or lack of).


The first tranche to be released ahead of the Oireachtas consists of six series: “Branches, District Councils and Provincial Executives”, “Comhaltas Uladh”, “Drama, Theatre and Film”, “Sport”, “Patrick Pearse” and of course “The Oireachtas”. Material of particular interest relates to the London and Central branches of CnaG, letters from Brendan Behan and Seán O’Casey relating to plays in Irish, material relating to Scoil Éanna, posters, programmes, invites, and competition medals. In total 72 boxes of material will be opened for access covering a time period from the 1890s to the present day. However to truly appreciate the richness of material in any of these series, the best advice is to give yourself a day off, visit us in NUIG and trawl through the boxes! 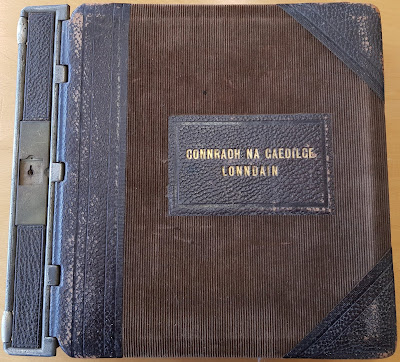 
The next tranche will be released (all going well!) shortly before Christmas with subsequent releases following in 2020. To keep track of these releases keep an eye out for further release announcements either through this blog series or on twitter (@nuigarchives).

In the meantime enjoy the little taster of images included here!

Until the next time,